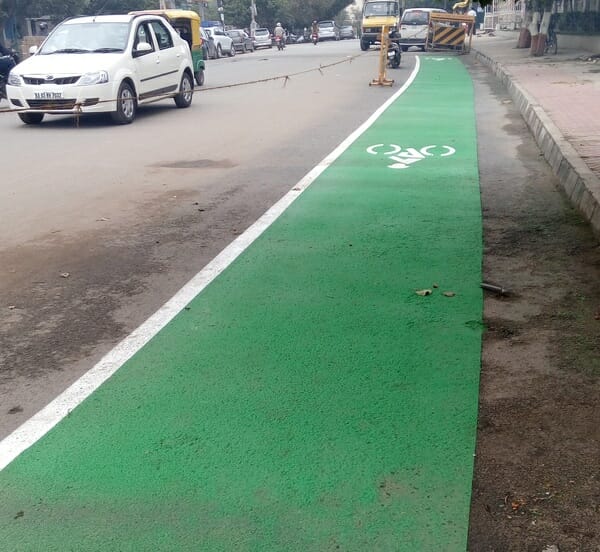 HSR Layout in Bengaluru is in news yet again for the proposed cycle lanes. A 35-metre long green lane painted with images of cycles is arousing curiosity among people. What’s going on? Has this been tried elsewhere in the city? What were the results? Will HSR Layout plan survive the test of time?

Bengaluru got its first cycle track on public roads in 2012. Separate cycle tracks were laid on about 40 km stretch in Jayanagar with the Department of Urban Land Transport (DULT) funding Rs 2.5 crore.

But within months, the project became a failure, thanks to lack of enforcement. In the absence of alternative parking space, motorists began to use the lane for parking their vehicles. The attempt to introduce ambitious cycle lane in the city soon went futile.

DULT and BBMP have come up again with yet another cycle lane project, this time for HSR Layout. With some changes in the project plan, they intend to make it a successful and working model in the city. HSR Layout, a posh locality of Bengaluru  has been chosen for the project.

Residents of HSR Layout were indeed taken by a surprise to see the workers laying a green lane on a small stretch of a road near Basaveshwara temple this week. The demand for cycle lane in HSR Layout is not new. This Layout has a Cyclists’ Club to its credit and around 300-400 cyclists use bicycle as a mode of transportation. DULT had plans to introduce cycle lanes in HSR Layout earlier too. (Some details are here.) This did not take off for various reasons. 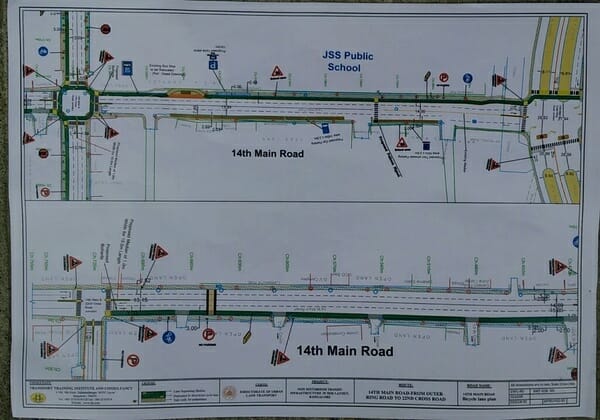 What is the cycle lane project all about?

DULT has conceptualised the idea of laying separate bicycle paths for a stretch of about 22 km (1.5-2 metres width) in HSR Layout, thereby creating an elaborate network of cycle paths. Of the 22 km stretch, 12 kilometres will be dedicated tracks for cycles, whereas, the remaining 10 km will be mixed tracks. Mixed tracks are made on narrow footpaths which could be used by cyclists as well as pedestrians, Basavaraj Kabade, Executive Engineer at Traffic Engineering Cell, BBMP informs Citizen Matters.

On a pilot basis, Mumbai-based firm, ITF Coatings has laid the coating on 35 meters stretch near Basaveshwara temple. “We are laying the cycle lane using resin-based cold mix which is a colour coated glass aggregated paint. This is expensive, skid-resistant, is highly used in international level and has also been used in cycle tracks in Delhi and Pune,” Kabade says.

To a query on when the cycle track will be laid on the 22 km stretch, the EE said that the tender has been floated recently and it will be closed in 60 days. “We are planning to finish the work in 8-months time once it starts,” The project is fully funded by DULT. It has invested Rs 18.5 crore on the cycle track project for HSR Layout.

What are the takeaways from Jayanagar cycle lane project?

DULT and BBMP seems to have learnt some lessons from the failure of cycle tracks in Jayanagar. In Jayanagar, no new track was laid for cyclists. The lane was separated merely by laying a new coat of bitumen.

With lack of clear segregation of cycle lane and in the absence of parking area for vehicles, motorists easily used the cycle lane for parking the vehicles. But in HSR Layout, the green cycle-friendly tracks are made and barricades too would be put up to prevent motorists from using the track. Kabade says it is a comprehensive project which will also include providing parking facility for all vehicles. “We hope that by providing parking arrangement for other vehicles, the vehicle owners would avoid using the cycle lane for parking,” Kabade says.

‘Enforcement is the challenge’

One of the criticisms that the authorities faced for failing to maintain cycle lanes in Jayanagar was the involvement of multiple agencies in the process and lack of coordination among them. If DULT planned and funded the cycle lane, BBMP implemented the work, whereas the police department was responsible for enforcement. Finally, all the three departments failed, right from planning to enforcement. But this time, the first two agencies have brought modification in the planning and implementation part, and the responsibility lies largely on the traffic police to enforce the rule.

“Enforcement is a huge challenge. We should ensure that people do not misuse the cycle lanes. We hope that traffic department will strictly enforce the rule once the lane is laid completely,” the official hopes.

Where will buses stop on cycle-laned roads?

Kabade says that cycle crossings will be given near bus shelters, so that buses and passengers do not face inconvenience. Also, some changes will be made in junctions and signals, so that cyclists and pedestrians get the priority to cross the road. (Citizen Matters has requested Kabade and DULT officials to share the detailed plan for HSR Layout cycle lanes, but we are yet to receive it.)

However, some cyclists don’t see any sense in having separate cycle lanes inside the city. “Cycle lanes only make sense if there is a long stretch of road without intersections, which doesn’t exist in most parts of Bangalore,” says Ramesh Sreekantan, an avid cyclist living in Malleshwaram. He says bike lanes were built in Bangalore University campus which no one used. He says discouraging passing traffic from entering residential areas will help cyclists who want commute within the neighbourhood.

Elevated east-west and north-south corridor and property tax board are among the prominent promises of Congress party.

BBMP to set up a new waste processing plant, company transport buses denied entry into BMTC priority lane, Ola launches self-drive cars – read more what else happened in the city over the past week, in our roundup

New traffic plan in Whitefield: Give your feedback!

Whitefield route plans have changed. You might also have been affected positively or adversely. Give feedback!