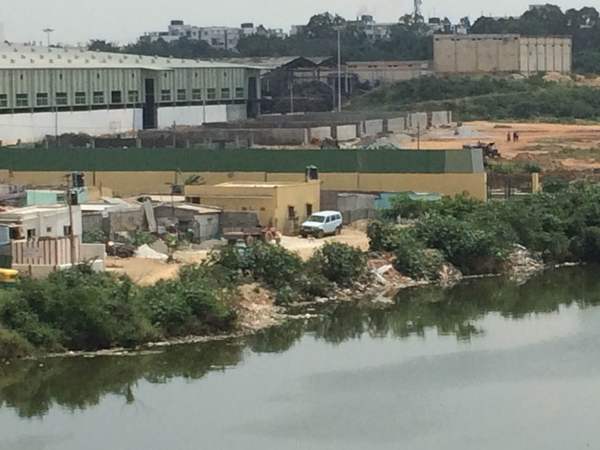 KCDC plant located on the banks of Somasundarapalya lake in HSR Layout, is causing pollution much to the discomfort of residents. Pic: Anis Pandela

A Facebook page created by a group of HSR Layout residents reads “Right to Breathe – Control KCDC from becoming life threatening.” This page aims at garnering public support for a protest that the residents have planned to stage in front of Karnataka Compost Development Corporation (KCDC) unit at Somasundarapalya on October 31st.

Protests are not new for the residents of Somasundarapalya, Mangammanapalya and HSR Layout. They had staged at least three protests last year alone, demanding that authorities take measures to prevent stench emanating from the KCDC’s composting unit. Since the residents see no improvement in the situation and continue to suffer from odour, this time they have decided to hold a mass protest.

“Time to stand up and speak for ourselves. Let’s tell the authorities that we have the right to breathe. We have had enough tolerance towards foul smell, let’s not take this any more. Bring in more people, make your words heard. Let us get rid of this nuisance from our vicinity….,” reads the Facebook page. The page has over 270 people confirming their participation in the protest. Organisers are expecting at least 1,000 people to gather at the protest venue.

There are photographs, articles and videos from ground zero posted on the page to effectively communicate problems that they are facing due the plant.

No respite from stench

“Leachates generated in the plant flow into Somasundarapalya lake located adjacent to KCDC. Garbage processing and leachates are contaminating the groundwater table. Apart from independent houses, there are about 70-80 multi-storied buildings in Somasundaraplya-Mangammanapalya area. People residing in the area are forced to breath polluted air and use contaminated water. We are suffering from health problems like lung infection, skin and eye diseases,” he complains.

Murthy clarifies that they are not against composting, but the process has to be done in a scientific and hygienic manner. “HSR Sector II RWA has been engaging with civic authorities since 2003, but nothing has been done concretely to solve the problem so far,” he notes.

The residents of HSR Layout are disappointed at how their previous protests and demands have been ignored by the authorities. Anis Padela, an IT professional who is spearheading the protest campaign says this time the protesters will place just two options before the authorities – shut down the plant or fix the problem. “Our demand is clear. Do not take away our right to breathe clean air. Let the KCDC and BBMP take scientific measures to curb the stench emanating from the composting plant and ensure that polluted air does not go out of the plant,” he says.

Anis has also proposed a few solutions to BBMP to address the impeding problem. After a bit of study and research, he submitted a list of solutions to the High Court during the hearing of solid waste management petition. One of the solutions he had proposed was to rope in National Institute for Interdisciplinary Science and Technology based in Thiruvananthapuram, in an attempt to introduce biofiltration in the plant.

Residents of HSR Layout talk about the problems that they face on account of their proximity to the KCDC plant. Source.

“I believe that the issue could be solved by adopting two measures. Firstly, by reducing the intake of waste and limiting it to 70-80 tonnes a day. Secondly, to control the odour with the help of biofilters,” Anis says.

In addition to the impending problem, the recent announcement made by Bengaluru Mayor of increasing the capacity of Somasundarapalya KCDC plant to 850 tonnes, has upset the residents. “Our main demand is to reduce the garbage intake and limit the plant to process waste generated in HSR Layout and nearby areas, rather than receiving waste from across the city. In that case, the total waste will not exceed 70 tonnes a day. The plant will perhaps function well if there is reduction in quantity of waste received,” he opines.

Residents of this area ended their protest last year after the authorities including the MLA who participated in the protest assured them of taking measures to prevent the stench. In fact, Anis Pandela and his team suggested the then SWM Special Commissioner Darpan Jain to implement biofilter system in the compost plant for odour control.

“Special Commissioner accepted the idea and the legwork began. BBMP and KCDC jointly started biofilter initiative one year ago, but the system has not yet become a reality,” Anis says.

Biofilter method normally used in fish mills for odour control is being adopted by KCDC. It is for the first time in the country that this odour control method is used in a compost plant. The technology is implemented by NIIST, Thiruvananthapuram.

In June, KCDC officials had promised of completing the work within three months. It has been four months now, but the system is not in place yet. KCDC Advisor Venkoji Rao informed Citizen Matters that the civil work has been completed, but mechanical work is pending. He said he was not aware why there was delay in starting the mechanical work and it is BBMP’s responsibility.

“The stench was under control for sometime. But when the garbage dumping was stopped in Bingipura, we began to receive an additional garbage of 200 tonnes everyday which continues even to this day. This additional garbage enters the plant as against the plant’s actual capacity of handling 200 tonnes. It has become quite difficult to handle the additional waste due to which stench has increased,” he explains.

When asked about how the plant could handle 800 tonnes of waste (as announced by the Mayor) as against its capacity of 200 tonnes, Venkoji Rao said the additional waste could be processed after the arrival of Rs 17 crore-worth new waste processing machinery. “Though the machinery had to arrive by now, I do not know why it has not arrived yet,” he says.

KUIDFC General Manager Ashok Jain tells the reasons for delay in implementing new odour managing system and arrival of new machineries. “Due to election code of conduct, there was delay in issuing work order for biofilter technology. Work has been awarded now and the contractor is expected to start the mechanical work this week. The contractor has been given a time of six weeks to complete the work. We hope that the biofilter technology will help solve the problem,” he adds.

MLA backs citizens protesting against KCDC
How is wet waste processed at the KCDC?
60,000 tonnes of waste dumped in KCDC landfill; composting stopped
Will the KCDC neighbourhood finally be free of smelly nights?
HSR Layout, forget rotten garbage; brace yourself for pleasant aroma!

How to manage sewage at zero cost: psst, the answer is biogas!

KSPCB introduces new norms for STP treatment – this is going to affect apartment STPs. Why incur a huge cost of this treatment, when there is a simpler, cheaper option, asks Dr Ananth Kodavasal.

What does Rs 1,700 crore ‘Smart City’ plan for Bengaluru involve?

Bengaluru is finally becoming a “Smart City” – but what does it mean? Which areas will get covered, which projects will get implemented?