Amid the scams hitting the Karnataka Compost Development Corporation (KCDC), the firm is stepping up to the challenge of reducing odour emanating from the plant by installing a biofilter system. The Rs 2 crore project, which involves filtering the air from the compost shed, will be ready in another three months, according to KCDC advisor Venkoji Rao. 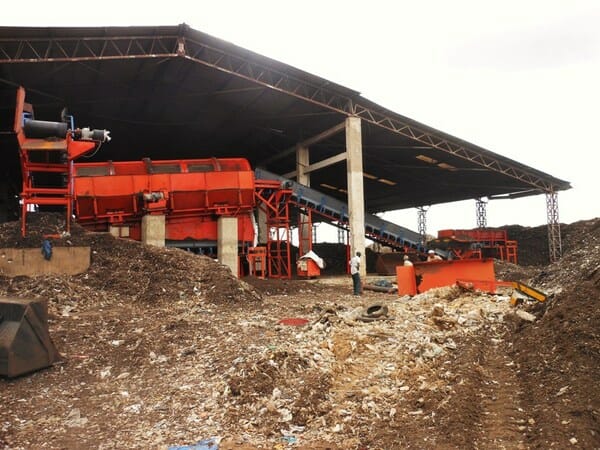 The unbearable stench arises when the composting windrows are turned in KCDC, four times a month. In the new biofilter system, four tanks are constructed, which will be filled with waste, water and coir. Enzymes will be released into the pit which start reacting and kill the stench-generating bacteria that exists in the pit, claims Venkoji Rao.

The construction of a shed where windrows will be housed was completed a month ago, though large glass windows are yet to be fitted in place, to seal the shed for air suction. The filtering system is situated in a recently procured 14-acre plot right next to the shed, and building of the machinery has begun.

Until this begins functioning, KCDC wants to use an imported spraying system technology from Ecolo, an odour-control technology firm based in Canada. Sadhana Environment, a subsidiary of Ecolo, works on behalf of the Canada-based company, in Bengaluru. A sprinkler system will be set up, from which a chemical will be sprayed every half an hour when the windrows are turned. This is expected to neutralise the odour and give out an aroma. Costing around Rs 10 lakhs, it is currently in trial run stage and is likely to operate in a full-fledged way within four days. During the trial run, the company used a chemical that emitted an apple-scented aroma. A decision is yet to be taken about the flavour to be used once spraying system starts functioning in a full-fledged way.

Rs 16 crore-worth of waste processing machinery from Hydro Mech Technology is expected to arrive soon at the plant. “Work order for the machinery is given. After commissioning the processing machinery, we will take up mining of the old waste dumped in KCDC premises to simultaneously process it along with fresh incoming garbage”, says Venkoji Rao. The plant accepts around 130-150 tonnes every day—30 of which is vermi-composted while the remaining undergoes aerobic decomposition, according to KCDC. Once the new machinery starts operating, KCDC will accept 400 tonnes of waste a day, says Venkoji Rao.

The BBMP, says Venkoji Rao, will be giving KCDC six more excavator and loader vehicles to help in processing the waste. Some of the transport trucks that the BBMP has hired, however, are faulty, because they drip with leachate from the wet waste inside. This leachate makes the roads on which the vehicles travel dirty. It could also be irritating on the skin, and can join the water sources to contaminate them, apart from causing stench.

Venkoji Rao feels that the BBMP should hire proper compactor vehicles to transport the waste. The terrain too, in KCDC, is highly uneven for trucks to pass through smoothly. While roadwork has begun, he isn’t certain as to how long it will take to develop concrete roads in the 30-acre plant.

Last year, the local MLA Satish Reddy alleged that KCDC was accepting 500 tonnes of mixed waste per day, causing an unbearable stench in the area. The residents demanded that the plant be shut down.

Venkoji Rao claims that they accept only wet waste from places like Madiwala and KR Markets, where strict segregation happens. He also says that 5% plastic waste that comes along is filtered out and handed over to Ampolt Electronics India Pvt Ltd, who converts it into diesel, gas and carbon.

However, the reality seems to be different. During a visit by this reporter, it was found that the unit receives a lot of plastic and dry waste which are segregated to some extent. Some portion of it is processed along with compost, while the remaining is dumped in the Corporation premises. The plant still has too much waste waiting to be processed. Read this Citizen Matters article about waste being dumped in a landfill inside KCDC to know more about it.

Will the KCDC neighbourhood finally be free of smelly nights?
How is wet waste processed at the KCDC?
MLA backs citizens protesting against KCDC
60,000 tonnes of waste dumped in KCDC landfill; composting stopped

About Timothy Jairaj 2 Articles
The author has not yet added any personal or biographical info to her or his author profile.

For many northeastern migrants in Bengaluru, CAA-NRC a ‘grey’ area

Many members of Bengaluru’s northeast community support the NRC, but acknowledge that the issue is complex

No land for firestations in Bangalore

The Fire Department is trying to source land on the outskirts of Bangalore, to establish more fire stations. It appears the city has land for everything else. There is also the usual shortage of staff and vehicles.