There is an element of awe when you witness the bustle at a government office, a constant murmur, people with some paper or file in their hands, some asking strangers for a pen, tiny tea cups making rounds behind desks of different sizes—never a dull moment.

In a sub registrar’s office, in addition to the usual buzz, one would most likely feel the thick air of tension of the many deals waiting to be signed and sealed. Only relaxed faces there are likely to be those of couples waiting to get their marriage registered, sometimes with garlands and sweets handy.

The State’s Department of Parliamentary Affairs and Law has proposed that registering a marriage within a set time frame from marriage be made compulsory. The Karnataka Marriages (Registration and Miscellaneous Provisions) Act, 1976, with several proposed amendments, has been forwarded to the State Law Commission for its opinion. The Supreme Court had directed the states and union territories to ensure compulsory registration of marriages, but it has not been implemented yet.

Why do marriages need to be registered?

The Marriage Certificate is a legal document and can be used as a document of proof of marriage in several situations.

Under what laws are marriages registered?

Procedures that need to be followed for registration or solemnising a marriage are listed on several websites including the Department of Stamps and Registration. At a Sub Registrar’s office, marriages that are conducted under various religious ceremonies can be registered and marriages can be solemnised by the Sub Registrar who is also the Marriage Officer. By law, the Bridegroom must have completed 21 years age and the bride 18 years at the time of marriage.

Marriages are registered under the following Acts:

Where can the marriages be registered? 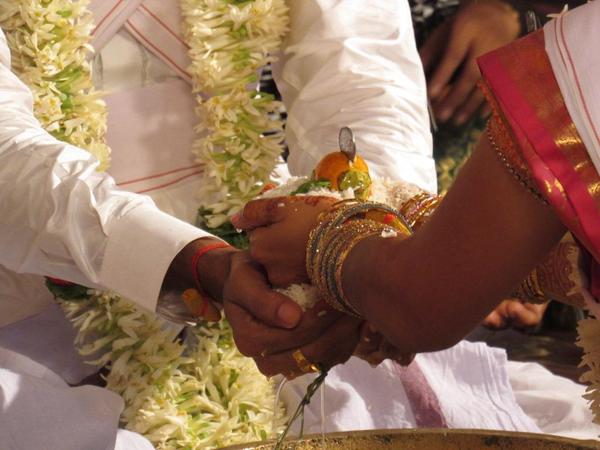 Getting a registration certificate for your marriage is as important as marriage itself. Pic: Vishwas B P

How to register a marriage under the Hindu Marriages Act?

The application form for marriage registration needs to be filled with information like the name and address of the bridegroom and the bride, signature of bride and bridegroom, signature of 3 attesting witness present at the time of marriage along with their name and address. Photograph (6 copies, with signature across the photo) of the couple ie. bride and bridegroom  should be presented to the Registrar of Marriage, marriage officer will verify the contents of the application and records. He will issue certificate of marriage if he is satisfied that the records produced are in accordance with law.

How to solemnise a marriage under the Special Marriages Act?

What is the procedure for Registration under Parsi Marriage and Divorce Act, 1936?

How can a marriage conducted according to religious custom be registered under Special Marriages Act?

To register under the Special Marriages Act, the filled application form should be given along with the prescribed fee, to the sub registrar. If there are no objections, marriage officer will register the marriage after 30 days if the husband and wife appear along with three witnesses subject to following conditions:

What are the conditions to be adhered prior to registration / solemnisation of a marriage?

What is Degree of prohibited relationship?

Hindu Marriage Act 1955 defines the degree of prohibited relationship in detail. It is the list of relationships related by blood, that should be avoided while choosing the bride or groom. This has scientific basis, and aims to prevent the birth of children with deformities. This is caused because of genetic disorders that arise due to the mixing of the genes in the same gene pool that is present in the family. The degree of this risk varies with the degree of relationship.

For the same reason, usually a marriage within a Gothra is banned in Hindu religion, as a Gothra is considered as a family tree related by blood. The Hindu Marriage Act 1955 does not solemnise such marriages by way of registration.

The table below based on this shows the prohibited relationships in which people cannot marry each other.

Here’s how you can bring home a bundle of joy through adoption
How to search for your life partner online
Be prudent while buying medicines
Be careful while buying an under-construction property
How to choose a washing machine?
How to ensure your dream house doesn’t collapse?
Overcoming the Occupancy Certificate hurdle to your dream home

Why integration of Metro with Railway station is needed at Cantonment

BMRCL had planned the integration of its station with Cantonment Railway Station, but changed it later. When people sought reasons, many were given, of which none seems valid enough!