August 6 was World Organ Donation day – a day to celebrate the spirit of organ donation, the process of giving life to another human by donating an essential part of one’s body; to become useful even in one’s death, to leave behind something that will light up another life.

How does one donate his/her organ? Well, except for kidneys, not while one is alive. Donating organs while alive, or transplanting organs of a live human is illegal. Transplantation of Human Organ Act – 1994 mandates that the organs be removed only from a dead body of a donor, with consent from family. 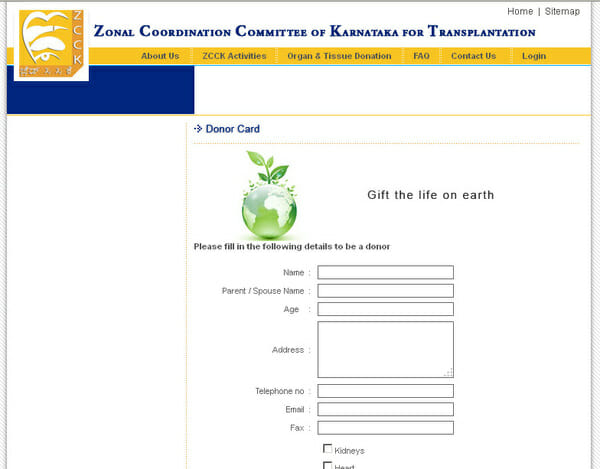 Form on the authorised website for registering for organ donation.

How to register for organ donation?

First, if you want to donate your organ in the event of your death, you have to register yourselves as donors with the Zonal Coordination Committee of Karnataka for Transplantation (ZCCK). This is free of cost.

You can also register with ZCCK online. A pledge card will be sent to you through post or you can also call them on 9845006768 and soon they will be at your doorstep, with a registration form.

Irrespective of gender, religion or race, anyone aged between 5 to 60 years can donate organs. If the donor is a minor, i.e. under 18 years, he or she is required to submit the consent of parents or legal guardian.

Any healthy person can donate organs. HIV, Cancer or Junior Diabetic patients should preferably refrain from transplantation, but at the time of brain-death they can be tested for any organ fit to be transplanted.

While registering for donation, two witnesses are required, of which at least one should be a family member. The details of the donors will be kept confidential.

Zonal Co-ordination Committee of Karnataka for Transplantation (ZCCK) is a government-recognised body under whose guidance and authority organ transplantations can be carried out in licensed hospitals of Karnataka.

Jency Antony, Chief Transplant Officer, ZCCK, says: “There is lack of awareness in the state and unwillingness from the family regarding organ donation, mainly because of the grief of death.”

Unlike Singapore, Malaysia, Spain, Israel where organ donation is carried out on the basis of presumed consent, which allows organ donation without the consent of family as the body as government authority, India needs the permission of family.

“Transplantation of Human Organ Act-1994 does not give provision to carry out presumed consent. A family consent is must,” says Jency Antony. “Doctors who treated the patient should convince the family to permit removing the organ which will save another’s life.”

She emphasises the need to appoint a special counsellor or a doctor to convince the family of the brain-dead patients, as many brain dead cases go without transplantation due to lack of awareness about the donation. Hospitals in Mumbai, Hyderabad, Chennai and Ahmedabad have already appointed professional grief counselors to convince the families.

There are 40 licensed hospitals all over Karnataka. However, they are mostly city-centric, with majority of them being in Bangalore.

Can one sell or buy organs?

Many nonprofit organisations try to get involved in organ donation. However Jency says: “Donors are not recommended to approach them. NGOs’ duty is to create awareness about organ donation.” Pledge cards will be available at hospitals for any person interested to donate organ.

When to donate organs?

“There is no age limit or any criteria for donating organ,” says Jency. “We encourage everybody to donate organ. We carry out tests on the patients prior to retrieving the organ. If the organs are fit we use it.”

What organs can be donated?

When can organs be donated?

Organs and tissues can be donated at the time of brain death, or soon after one’s death.

Organs should be removed from the body before stipulated time – before the rigor mortis (stiffening of the joints and muscles of a body a few hours after death) sets in to the body. It is important for the organs to be ‘alive’ while being removed and transplanted into another body.

“Organ donation must not be delayed,” says Jency, as organs may collapse any time within hours of brain death. Therefore it is must that the transplantation takes place as soon as possible.

Care should be taken while patients suffering from cancer, AIDS, hepatitis B and C, diabetes – type 1 want to donate their organs, as the organs might be already damaged or infected. In such cases, the removal of organ is decided based on specific tests. 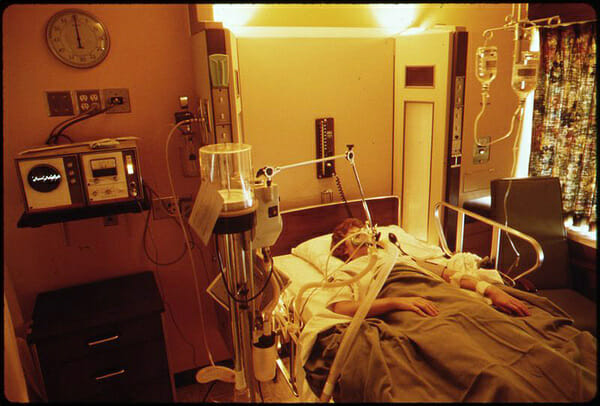 With organ donation, you become useful and immortal even in your death. Pic courtesy: Wikimedia Commons

What is the procedure to remove organs from the brain-dead

Organ transplantation can only happen at the time of brain-death, also called as cadaveric death. Before declaring a patient is brain-dead, a series of tests has to be completed by a panel of medical experts. The patient is kept on life supporting system till the test is carried out. This also helps keep the organs like heart, pancreas, kidney etc. alive while removing it.

Jency explains, “Life support system provides oxygen to the body, therefore the heart keeps pumping. But this creates a hindrance, as the families do not believe that their beloved is dead because they see the patient breathing. “According to the THO-1994, four licensed doctors are required to carry out these tests within 24 hours.”

A set of four tests – Cornea reflex test, Ear reflex test, Gag reflex test and Aphena reflex test – is conducted on the body twice, with a gap of six hours between each set, within 24 hours of the suspected brain death.

The medical experts who will do the test for brain death are recognised by the government and ZCCK monitors them. They include a Neuro-Surgeon / Neuro-Physician, Treating doctor, Specialist as approved by State Appropriate Authority, Medical Superintendent of the hospital.

Only when the test results indicate brain death, a certification of brain death is given.These tests will also provide information on which organs are fit to be donated and accordingly family is informed.

How do organs reach receivers?

At the same time, at least 10 recipients will be informed about the availability of the organ depending on the priority of the patient and blood groups. Blood group matching is the same as blood donation, where O group is the universal donor and AB is the universal receiver.

“In the rarest of the occasion organ is transplanted, across blood group,” says Jency. It is preferred to transplant the organ to the same blood group.

The recipients will be required to assemble at the blood bank (in Bangalore, ZCCK has associated with T T K blood bank, Indira Nagar) to assess Donor’s Specific Antibody test in order to match the most preferable body for the organ.

Once the body is declared brain-dead, the retrieval hospital arrives with its team to the place where the donor is on the ventilator system and retrieves the organ.

Tissue can be preserved for a few weeks while eyes, skin and bone can last a year. However, Bangalore doesn’t have transplanting or storing facility for skin, bone, ligament and nerves. Mumbai is the only city in India who carries out Skin and bone transplantation, says Jency.

What a receiver needs to do

The patient who needs organ transplant has to be admitted in any of the hospitals in Karnataka and register for the transplant in the prescribed form. There are different registration forms for different organs available online. Even the hospitals are supposed to will have the forms. In case of emergency, doctors can directly approach ZCCK for organ requirements and register the patient.

The donor bears no cost in all these procedures. The recipient will need to pay Rs.2,000 to ZCCK. Other hospital charges where the transplant takes place are separate.

No awareness, no donation

Cadaveric donation (donation of organ from a dead body) has considerably increased since 2007 in Karnataka. Over last seven years, only 58 people have successfully donated organs but 936 patients are still waiting for the donors who can save them.

In 2013, from January till August, there have been only 11 donations in Karnataka, though the number of brain deaths in the same period is much more.

Become a proud organ donor today, by registering with the concerned authority. Somebody else will live with the help of your donated organs, as a testimony to the spirit of philanthropy.

Namma Bengaluru Foundation is calling for citizens to send in nominations for the Namma Bengaluru Awards and celebrate exceptional individuals and organisations in the city.

Drop off e-waste at these Bangalore One centres

The bE initiative has setup e-Waste collection at Bangalore One centres in 10 wards so far. 3 tonnes of e-waste has been collected and 830 kgs of carbon emissions reduced!

On 30th November, in a run-up to World AIDS Day (1st December), city-based MBA students engaged the public in an awareness event on this dreaded syndrome.