Bengaluru has seen several cases of child sexual abuse in past month. Many parents and schools are apprehensive about coming out in the open, when a case of sexual abuse occurs. The social stigma, the pressure of interacting with police, not being sure about whom to contact etc are the issues generally faced. Above all, the very thought of the child having to re-live the incident during the investigation, is scary to many parents. This write-up is an attempt to explain how easy and child-friendly the law really is towards the child. 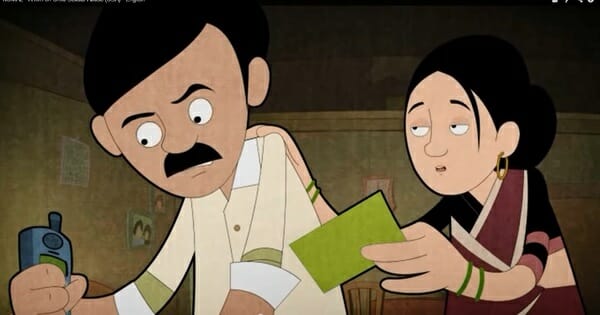 A still from ‘Komal,’ an educative film on by Childline on child sexual abuse.

A 2007 study on child abuse, by the Ministry of Women and Child Development threw up a shocking statistic – of a sample of about 12,500 children, 53.22% reported having faced one or more forms of sexual abuse. The Public Information Bureau, Government of India, estimates that over one-third of India’s population (around 42%), is comprised of children below the age of 18 years.

Understanding that child sexual abuse was a problem that needed to be addressed, the Ministry of Women and Child Development championed the introduction of a specific law to address this offence. The Protection of Children from Sexual Offences Act – 2012 (POCSO) received the President’s assent on June 19th 2012 and was notified in the Gazette of India on 20th June, 2012.

What is the POCSO Act?

Also read the Model Guidelines as prescribed under the POCSO Act, for use by professionals and experts handling a case of Child Sexual Abuse.

Medical examination of the child

Two kinds of examinations will be conducted at the hospital – one to collect evidence, and the other to document injuries, markings, bruisings, etc. If it is a recent event, it is imperative that the medical examination is conducted as early as possible, so that no evidence is lost while passing urine, motion or if its an oral assault by washing. The clothes that the child wore at the time of the incident must be handed over to the police, without being washed.

If the child is bought for a medical exam post 96 hours after the assault has occured, an exam to document any injuries, bruises, nature of injury, and possible causes by which the injuries might have been caused etc. will need to be carried out, even if samples and swabs are not collected,.

The hospital must then document this in the medico-legal records and report the incident to the police.

Under Section 19.1 of the POCSO Act, any person who has apprehension that an offence is likely to be committed or has knowledge that an offence has been committed, should bring the incident to the notice of the Special Juvenile Police Unit (SJPU) or the local police. The failure to report such an offence, is punishable with imprisonment of upto six months or fine or both. This penalty is, however, not applicable to a child less than 16 years of age. For easy reach, if one calls Childline on 1098, they will connect the concerned to the police and Child Welfare Committee.

If the case is reported by a child, it should be recorded in a language that the child can understand. If the child cannot understand the language, the police must appoint a translator or an interpreter.

What should the police or Special Juvenile Police Unit do?

Within 24 hours of the reporting of the case, the police must:

The police should also inform the child and his guardian about the following:

Department of Women and Child Development, Govt of Karnataka

What is the role of the Child Welfare Committee (CWC) under the POCSO Act?

If the police/SJPU report indicates that a child is in need of care and protection, the CWC should decide whether the child needs to be removed from the custody of his family and placed in a children’s home/shelter, within three days. The family and custodian of the child must be informed that such a process in underway. The CWC must also consider the preference of the child and the need for the child to remain with family (in case of age, disability etc).

The CWC can provide support to the child during the course of the investigative and trial. The support person can be an individual or organisation working in the field of child rights, or an official from the shelter where the child is placed or an individual employed by the District Child Protection Unit (DCPU).

Recording of the child’s statement by the police

If necessary, the assistance of a qualified interpreter or translator can be taken while recording the statement.

The police should ensure that the child does not come in contact with the accused. Additionally, the child must be protected from the media, unless directed by the Special Court, in the interest of the child.

If the police needs to record the statement of a disabled child, the assistance of a qualified special educator or a person familiar with the manner of communication of the child or an expert in that field, must be sought.

Recording of the child’s statement by the magistrate

Under Section 164 of the Code of Criminal Procedure (CrPC), a magistrate should record the statement of a child in the exact language spoken by the child. The statement must be recorded in the presence of the child’s parents or an other person of the child’s choice. The assistance of a qualified translator or interpreter can be taken and  as far as possible, the statement must be recorded by audiovisual means. The Magistrate should also ensure that the child and the parents or representative are given a copy of the police report on the matter.

While recording the statement of a disabled child, the assistance of a qualified special educator or a person familiar with the manner of communication of the child or an expert in that field, must be sought.

What is the Special Court supposed to take care of during the trial?

During the course of the trial, all questions that the Special Public Prosecutor or the counsel for the accused, have for the child should be communicated to the Special Court, who in turn will put the questions to the child.

The Special Court should ensure that the child is not exposed to the accused, and arrange for the accused to hear the child’s statement and communicate with his lawyer. This is typically done by recording the evidence through video-conferencing or by using single visibility mirrors or curtains.

While recording the evidence of a disabled child, the assistance of a qualified special educator or a person familiar with the manner of communication of the child or an expert in that field, can be sought.

Responsibilities of the Special Court

Under the POCSO Act, the Special Court must take the following measures at the time of the trial.

The Special Court is also in a position to order interim compensation to meet the relief and rehabilitation needs of the child, any time after the FIR is registered. This order can be passed based on an application by or on behalf of the child, or by the court itself. The compensation  that is awarded is payable by the State Government from the Victims Compensation Fund or other similar schemes that have been established for compensating victims under Section 357A of the  Code of Criminal Procedure and is payable within 30 days of the receipt of the order.

What is the role of the Commission for Protection of Child Rights?

The National and State Commission for Protection of Child Rights, as per the POCSO Act, needs to ensure the following:

Towards a safer future for the children of India

The POCSO Act has been formulated, so as to keep the best interests of the child in mind.

The Act allows different agencies of the State – the police, judiciary and child protection machinery –  to work together, in order to secure justice for the sexually abused child and begin the process of rebuilding the child’s life and future, by causing as little distress as possible to the child.

The Act also seeks to bring about a system that encourages victims of CSA, bring their offenders to task, as well as get assistance in overcoming their trauma.

Hopefully in time, the grievance redressal system that the Act facilitates, will play its part, in reducing the instance of child sexual abuse on India.

Author’s note: This article has been put together using content prepared by Centre for Child and the Law (CCL), a specialised research centre of the National Law School of India University (NLSIU), Bangalore. Thanks to Kushi Kushalappa, Head – Community Projects, Enfold India for her assistance in understanding the procedures stipulated under the POCSO Act as well.

A huge number of private security services are said to be functioning without a license, swamping the market.

Pedestrians of all ages and abilities are entitled to safe roads and footpaths. Children and adults in Bangalore reminded the government and the public about the need to ensure this at all times.

A citizens’ guide to using RTI

How does one file an Right to Information application? How can it help? If the power of the sunshine law is anything to go by, it’s time for more widespread use, especially in Bangalore, has come.