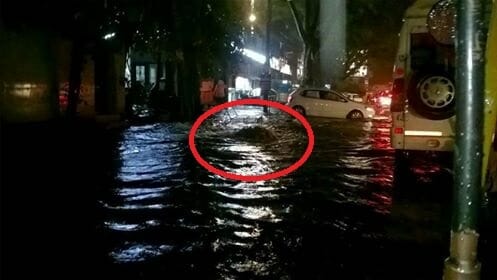 Water flooded through an open footpath near Shivananda Circle, during the rain that lashed the city in May 3rd week. Pic: Shree D N

The rain on May 14th claimed the lives of two due to a wall collapse in Johnson Market. The following week, heavy rains flooded several areas including three slum pockets in Bommanahalli. Roads in Hosakerehalli were flooded due to over flowing of storm water drain. All these events once again exposed the poor drain system in Bengaluru and how unprepared the city is, for the rains, like every year.

As expected, the BBMP’s control rooms were flooded with distress calls from citizens. And the Palike which had failed to take preventive measures, got into crisis management mode.

As we step into June and the monsoon only a few days away, the BBMP is yet to take measures to prevent any untoward event happening due to rains.

Major concern being the water clogged roads that leads to flood and traffic jams, the BBMP’s Storm Water Drain section which is responsible to desilt the SWDs, is yet to finish the desilting work.

Only 40% of desilting over

When this reporter spoke to Siddegowda, Chief Engineer of SWD, he said that 40 per cent of desilting work was completed, while the work on remaining portion was underway. “We have finished desilting 87 km so far and have removed 1.30 lakh cubic metres of silt,” he said.

When asked whether it wasn’t too late to desilt, considering that monsoon may enter any moment and pre-monsoon showers have already made the entry, he said: “the work is going on in full speed” and they are confident of completing the desilting work soon.

It is the responsibility of the ward-wise engineers to undertake desilting work in minor drains, says Palagappa, Joint Commissioner, West Zone. In his zone, he says the work on desilting small drains is completed and the desilting of larger drains is carried out by SWD section.

It could be recalled that in the last week of June 2016, the incessant rains caused severe damage near Madivala lake and Kodichikkanahalli and Bilekahalli area, in the form of flood. Boats were deployed to help people move out to safety. Following this, the State government decided to clear the storm water drain encroachments and 1,923 encroachments were identified in BBMP limits.

This apart, another task that the BBMP is expected to take into account before monsoon is, identifying weak trees and compound walls that are vulnerable to rain. According to an official, in a recent meeting BBMP Commissioner has vested all responsibility of rain-related issues to the zonal commissioners.

A long-pending demand to construct small bunds around weak trees to strengthen them has not materialised. Joint Commissioner (West) says tha the forest department has identified weak trees and has pruned/trimmed them, but not cut them or constructed bunds. “We cannot really predict which tree will fall. Even those trees that appear good and strong too sometimes tumble due to heavy wind,” he points.

The BBMP has set up 63 temporary control rooms, one in every sub-division. M R Venkatesh, Chief Engineer (BBMP) says that main control rooms are already available in each zonal office and one control room in the head office.

“We have provided men and materials to these control rooms and they will function from May 20th, 2017 to August 31st, 2017. Five to eight trained staff are deployed in each control room. Citizens call the control room to seek help or complain about flood, tree fall or any accident that has happened due to rain,” he said.

The BBMP has allocated a lakh per month to each control room and has mandated that the control room should have equipment like tractor, pumpset, pickaxe, axe, hammers and JCB if required.

The emergency helpline numbers are available on the BBMP website, but they are not in  an internet-friendly, usable format. We have tried to list most of them for you below.

The contact numbers of control rooms are also available here.

With some garbage disposal contracts cancelled (though the formalities are pending), BBMP is floating new tenders. 12 other tenders already approved have not been issued work orders due to the code of conduct.

While Bengaluru’s Mayor is seen as a powerless figurehead, it is time to change the narrative. We need to believe in the idea of an empowered and visionary mayor who can lead, like in the rest of the world.