Bengaluru is growing, but at a much faster pace than expected. With such rapid urbanization, peri-urban areas are concurrently growing faster beyond the planned rates of infrastructure development of local ecosystems. The random expansion of cities by dissolving or merging the boundaries of nearby cities, towns and villages in a disorganized manner without any foresight poses various social, economic and environmental risks.

In Bengaluru and its vicinity too, this has predictably led to an imbalance in terms of growth versus maintenance, witnessed by increasing slums, growing threat of newer and virulent epidemics, and poor access to basic services such as access to water, especially by the poorer and more marginalized groups.

Also, there is a lack of clear understanding of the dynamic changes in the expanding peri-urban areas in terms of livelihood, demography of the local area and the living conditions of the inhabitants.

A on-going study at CSTEP attempts to improve the understanding of such issues, by drawing contributions from climate science, health science and the water resource management of specific areas; it also seeks to examine the conclusions drawn through the experiences of community bodies in the different regions.

This study intends to estimate the present-day climate-resilient development strategies in the peri-urban regions of Bengaluru and Chennai in multiple phases, closely observing land-use patterns, economic development, water management, energy utilization, waste and water quality in a few places outside the two cities. Different research approaches were undertaken to accomplish this. 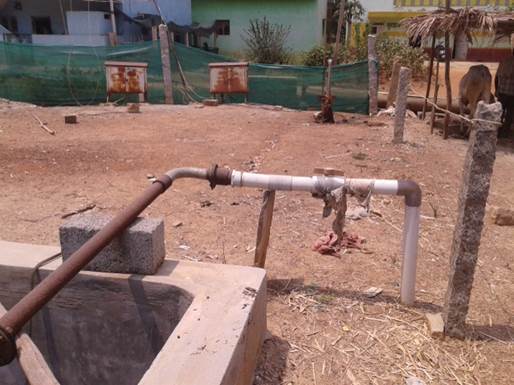 As a part of this study, researchers visited several villages in Doddaballapur taluk, in the vicinity of Bengaluru to interact with the local women. In the process, we spoke to the women about their livelihoods, water resources in the past and present, gender-related issues and concerns faced by minority groups. The interaction revealed much about their livelihoods, their day to-day social problems, sanitation, basic hygiene, gender issues and so on.

Through the process of focus group discussions, we were able to obtain detailed information about their lives and witness some notable coping mechanisms adopted by the local residents, for solving their own problems. These include conservation of water used for cultivation of crops, building their own household toilets for maintaining their personal as well as community hygiene, voicing their objections against alcoholism among the men of the village, supporting the education of girls, adapting to changes in water availability and searching for alternative strategies, cleaning of street drains to get rid of mosquitoes, street lighting, addressing transportation and conveyance  issues and so on.

A particularly interesting intervention was noted at Gowdahalli in the Dodda Tumakuru gram panchayat, about 33 kms from Bengaluru city where one of the households was using the grey water collected from the entire village for growing crops and farming in the kitchen garden.

Gowdahalli residents face water scarcity especially during summer and are dependent on rainfall for most of their agricultural activities. Many lakes which once provided water to the village have now dried up.

While we are not entirely sure why this is the case, studies by ATREE and others suggest that perhaps this is due to over-extraction of groundwater by farmers and others living upstream. The entire area lies in the sub-basin of the Arkavathy river, streams of which rise in the Nandi Hills area north of Bengaluru. Growth of eucalyptus trees and a reduction in the groundwater table may also have contributed to the water scarcity to some extent.

During our focus group discussions in Gowdahalli village, it was observed that the household mentioned above directs the wastewater, which mainly consists of kitchen water and bathroom washes without sewage and human excreta, from all the houses to a pit for collection where it is allowed to settle. The processes of sedimentation and biological degradation of solid waste follow, after which the less dense waste water is diverted to the fields through a network of pipes.

This process ensures sufficient water supply to the crops throughout the year and the family gets quite a good yield with much less effort and resources, unlike other households in the village which still suffer scarcity of water for even growing their kitchen garden.

Given the water crunch in the village, the process of reuse or re-purposing of grey water, is a significant coping mechanism and sets a good precedence in the region where such a practice has not been observed before (though it is not unique and has been followed in other parts of the state).

The same practice can, however, be made more efficient by using scientific methods for collection of the drainage water from all over the village and having it sedimented to the extent that it can be used for sanitation purposes, toileting, washing activities, etc. However, care has to be taken to prevent the breeding of mosquitoes at these sedimentation sites. Also, it would be important to ensure that the drainage water is collected through a secure pipe system, because leakage at any place would increase the risk of contamination.

Over time, efficient management could increase the number of beneficiaries from this practice. The Gram panchayat may take this up as a cleanliness activity or ‘Swacchata karyakram’ measure.

At a time of growing global concern on issues of water scarcity and depletion of the underground water table due to overuse of groundwater, it’s necessary for us to think of alternative and long-lasting solutions for meeting our water demands, of course in balance with the environment. The practice adopted by this one household near our city could pave the way for a simpler, sustainable solution to water scarcity by economising on water consumption for growing crops.

Of course, the use of advanced technological measures will help in improving the efficiency of the present mechanism and also create opportunities for scaling it up sustainably.

Dr. Parimala S is working as a Consultant at CSTEP, a not-for-profit think tank which works in varied sectors of Renewable Energy, Climate adaptation, Transportation, etc.

About Dr Parimala S 1 Article
The author has not yet added any personal or biographical info to her or his author profile.

Why Cauvery Stage IV water has reached Bangalore, but not your home

How much of water from the Cauvery Stage IV, Phase II is reaching citizens? Which areas are getting it? If your area is supposed to be covered and you are still not getting water, here’s why.

Though many lakes in Bangalore are dying a slow death, nothing much has been done concretely to stop the mindless encroachment. Kadugodi lake is the latest on the list.

Scarcity of water has touched new lows in Whitefield, but how is water supplied to certain communities alone in the locality? asks Sheeja Nair.