Absence of physical verification with the state Revenue Department data while registering the property and lack of timely survey and settlement of revenue land were the factors that initially led to storm water drain encroachments in Bengaluru. However, these flaws could have been identified and fixed subsequently, had the urban local bodies done their duty diligently. In the process, knowingly or unknowingly citizens purchased the properties encroaching upon drains and are now facing the music.

In the series so far:
Part 1: Why and how did stormwater drain encroachments take place in Bengaluru? And the concerns raised by citizens who lost their property.

Part 2: BBMP uses 50-year-old maps. The loopholes in the process of land survey and registration that contributed to the encroachment of government land in Bengaluru over the years.

The Bruhat Bengaluru Mahanagara Palike (BBMP) – which is on an encroachment clearance spree – is largely held responsible for the encroachment mess. Because, the urban local body, in this case the BBMP, is the custodian of the converted land and B Kharab (government land that cannot be regularised) properties, once the land conversion takes place at the Deputy Commissioner’s office. Soon after the property undergoes change of land use from agriculture to non-agriculture, the property falls under the jurisdiction of the ULB for issuing Khatas. 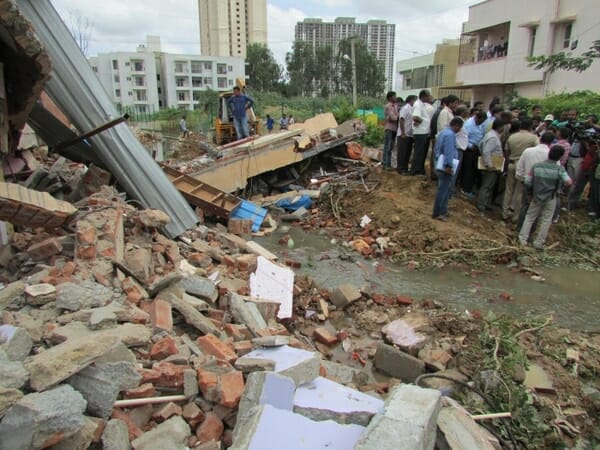 Houses in the area affected due to flood during torrential rains in the last week of July, were demolished in Kodichikkanahalli. Pic: Akshatha M

It is in this process of issuing Khatas that the BBMP stumbles. An ex-town planning officer of  the BBMP says once the Palike issues Khata to the title holder of a property, the town planning section does nothing to verify whether the property is on an encroached land.

“Khata issuing process is meant to be simpler as it only ascertains the property transaction between two individuals. The documents furnished to obtain Khata cannot really reflect if it is an encroached property. In fact, it is the duty of the BBMP to safeguard its properties (including B Kharab land, gomala land etc that are meant to be for public purpose) from private individuals, prior to issuing Khatas. Nothing can be done at the stage of issuing Khata or thereafter,” he says.

This is precisely why the residents who lost their property during BBMP’s demolition drive are puzzled. They have been questioning why BBMP that had issued them Khatas, is now demolishing the buildings.

An officer from the Revenue Department says a misconceived notion prevails among public that if the property is registered in sub registrar’s office it validates property ownership. But, in reality, registration does not give the rights to the property. The Sub-registrar’s job is to attest the sale deed and authenticate, which is not conclusive. Similarly, the Khata issued by the civic body too is not the ultimate ownership document. It is evidence of who owns and possesses the property, but not an irrefutable evidence, he says.

‘Not in the hands of town planning’

Apart from having the Khata document, some residents who lost their properties on drains, claim to have obtained building plan sanction from the local body. If at all their house was built on an encroached government land, why did the BBMP issue them the plan sanction at all, they ask.

“The BBMP’s Revenue Department does not take the opinion of town planning before issuing the Khata. They do not even carry out a proper field inspection during the process of preparing Khata. If at all the Revenue Department demands for a genuine revenue sketch of the property while issuing the Khata, encroachments can be detected. But flaws in the revenue sketch or even non-submission of revenue sketch, let the property owner to easily construct a house on an encroached drain. Town Planning section issues the plan sanction purely based on Khata documents which may not be genuine” he says.

That is, if the BBMP has already issued Khata to an encroached property, the town planning section will blindly give the plan approval, without cross-verification.

On the other hand, the BDA which gives plan approval for the layouts exceeding five acres, verifies sale deed, revenue sketch, mutation, Khata extract and other significant documents for sanctioning the layout plan approval. BDA Town Planning Member Aijaz Ahmed told Citizen Matters that the planning authority on its part, takes up field verification based on the Master Plan and survey number to identify whether the layout encroaches the government land.

“The BBMP approves a building plan merely based on Khata documents, due to which it is not possible to spot encroached property. But BDA can trace it before sanctioning the plan as we cross check the survey documents too,” he says.

Then where did BDA go wrong?

If that is the case, why are the BDA approved private layouts too have been listed among the buildings that have encroached storm water drains? Take the example of Ideal Homes Layout in Rajarajeshwari Nagar. The plush layout has been in the news ever since the BBMP decided to demolish it for encroaching upon SWD.

So how did the BDA give approval to layouts on storm water drains and on buffer zones? This question takes us to the defects in the process of preparing the master plan. The BDA prepared its first Comprehensive Development Plan in 1984 and the revised CDP was approved in 1994. Since then, the BDA has been revising the master plan once in 10 years.

BDA refers to the village maps and superimposes it with satellite maps while preparing the master plan map for the Bengaluru city. So, if the village map shows the stormwater drain passing through a survey number, the same should be reflected in the Revised Master Plan (RMP).

But, in reality, the SWDs which are shown in village maps are not necessarily found in RMP. “That could be because the BDA may not have taken enough care to refer to village maps and storm water drain maps while drafting the master plan. They may have just deviated the SWD slightly while superimposing it, deliberately or unwittingly,” the Revenue Department officer says.

While that is one possibility, the BDA Town Planning Member Aijaz Ahmed points out the technical reason behind why SWD shown in village map may not have reflected in the RMP. “We refer to village maps provided by the Revenue Department outside BBMP jurisdiction (in BMRDA area). But within BBMP, as the land is DC converted and the BBMP is its custodian, our reference point is the revenue maps provided by the city corporation. Khata documents cannot reflect the encroachment per se,” he says.

In simple terms, BDA says it is the BBMP’s Revenue Department which has provided wrong maps/documents and they have just done their work based on the inputs provided by BBMP.

Even as the authorities pass the buck, putting the blame on each other, the officer from the State Revenue Department says (let’s not forget how this department too has contributed to the mess!), the BDA should have verified village maps and Rajakaluve maps while drafting the master plan. “It would have made the master plan more accurate and citizens wanting to buy a property, could have easily identified whether the property is on a government land,” he says.

While the blame game is underway and the authorities are trying to shield themselves with the help of loopholes in the law, it is the common citizen who is paying a heavy price. All the officials and individuals this reporter spoke to while working on the series, had the same thing to say when asked about how can a citizen confirm if the land purchased has clean documents.

One suggestion that came from all of them is that the purchaser should compare all documents related to the property with the village map (which are now available online, thanks to demolition drive!) to ensure that it is not Kharab land and there is no road or nala passing through the property.

The state government released the wards reservation list for city council seats on 23 February. The last date for sending objections is 2 March 2010.

Often playing pro bono, with hardly anyone rooting for them, Karnataka’s women footballers are struggling. But their love of the game is the one thing that sustains them