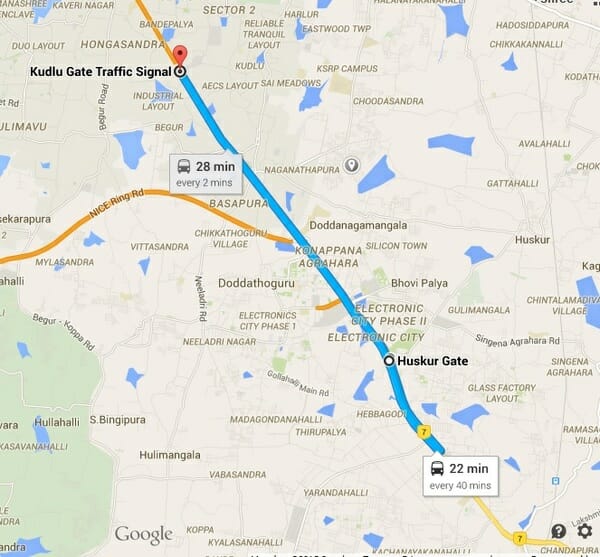 The highway extending from Kudlu gate to Huskur gate near Electronic City, saw the highest numbers of accidents resulting in spot deaths in Bengaluru over the last three years. Citizen Matters tried to understand why the accident rate was so high on Hosur Road and what was being done to improve the situation, and hit upon many interesting facts.

36 out of the 55 fatal accidents in 2014, have occurred on Hosur Road. The area falls under Electronic City Traffic Police limits. The fence between the service road and the main road on the 32-km stretch of this road from Electronic city to Madivala is just 3 to 4 feet tall. Pedestrians jumping the fence and crossing the main road have caused most accidents here, according to Traffic Inspector of Electronic City police station, Mohammad M A.

“It would be unfair to blame the drivers for these accidents. The vehicles travel way too fast here to be able to avoid an unexpected pedestrian in the middle of the road,” he says. However, with the pedestrian subways closing down at 8 pm, pedestrians tend to jump the medians, rather than going up to the crossings to cross over after 8 pm. The accident rate is higher during 8 pm to 11 pm, say the police sources.

Mohammad explains the urgent need to install a taller fence, which will open to the road only at pedestrian crossings. But the police are not allowed to take any such measures on this road, as it is a National Highway (NH). “After years of making repeated demands to the NH authorities, they have finally put up a 7-feet tall sample median fence for a stretch of 10 metres. It will be useful only if this fence is set up along the whole stretch,” he adds.

The 4-km stretch from Naganathapura to Kudlu gate, without a single speed-breaker or signal, is particularly dangerous. At Singasandra village, which is at midway through this stretch, local residents have to cross the road, amidst vehicles travelling at 120-130 kmph. “It is against NH rules to install speed-breakers on their roads. So neither will they do it, nor will they allow us to,” says Mohammad.

He adds, “Installing a signal in Singasandra can reduce the speed of the vehicles and allow people to cross the road safely.” According to him, the Traffic Police Department can sanction the funds for installation of this signal. This however needs a No Objection Certificate (NOC) from the NH authorities, which is hard to come by.

“Many inspectors before me have tried to procure NOC for over three years in vain. I have personally visited Surendra Kumar, Project Director, National Highways Authority of India Implementation Unit, Bengaluru, and explained the situation to him. We have given them letters. The local MLA has requested them. But it has been of no use. They have given us in writing that NOC will not be granted for this purpose,” explains Mohammad.

Surendra Kumar, when asked why the NOC was not granted, told Citizen Matters that they cannot “officially” grant NOC, for the very purpose of NH is to facilitate unobstructed flow of traffic.

“However we understand the situation. On Tumkur road, the traffic police have installed the signal without our permission and we have not raised any objections to it,” he said. “Though we cannot authorise the installation with an NOC, we will not object if Electronic City traffic police install a traffic signal at Singasandra,” Kumar assures.

Lack of lighting on the roads of Veerasandra is another major concern. A number of hit and run cases have occurred here. But due to insufficient light, the Closed Circuit cameras cannot capture the vehicle numbers clearly at night. The Traffic Police department has requested NH authorities to permit them to install a high-mast light in the junction. But the authorities have refused to give NOC for this as well.

None of the cameras on the Hosur road stretch from Attibele to Madivala are working, according to traffic police. It is the responsibility of National Highways Authority of India to fix the CCTVs on national highways. In December 2014, NH authorities wrote to the Electronic City Traffic Police that none of the cameras, installed by NH authorities, were working and that they would be fixed soon.

However, on requesting for the CCTV footage after a recent accident  on this stretch of road in March 2015, the traffic police were told that the cameras were still not working. The NHAI officials assured that they would be repaired by April 2015. Asked how many CCTVs are fixed on this stretch, Inspector Mohammad said that presently all the cameras have been removed for repair, leaving no CCTV on the flyover.

“Attibele to Madivala is a very long stretch”, Surendra Kumar said. “If we can get a list of the exact locations of these cameras, I will ask the concerned officials to attend to it immediately,” he assured, contrary to the police’s claims of non-cooperation.

Hit-and-run cases on the elevated flyover

Mohammad also says, “There is also no provision for us to regulate the traffic on the 9 km Electronic City elevated flyover. When the cameras don’t work under these circumstances, most accidents here turn out to be hit-and-run cases.”

“This has made it very difficult, in many cases impossible, for us to procure evidence to trace the culprits and hold them accountable”, he regrets.

On regulation of traffic on the elevated flyover, Surendra Kumar said, “We have no issues with police placing interceptors and penalising offenders on NH. The Airport Road is also under our jurisdiction and there are many interceptors there. Police can park their interceptors on NH, but only where additional space is been provided.”

With the National Highway Authority of India (NHAI) officials responding positively to the concerns of the traffic police, the ball is now in the court of the police, who can approach the NHAI and set the things right for Hosur Road.

This is the second part in a three-part series done by Citizen Matters on accident-related stories. The first part was about top-10 accident spots in Bengaluru. In the next part, read about the problems faced on NICE Road.

Tale of a backyard bird-rescue