Recently, in the midst of the furore over the Government of Karnataka’s ‘Steel Flyover’ announcement and the subsequent ‘BEDA’ protest that hogged headlines as well as social media space, the launch of a new railway station on Bengaluru’s map went quietly unnoticed. The brand new Hoodi Railway Station was inaugurated on September 29, 2016 by P C Mohan, Member of Parliament for Bengaluru Central Loksabha constituency, and MLA of Mahadevpura Arvind Limbavali and Sanjeev Agarwal, Deputy Regional Manager (DRM), South Western Railway. 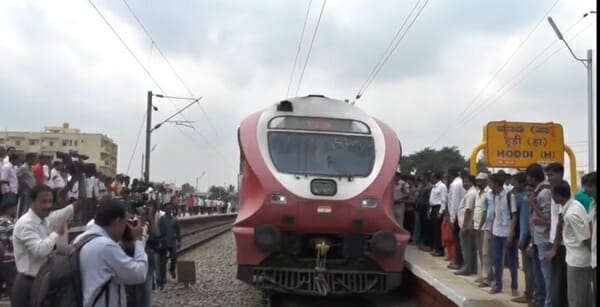 Hoodi is situated between K R Puram and Whitefield. It is home to Bengaluru’s IT Hub – Information Technology Park Limited, better known as ITPL. The station at Hoodi is the outcome of a campaign by dedicated citizens who live or work at ITPL, the Whitefield Rising group and many other unknown faces who have pressed hard for it since 2011. The credit for funding the station goes largely to P C Mohan, who heeded the needs and wishes of commuters and bore the cost of building the station using his MPLAD funds.

It’s a small station, but a major victory for all those daily commuters who chose public transport over their personal vehicles. They are a happy lot now with hassle free commute, free from hours of traffic congestion, pollution and dust. The station sports two raised platforms and a booking counter so that thousands of daily commuters who had, in earlier years, been getting on or alighting from the trains at great risk at this unofficial stop, can now sigh in relief. 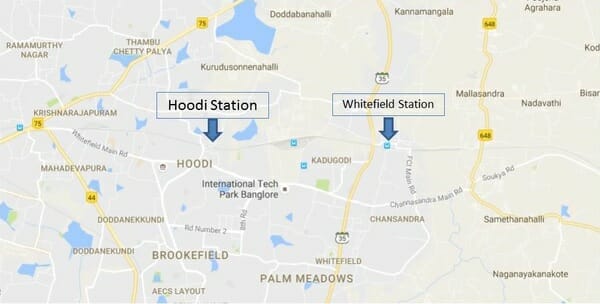 It is estimated that there are 2500-3000 people now using the Hoodi station every day. Though the frequency of trains through the station is not high enough yet, people are still using the long distance trains that do halt at Hoodi to escape the horrific traffic snarls on Bengaluru roads. At present, six pairs of trains, mostly passenger trains, stop at Hoodi throughout the day.

Mahesh Mahadevappa, a daily traveller from Kengeri to ITPL tells us that roughly 1000-1200 people take the trains daily from Bengaluru to Hoodi to reach ITPL and other nearby workplaces. Similarly, another 1200-1500 people travel from the Bangarpet side.

While the official stops at Hoodi station have eased the travails of regular commuters to and from ITPL to a large extent, a lot still needs to be done to improve last mile connectivity, say passengers. According to many of them, a BMTC circular bus service in these loops will help people to access the station en route their workplaces and encourage many more to switch from personal vehicles to public transport systems.

Hoodi station today stands as a justification of the call for sustainable alternative urban commute choices, something that many of us have been advocating since 2010 through our demands for a full-fledged ‘Suburban Rail’ service in Bengaluru. Though officially both the state and central government say they too support such a service, on the ground hardly anything has been done to kickstart its implementation.

Now, having seen the benefits of small interventions like Hoodi, one can easily gauge the potential of similar opportunities that exist. If other MPs from our city can emulate P C Mohan, a few more stations can be built catering to the busy areas near the Airport, Electronic City, the industries around ORR near Varthur Road/Chandapur and Manyata Tech Park.

Here is a list of new stations that could substantially ease the life of many a Bengaluru commuter:

As an eternal optimist, I can only hope that soon GOK and Railways will come together to meet Bengaluru city’s long pending demand for a Suburban Rail Service.

About Khader B Syed 9 Articles
Born in Bangalore, engineer by education and profession, Currently based in USA. Co-Founder, Praja - RAAG (Research, Analysis and Advocacy Group).
Website

18 people from Odisha, including three infants, were rescued from a brick kiln in Anekal. The rescued families were working as bonded labourers at the kiln.

Smoking out the cigarette

It’s more than a week since the imposing of the ban and all the ‘chimneys’ have been relocated from office balconies, roof-tops, walking areas around the building and parking lots.