A recent news report stated that the Karnataka government has notified amendments to some sections of the Karnataka Motor Vehicles Act. These amendments make way for a steep hike in the fines to be collected for incessant honking. The proposed fines are Rs. 1000 for the first offence and Rs. 2,000 for subsequent violations.

This is not the first such initiative. The Bangalore Traffic Police (BTP) launched the ‘No-honking Monday’ campaign long back. BTP had also roped in popular and respected faces of the city like Rahul Dravid to strengthen this campaign. BTP has engaged in this rhetoric of no-honking on social media as well. However, the effect of this initiative has, at best been only marginal.

Going one step further, the government has now decided to make the monetary costs prohibitive for the offenders. The government hopes that such prohibitive fines will make people refrain from altering horns, and silencers and dis-incentivise others from blaring horns every few metres on the road. Though a step in the right direction, this will not be able to achieve the objective of lowering sound levels on our roads for three reasons. 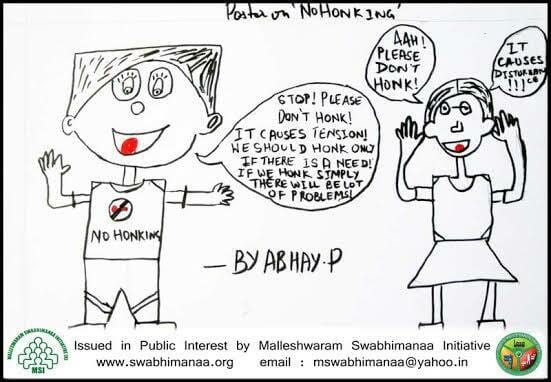 What is loud horn and incessant noise?

First, determining what is a ‘loud horn’ and what is ‘an incessant noise’ is inherently subjective. Many vehicle users deem it perfectly fit to honk repeatedly. Even a steep hike in fines will do nothing to change the predisposition of the average Indian driver, which is to use the horn as an object to reduce his/her on-road anxiety — much like an office desk stress ball.

The horn is imagined by many as a magic wand that can dissolve traffic away. To others, it is a musical instrument, to be played and enjoyed even when there are no obstructions in near vicinity. Increased fines along with effective enforcement may help reign in those who alter their horns or silencers, but it will do nothing to those vehicle users who consider the horn an appendage of their on-road personality.

Second, the success of this initiative is heavily dependent on the ability of the Bangalore traffic police to catch and fine the rule offenders. The BTP is already tasked with so many other duties that adding another task is sure to cause slip-ups on other ends.

Already, the Bangalore traffic officer is torn between the tasks of managing the traffic signal effectively for faster vehicular movement and preventing people from breaking traffic rules for better road safety. In such a scenario, expecting effective enforcement of the new rule seems to be wishful thinking. The objective of reducing the noise levels will still remain a few steps away.

Third, the basic law of economics states that a rational person makes a choice by comparing the costs and benefits associated with it. If the marginal benefits of picking an alternative exceed the marginal costs, that alternative is picked. It is relevant in the current context because the marginal costs currently are too low for the offenders to force them to give up the benefit experienced by pressing the easily accessible horn button. As outlined in the reasons above, raising monetary costs alone will not be able to help.

Raise the emotional cost of honking

What then, are the other ways that can help reduce honking? One way is to think beyond fines and instead increase the emotional costs for the offenders. This can be done, for example, by installation of horns that channel a portion of the sound they generate towards the vehicle users themselves.

Currently, the users are practically shielded from the noise pollution because the design is such that the sound is amplified and expelled outwards. If, on the other hand, if a blaring horn also causes discomfort to the user’s ears, it will make him/her think twice before launching a noise assault on other road users, particularly the unarmed pedestrians.

Though the design of such a system is simple and costs not high, it is natural that no vehicle maker will be interested in incorporating this for the fear of turning away possible customers. And this is where governments can step in. The Union government can create noise guidelines on the lines of the Bharat Stage emission standards. Such vehicular noise guidelines with broad specifications for horns that feed back to the user will help bring down noise levels.

Along with the existing initiatives, this step of increasing emotional costs can make our urban public spaces sane and peaceful. Ideally, a society that is more empathetic towards others will not need such government interventions. But until we reach that enlightened state, we need our governments and our people to collectively tackle this social evil of urban noise pollution.

In defence of honking
No Honking: Journey continues

About Pranay Kotasthane 2 Articles
The author has not yet added any personal or biographical info to her or his author profile.

With a powerful board and loose definitions, DNA Bill is a recipe for disaster

Centre for Internet and Society registers its dissent over new DNA Bill draft, and explains how it does not address the privacy concerns despite a seemingly powerful language.