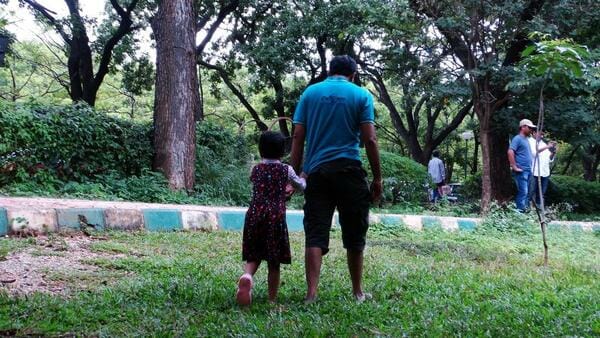 Cubbon Park is one of the last lung spaces left in the city, where one can find fresh air and green area. Pic: Shree D N

Disappearing lakes, chopped trees and encroachment of open spaces are the unfortunate reality of today’s Bengaluru. This means, in a few decades, Cubbon Park may well be among the last vestiges of greenery in the city.

However, given the frenetic pace of ‘development’ and the varying combinations of unethical nexuses that thrive in Bengaluru, who knows, one day, as Bimal Desai, who waged a 20-year legal war against the authorities to protect the park, says, “There will be one tree left and we will point at it to our grandchildren and say, ‘that’s Cubbon Park.’”

In 1836, Commissioner of the Mysore State, Mark Cubbon bought a little over 90 acres of land in what is today the heart of Bengaluru and built a residence for himself (the current Raj Bhavan).

Later, in 1868, about seven years after Mark Cubbon died en route to England, a 100-acre park was conceived and created around Cubbon’s residence. Slowly, this park was expanded in 1910, 1917 and 1930. By 1967, several other buildings had come up in what was by then popularly known as Cubbon Park, but it was still 192-acres wide.

Less than a decade later, in response to the arbitrary manner in which Cubbon Park and other green spaces in Bengaluru were being encroached upon, the Karnataka Government led by Indian National Congress’ Devraj Urs passed the Karnataka Parks Preservation Act in 1975, which protects the land and buildings withinparks, and prevents any form of renovation or extension without permission.

After the Parks Preservation Act was passed, a notification was issued in 1983, to include the Raj Bhavan, the Vidhan Soudha, the LRDE compound (part of the 17.5 acre compound is now the Indira Gandhi Musical Fountain park after the LRDE vacated the premises in 1960) and the Legislators’ Home in the area of the park, which expanded the park by a further 76 acres. Part of the idea of including these areas in the park was to “preserve open space around these important buildings.”

In 1998, the Save Cubbon Park Campaign was launched in response to the announcement by the then CM J H Patel, that the Legislators’ Home (LH), “already a very huge complex indeed; with luxurious suites for the legislators (from all over Karnataka) to live in when the Assemblies are in session,” was going to get an ‘Annexe’, essentially more luxurious homes for the legislators’ families.

“It was like a durbar and the Chief Minister is a maharaja where he says, ‘Okay, I am going to take away this piece of land,” says Leo Saldanha, Coordinator/Trustee of ESG India about the de-notification of the 44 acres of land at the time to construct the LH Annexe. Mr. Saldanha’s ESG India was one of the leaders of the many groups that were involved in the 1998 campaign.

As an article that appeared in Bengaluru Monthly in 1998 (no longer in circulation) said about the campaign, “the term ‘de-notification’ here, simply means that the government has arbitrarily decided that a section of Cubbon Park will no longer be a park.” What further irked the citizens was the fact that so sure were the legislators that Annexe would be allowed to stand, that construction had already begun before permissions were sought.

The 1998 Save Cubbon Park Campaign brought together a diverse group of people from women’s groups to animal welfare groups, and marginalised communities such the transgenders, who all came together to protest against the de-notification of the land for the Annexe.

The High Court itself is situated inside Cubbon Park and has also made its own demands for more space, such as for the construction of a parking lot. Although the Campaign lost the case in the High Court, they moved the Supreme Court which issued a stay against the construction.

Recently, in 2013, the legislators passed an Amendment of the Parks Preservation Act, ensuring that over 49 acres of land including the Vidhana Soudha and the Legislators’ Home was removed from the official park area. This means they can now use this land, however they see fit.

Act helps judicial activism, but not for long

The Act states that it is the duty of the Government to maintain the parks as horticultural gardens and take necessary action to improve the utility of parks. However, Cubbon Park seems to have been neglected and is in constant threat of encroachment. The vacuum of concern by relevant authorities has been filled by middle-class civic activism and activist judiciary—but both can only go so far without raising concerns of overzealousness. One of the cases that Bimal Desai fought and won in the high court in 1998, was the ban of political and public rallies (dharnas/protests) in the park, because of which huge amount of trash, including human faeces, would be left behind.

Over the last decade, with the relevant authorities not doing their jobs, it fell upon presiding High Court Judges, such as former Justice M F Saldanha and former Justice Vikramajit Sen, to issue directions and pull up the Horticultural Department for neglect that led to garbage dumping, felling of trees and other criminal activities in the park.

However In 2000, while acknowledging that Justice Saldanha had acted in public interest, the 56 interim orders issued by him, which included directions on Cubbon Park, were quashed as judicial overreach by a five-judge bench of the Karnataka High Court. 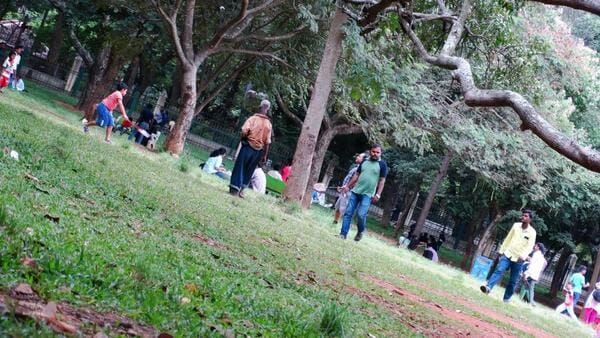 Parks are for all. Cubbon Park sees all kinds of people every day. Pic: Shree D N

When activisits champion their own causes

In recent years, the middle-class population in Bengaluru has grown, making it one of the most costly metros in the country. The rising number of middle-class walkers and joggers are in dire need of open spaces like Cubbon Park, as an alternative to malls and multiplexes.

The mainly middle-class Cubbon Park Walker’s Association, led by advocate S Umesh and others, has been waging several battles against the Horticulture Department. It was in response to a complaint filed by Advocate Umesh that the Upa Lokayukta ordered the Survey Department to identify the actual size of Cubbon Park, which officially stands at 192-acres today.

“After we launched a protest they (the authorities) agreed to close the gates at night. Over the years, including during the metro construction work, many trees were felled illegally. Today, it is impossible to find sandalwood or teak trees in the park,” says Umesh.

Some of members of the Walker’s Association, who do not wish to be identified, claimed that they had sourced corporate funding to construct toilets in the park and approached the Horticulture Department which refused to give them permission, the implication being that the Department was seeking bribes.

Umesh says that the Walker’s Association in the near future will approach the courts to pull up the government and ensure that the standards of the Cubbon Park remain high.

While middle class has taken over the activism part, the poor communities in the city are becoming increasingly invisible and largely ignored; private spaces like the malls do not cater to them. The lack of coordination among various local groups that bring in different perspectives such as social equity and environmental concerns, has firmly established middle-class civic activism with regards to Cubbon Park, which restricts its demands to areas that most concern the better-off.

‘Parks must be inclusive’

Among the many demands of the Walker’s Association is the construction of a compound wall that restricts entry of people, especially at night. However, as Leo Saldanha says, “Parks should be an inclusive space. Everybody should be able to enjoy it… It is the migrant worker who needs the space to rest his head in the night after a long day.”

Saldanha also speaks about previous attempts to charge entry fee to other parks in Bengaluru and discrimination of street children by guards at the entrance of Cubbon Park. “The rich and the middle-class can buy their way into a club… (restricting entry) means you’re forcing them (the poor) to sit in small houses… I grew up in a small house, so I know what it is like… where do you find ventilation? Where do you find the space? These are the basic requirements,” he says.

After much debate on setting up a Cubbon Park Management Authority for the Park, on 11th June of this year, Chief Minister Siddaramaiah approved a proposal to set up a body, which would have members from government departments, such as tourism and horticulture, as well as some representation from civil society and private institutions.

Meanwhile, various splintered vigilant groups watch over the park. What does the future of Cubbon Park look like? A privatised green space for those who can afford it? A patch of disappearing green? Or a real great ‘lung space’ for all?

About Aarthi Gunnupuri 1 Article
The author has not yet added any personal or biographical info to her or his author profile.

Sex workers have their own demands, but the government and the society are not sensitive towards them. They had to protest to draw the attention of the system.

There are constructions coming up on buffer zone of the lake. You can help by calling the BBMP officials and asking them to take action.

Here’s how we can work together, Potential MP Avare…

A Bellandur resident writes an open letter to his potential MP on how he should work with his constituents. The MP has to vote in parliament based on citizens’ opinions, involve them in decision-making, and give them governance data, says the author