“You can never control floods; yes can simply try to reduce the risk.”

The recent floods in Chennai have sent tremors among urban population. The question “what if this happens in my city” is on everyone’s mind.

Chennai was an example of extreme and abnormal rains which is very unlikely to occur frequently. Such occurrences can’t be prevented, however scientific analysis and timely action can limit the intensity and damage.

A Chennai-like rain is very unlikely in Bengaluru, as the clouds formed over oceans have to travel a long way to come over here, by which time the intensity of the rain would have diluted. Bengaluru, however, witnesses minor floods every rainy season owing to its rapid urbanisation.

The term ‘flood’ is very much relative. A particular quantity of precipitation (product of the condensation of atmospheric water vapour – snow, drizzle, rain, sleet, hail etc.) might be a common phenomenon in forest areas; the same might be a normal rain in villages, and it might be considered as ‘flood’ in an urban scenario.

Urban floods are far more devastating than other floods because of the higher population density and the huge amount of investment in the urban infrastructure. The urban flood frequency is also higher, because an average rainfall can cause floods. Some of the reasons for this are:

All reasons for urban flooding, except the intensity of rainfall, are attributed to urban development. India’s Silicon Valley has grown exponentially in last two to three decades, thanks to the rapid growth in the field of information technology.

The city, once known for its gardens and lakes, is now known for information technology and job opportunities. The rapid growth in the IT sectior in the city demanded rapid growth in housing, infrastructure, transportation etc. As housing and infrastructure were supplied with least care for planning, the city has grown totally unplanned. The growth patterns of the city will shed more light on the flood vulnerability too.

The Bruhat Bengaluru Mahanagara Palike (BBMP), the administrative body responsible for the civic and infrastructural assets of the city, was formed in 2007 by merging 100 wards of the erstwhile Bangalore Mahanagara Palike with seven City Municipal Councils (CMC) – Rajarajeshwari, Dasarahalli, Bommanahalli, Krishnarajapuram, Mahadevapura, Byatarayanapura and Yelahanka, one Town Municipal Council (Kengeri) and 111 villages around Bengaluru.

BBMP has now divided Bengaluru, spread over aerial extent of 741 sq. km., into 198 wards. The expansion of Bangalore City Corporation limits has grown over ten times in last sixty years.

Today, Bangalore houses many prestigious public sector companies, private companies and MNCs, making the city a hotspot for both, the younger and older generation, looking for job opportunities. As the job opportunities are available both in skilled and non-skilled areas, the inflow of the population into the city has been remarkably huge. The population, which was around, 1.63 lakhs in 1901 has grown to 84.17 by the year 2011 — a staggering increase of 5,099%.

The population growth of Bangalore city from 1901 to 2011 is given in the following table.

This exponential increase in the population of the city demands more and more urbanisation, including development of public utilities and infrastructure like roads, parks, transportation, sanitation, medical facilities etc. All these developmental activities need land resource, and thus the agricultural lands and the ecological features had to be sacrificed during the course of developing Bangalore city.

Percentage of increase of each urban sector

The bbove table represents the urbanisation Bengaluru has witnessed over the period between 1963 and 2011. Values for the year 2011 are the projected trend of land use based on the use of the city land as per the survey conducted by BDA in 2003. The actual land use may only go further up than proposed. The table shows the percentage of increase in each urban sector for the years specified.

It clearly demonstrates how the city has grown over fifty years. As there is continuous growth in the urban entities, there has been proportionate decrease in agricultural land and ecological features.

A map from BBMP representing the growth of Bengaluru city from a small town in 1537 to a metropolitan city in 2001 is shown below: 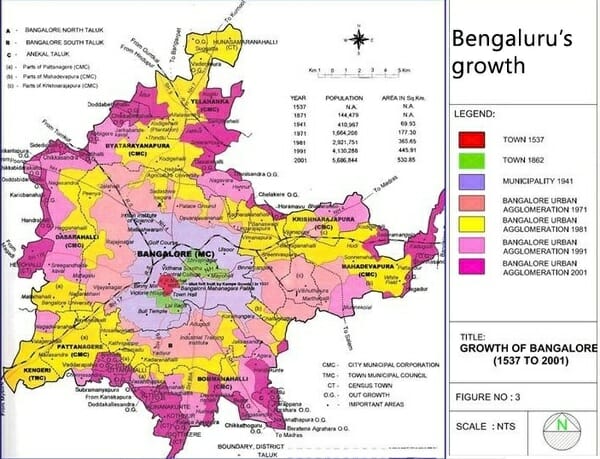 Though the city has been growing right from 1537, the growth in last few decades has been remarkable. Satellite Remote Sensing provides us a means to assess the urban sprawl using the historical images.

Landsat series is a series of satellites launched by NASA for remote sensing purpose. Landsat images for Bengaluru city hint a remarkable increase in the urbanisation. Below are the Landsat images of the city for the years 1972, 1992, 2002 and 2012. (Note: In satellite images vegetation is shown in red, water is depicted using dark blue and urban areas in greenish blue) 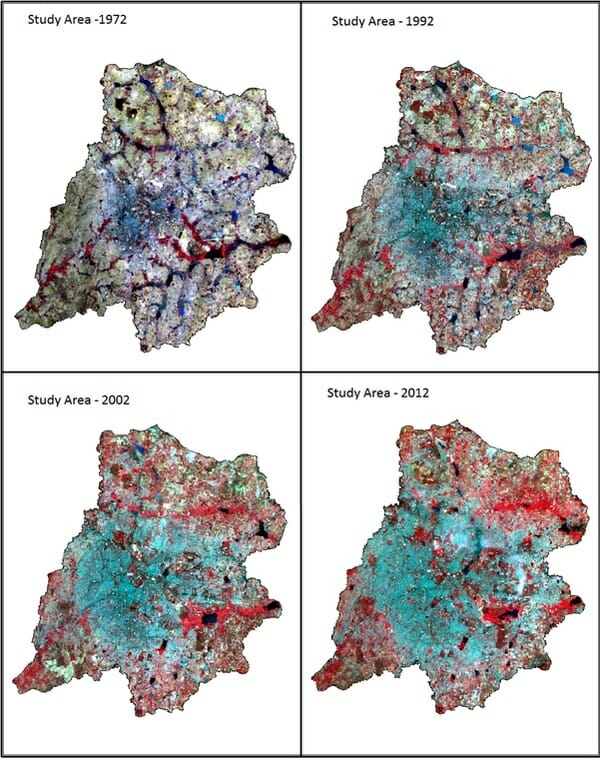 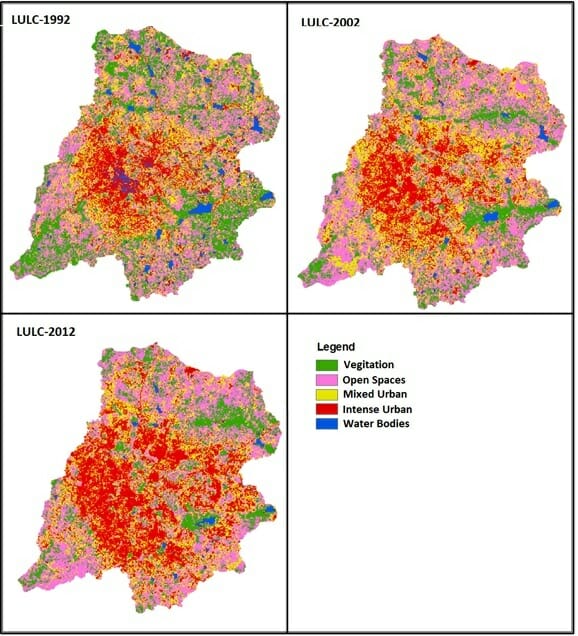 How does urbanisation increase floods?

When rainfall reaches the surface of the earth, some water gets evaporated, while some of it gets infiltrated into the soil. Some portion will be absorbed by plants and trees. If the rainfall intensity exceeds the capacity of water that can be absorbed or infiltrated this way, the excess water flows on the surface. This is known as surface runoff.

When urbanisation takes place, vegetation in that area is reduced, impermeable layer on the surface increases reducing the bare soil exposure; hence water infiltration gets reduced to a great extent. As the vegetation is less, the quantity of water being used by plants or trees is reduced. All this results in increased surface water runoff.

Water travels much faster over urban features like roads and other paved surfaces, than it does on the surface of an undeveloped area. With increased urbanisation, the runoff quantity and the speed increase. The urban drainage system would have been designed to take a particular load, but as years go by, the capacity of the drainages becomes insufficient to take the load of the increased runoff during the event of a heavy rainfall, which induces drainage overflow, resulting in floods.

Clogged rajakaluve floods homes near Bommanahalli
How Bengaluru is helping Chennai during floods
How is Bengaluru supposed to handle disasters like floods?
Why Bengaluru is not immune to floods: It’s all about land (and money)

About Dr Ajaya S Bharadwaja 5 Articles
The author has not yet added any personal or biographical info to her or his author profile.

How is wet waste processed at the KCDC?

A few days ago Citizen Matters had reported that the composting firm in the state, Karnataka Compost Development Corporation would be back in action, following the steps taken by the BBMP to solve garbage crisis. Here’s a peek at the composting process in the firm.

‘Dumping Saaku’ walk from Mandur to Bengaluru on Saturday

Until the landfill crisis peaked and erupted into major conflict this year, most Bangaloreans did not know where their garbage was doing. That has all changed now.

Demand high but schools not keen: The story of Right to Education in Bengaluru

The demand for quality education at low cost remains unmet in Bengaluru, while those who manage to get RTE seats for children face situations that are against the spirit of the Act. First part of the series on Right to Education act and ground realities in Bengaluru.