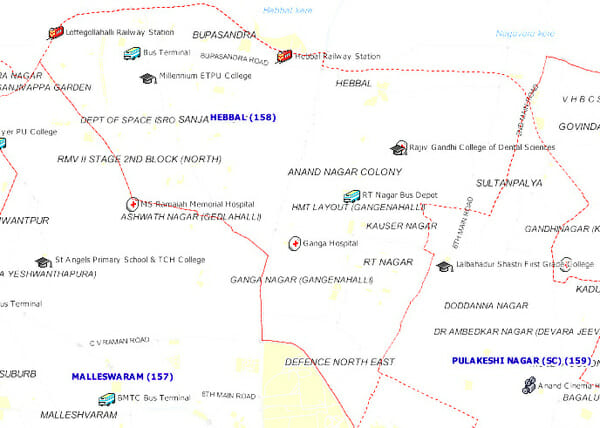 By-election for Hebbal Legislative Assembly Constituency is just a week’s away. The Chief Electoral Officer of Karnataka has announced the date for by-election to Hebbal and two other constituencies. The election for the three constituencies, Hebbal, Bidar and Devadurga, is scheduled for February 13th. The by-election in Hebbal is to fill up the vacant post that was created following the death of MLA Jagadish Kumar last November.

As many as 20 candidates are in the fray in the Hebbal constituency. During the last election, the BJP candidate had won the seat. As this by-election is seen as a matter of ‘prestige’ for the leading political parties, there was quite a bit of noise in the selection of candidates too. While the Congress has fielded party veteran C K Jaffer Sharief’s grandson Abdul Rahman Sharief to fight the election, the BJP has fielded sitting MLC Y A Narayanaswamy and JD(S) nominated Ismail Sharieff. Abdul Rahman Sharief had contested from Hebbal in the last assembly election too, but was defeated by the BJP candidate.

Here is a brief note about the candidates.

Rahman Sharief is the richest among all candidates. An active Facebook user during the last Assembly election, he had sought votes with claims of his grandfather’s contribution to politics and society.

Rahman Sharief has also made several promises to Hebbal voters, in his web page. Promises include annual citizen-based review of his performances, empowering the youth, solving water issues, making the constituency garbage-free etc.

Calendar of events for the election

Here is what the Hebbal voters should know before voting

What documents are allowed as ID proof?

Possession of EPIC alone will not guarantee you your vote, because it is mandatory that your name should appear in the electoral roll. For this, you have to check in the electoral roll whether your name is included or not. If your name is enrolled in the voters list, on the day of election, you should produce your identification document at the voting venue. Election Commission accepts following cards as ID and address proof:

How to check for name in the voters list?

You can search for your name in the voters list by logging on to the Election Commission of India website. You can search using your voter ID or name or relationship details which you had entered in Form-6 during the registration.

How to find polling booth details?

Who are your city councillors

Spot your ward here and identify your represenative in the city council. 112 seats were won by BJP, 64 by the Congress, 15 by the JD(S) and seven independent.

BANGALORE SOUTH » Report on debate between Bangalore South candidates, organised by Smart Vote and News9» Comparison chart of candidates at myneta.info Ananth Kumar – BJPFour terms as an MP. Served as a Union Minister