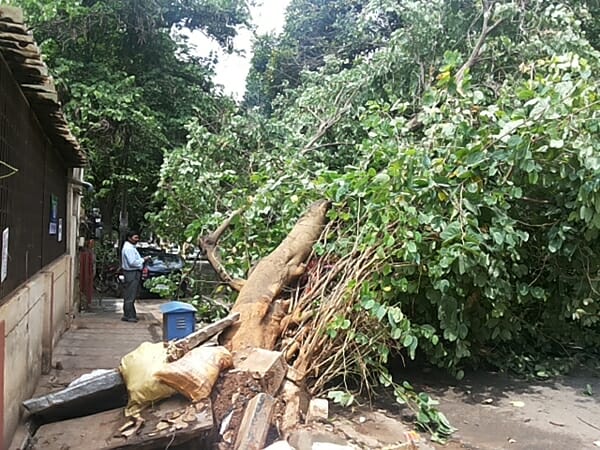 A tree uprooted in Malleshwaram 6th Main on 2 June, 2014. Tree Comittee will have to keep track of the trees planted and uprooted, and plan accordingly to protect green cover in the city. Pic: Shree D N

The Karnataka High Court directed Bruhat Bengaluru Mahanagara Palike to draw an action plan that will ensure accountability and maintenance of trees that BBMP claims to have planted since 2007 till 2011, and in future.

Following the HC’s order on 25th April 2014, a suo motu PIL was (WP No. 7288/2011) filed by former Justice D V Shylendra Kumar and WP no. 7107/2008 filed by Environment Support Group (ESG) on mass tree felling due to road widening in the City. BBMP officials, along with amicus curiae Vaishali Hegde and the petitioners Environment Support Group and CIVIC, formulated a structure of Tree Committee and submitted it to HC on Monday, 2 June, 2014.

The draft of the Tree Committee submitted by the two parties proposes two ground level committees and a co-ordinating committee.

The ground level committees will be headed by Assistant Conservator of Forest Officer (ACF) BBMP of North and South. This committee will also have representatives from the BBMP officials and the representatives of the petitioners.

The Co-ordinating Committee will be headed by the Chief Conservator of Forest, BBMP and will have amicus curiae,ACF, advocates from both the parties and the petitioners.

The bench compromising of Chief Justice D H Waghela and Justice H G Ramesh observed that the survival data of the trees submitted by BBMP doesn’t match the reality. Chief Justice stated, “Just constituting the committee will not lead anywhere. We need to see the results. General impression is that more trees are falling.”

Therefore the bench ordered BBMP that in the absence of survival data of the 8,50,000 trees planted since 2007-08 to 2010 -2011, the Tree Committee should chalk out a specific plan and target to ensure the survival of the trees that can be verified and accounted.

The jurisdiction of the Tree Committee will be limited to the areas under BBMP limit. The bench felt it is necessary to involve the local residents in the committee to ensure that the tree-planting doesn’t go in vain and doesn’t become a ritual to be performed and forgotten.

However, the court gave three week’s time to review the Tree Committee structure for any shortcomings in it and to include the recommendations made by the court today. The case was adjourned to June 18, 2014.

In 2008, BBMP had chalked out a plan to widen91 roads of 400 kms inside the city to help ease the burden of traffic. This project would have led to deforestation of many heritage trees across the city.

To stop this massive destruction of greenery in the city, in particular to stop the felling of trees at the Avenue road, the two NGOs, Environment Support Group and City’s Voluntary Initiative for the City (CIVIC) filed a Public Interest Litigation against these road widening projects.

The petitioners contested that the cutting of trees for this massive projects was illegal on the grounds that BBMP evaded the Public Consultation process that is mandated as per the Karnataka Town and Country Planning Act for any road widening project.

Along with this, petitioners cited that the draft of Comprehensive Development Plan -2005 (CDP) of Bangalore Development Authority did not show any plan to widen roads on such a large scale. However, it was noticed by the petitioners that in the final RMP-2015, innermost city roads were  planned to be widened without having consulted public on this regards.

However, High Court of Karnataka in WP No. 14104/2005 filed by ESG had directed Government to involve citizens in the matters of road widening. The PIL was then accepted.

Leo Saldanha, co-ordinator of ESG, said in his prayer that the none of the proposed projects have provided any evidences that their project will ease traffic problems. Further, referring to the experiences of highly populated cities from across the world, he stated that road widening is not the solution to chaos of traffic. He contended that solutions like intelligent design, responsive traffic management, enhancement of public transport, improvement in pedestrian zones, protection of livelihoods of vendors, and discouraging personalised modes of transport – can address the chaos in a metro city like Bangalore.

The PIL also mentioned that in an attempt to decongest the traffic in the city, the government fails to make space for street vendors, cyclists, pedestrians and senior citizens.

HC immediately responded to the PIL by setting up of a Review Committee compromising experts, on June 28, 2008. The function of the committee was to monitor the development projects like Metro, underpasses, road widening etc. As per the court order, the committee was supposed to take into consideration public opinion and pass orders accordingly.

The court directed the BBMP and other agencies to consult the the Review Committee for any infrastructure development project.

A N Yellappa Reddy, environmentalist and retired IAS officer and Justice K L Manjunath were the two who were supposed to head the committee, while S Shekhar, the BBMP’s Tree Officer, was appointed to be the convenor. The committee was supposed to have six experts to assist the committee. Both the parties of the PIL suggested three names each.

Leo Saldanha had accepted in the same press conference that no formal procedures were written on the paper for public to approach the newly formed Review Committee. In the press conference he had said, “I would presume the committee would be approachable by the public at large. In addition ESG and CIVIC as petitioners could collate issues and submit to the committee for consideration through its members.”

Concerns over working of the Review Committee

However, within five months of the formation of the review committee, there were concerns raised on the working of the newly formed Committee. To address these concerns, a meeting was scheduled by members of Hasiru and Usiru with the Chairman of the Committee, Yellappa Reddy, M R Suresh, BBMP’s Tree Officer, and S A Hubert, the then Deputy Conservator of Forests, on October 28, 2008.

Hasiru Usiru asked to induct the three members suggested by the petitioners into the Committee, while Saldanha alleged that the construction of Metro failed to adhere to the Town and Country Planning Act, 1961,which resulted in cutting of over 50 trees on KR Road, Race Course Road and Seshadri Road. Two MLAs, Hemachandra Sagar of Chickpet Constituency, and K J George of Sarvagnanagar Constituency, who had attended the meeting raised concern over Metro affecting Lalbagh.

The meeting ended with heated arguments, as Suresh Tree Officer, BBMP said that members of Hasiru Usiru cannot meet BBMP members anytime. Saldanha replied that all such meetings should be a matter of public record.

Again another meeting was held on October 31, 2008 attended by the same group of people where Leo Saldanha presented Hasiru Usiru’s analysis on the Bangalore’s traffic problem and pointed that cutting trees for roadwideing will not solve any road issue but it would “degrade the climate and microclimate of the city, and the removal of footpaths make the city unsafe for pedestrians, children, elders and the disabled; and also destroy the livelihood of several people.”

Sunil Dutt asked the officials to compile the legal provisions made by the respective government agencies like BBMP, BDA and the Town and Country Planning Act in order to form a policy that can be used to decongest roads in the city. But, unfortunately even this meeting ended up in argument and made no headway.

The petitioners questioned the Tree Officer’s act of giving permission to fell trees in one night. following which the court browsed through the Karnataka Preservation of Trees Act, 1976, on October 3, 2012. The HC bench comprising of former Chief Justice Vikramjit Sen and Justice B V Nagarathna in their order mentioned that the section 8 of the KPT act doesn’t have any provision for public consultation before removal of trees by an individual or on a large scale for widening of roads or construction of highways.

Therefore, the court felt it is necessary that the public should be informed about such removing of trees and accordingly public notice should be served inviting any objections.

The bench observed, “It seems to us that it may be futile and infructuous in those instances where the Tree Officer grants permission to fell a tree. Public perception is that such orders are executed almost instantly and at night. The Act does not seem to cater for such eventuality. Furthermore, so far as the constitution of the appellate body (The Appellate Authority of the Tree Authority) is concerned, it comprises of three members such as a Mayor or President of the Municipal Corporation, the Municipal Commissioner or Chief Executive etc., who are in effect the persons proposing the felling of a particular tree. This may amount to a person being a judge in his own cause, which is an anathema in law.”

In the next hearing held on November 20, 2012, the court ordered to reconstitute the Appellate  Authority within four weeks. It prohibited the inclusion of any BBMP member in the authority. However, the orders are yet to be met as it was informed to the court that the delay is due to “Provisions of Section 3 of the Karnataka Preservation of Trees Act, 1976. The amendments need to be carried out.”

Recently on April 21, 2014, BBMP counsel submitted to HC a compiled data with places and the number of the saplings planted in every neighbourhood across the city. The data claimed that, in 2007-2013, the forest wing planted 10,75,388 trees, out of which on an average 63.5% plants survived. The hearing was adjourned to 25th April 2014.

In the meanwhile, due to shortage of time and the the vast city to be covered, the petitioners, ESG sought help from the citizens through their website and volunteers of Hasiru Usiru to cross check the figured submitted by BBMP.

They instructed the citizens to measure the circumference of the tree which should be approximately 12 inches or less, at chest height — 4.5 ft from the ground.

The survey showed stunning results. On 25th April, ESG submitted to court their findings that found out, no saplings were planted in many areas where BBMP claimed to have planted hundreds of saplings, while the the survival rate of all was found out to be 20%  much lesser than what BBMP claimed -65%.

Following this, the court asked both the petitioners and the respondent to form Tree Committee for the preservation of the trees in the city. The court allowed inclusion of BBMP and Environment Support Group (ESG), the NGO to come up with names for the tree committee who will look into granting permission, conducting public consultation for uprooting any trees in the City. The committee can include members from the NGO, BBMP and various other experts.

HC orders notices to govt and developer over Bengaluru SEZ
BBMP to take tree felling management online
A handbook on trees, that is very useful for Bangalore
Whom should I complain to, when a tree is felled

While most workers in Karnataka now get minimum wages of Rs 11,557 per month, garment factory workers are still paid Rs 7000-8000. State government has not increased their wages as per the law, or even after a recent court order

Sarakki lake saw a host of demolitions when it got flooded a few years ago. Lake teams working for the rejuvenation of the lake have had an eventful journey along with the lake, which will see water entering into it in a few months.

The city budget will shortly be submitted to the new city council with a focus on infrastructure and some much-needed water.