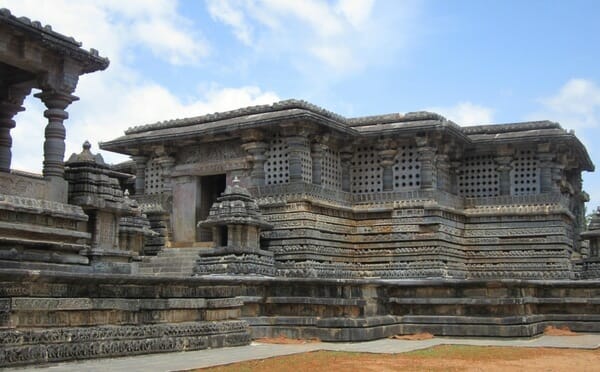 Do you enjoy travelling? Are you a history buff? Here’s a holiday that offers the best of both. A four-hour drive from Bengaluru on NH 48 will take you to Hassan. This district in Karnataka comes with its own bag of historical charms, waiting to be discovered. Pay a visit to the hamlets of Belur, Halebid and Shravanabelagola and take a step back in time.

Belur is home to one of South India’s most beautiful temple complexes, making it an ideal weekend getaway for history lovers. The cradle of the Hoysala Empire, the complex houses the Chennakeshava temple. It has a step well, which is commonly found in most Hindu temples. During the reign of the Vijayanagar Empire, a compound wall was built around this temple, and the entrance took the shape of a Rajagopuram, or the main entrance. 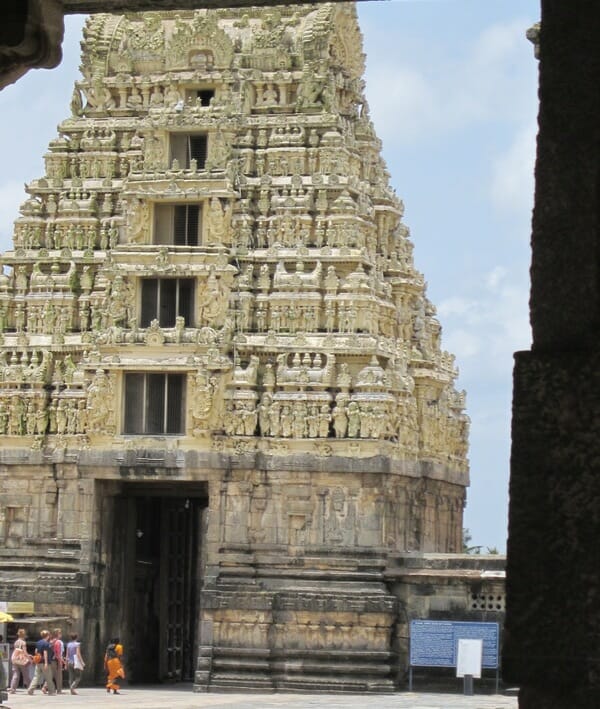 This temple is not only an example of the finest Hoysala architecture, but also showcases Dravidian architecture. The temple is said to have taken about a hundred years to build; considering the intricacy of every little carving, this does not come as a surprise. 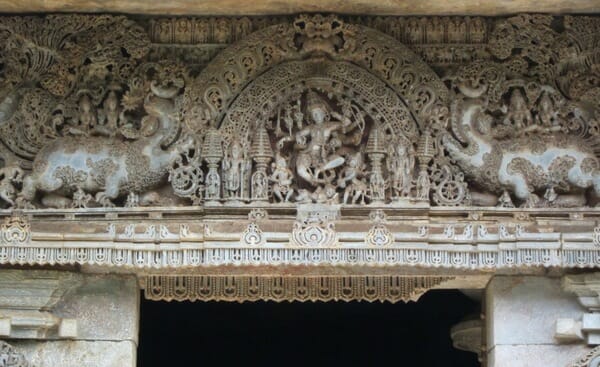 The sculpture at the entrance of the temple. Pic: Niveadha Nanjundeswaran

The outer walls of the temple, made of soapstone, are filled with magnificent stone carvings of endless lines of elephants, lions, and depiction of mythical tales. Even so, every carving on the wall is said to be unique. Since some shrines inside are still in use, the temple’s inner sanctum undergoes renovations often, and this has led to a loss of many of the original structures. The interior is said to have been more spacious and well-illuminated, but the added sculptures have now made the place a dimlit temple shrine. Nonetheless, it is breathtaking.

The Narasimha pillar inside the temple is said to be one of its kind. The pillar initially rotated with the help of tiny ball bearings. However, due to lack of maintenance, this cannot be witnessed anymore.

Interestingly, the artists who carved the pillar have left an empty space on the pillar. It was said to be a challenge to future sculptors to fill this space with a magnificent piece of art; but the space remains empty till date. 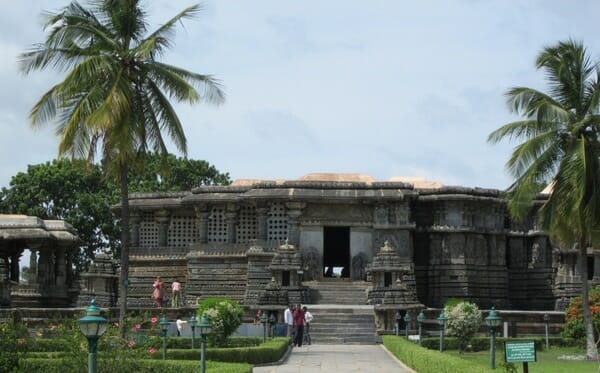 About 15 km from Belur is the Hoysala empire’s original capital, Halebid. The Hoysalas had to shift their capital from Halebid to Belur after a series of wars with the Khilji dynasty led to many of their structures being destroyed. The Kedareswara Temple is one of the most popular temples to visit in this region. Not far from it is the Hoysaleshwara Temple, which is home to a large Nandi statue carved from a monolith. Despite being built for over 86 years, this statue still remains unfinished.

Whilst admiring the beauty of the architecture in the temples, one cannot forget to visit the Jain Basadis at Basadi Halli. Of the hundreds that were in this area, only three remain today. Though they look simple on the outside, the ceilings of these temples are as intricately and uniquely carved as the other temples in the region. One of the basadis is home to a 15-feet statue of Shanti Natha, one of the theerthankaras.

Another interesting place in this region is the Yagachi Dam. The dam can be viewed from atop a bridge, and visitors are typically allowed entry into the premises. Built over the Yagachi river, this dam is picturesque.

The Yagachi Water Sports Centre is also close by. Visitors can choose to try their hand at jet skiing, or go on a ride on a banana-boat or speedboat. 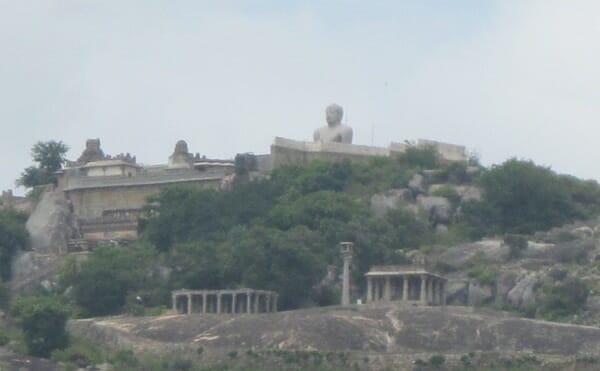 Enroute to the temples at Belur and Halebid, only a few hours away from Bengaluru, is Shravanabelagola. Pay a visit to the Bahubali temple on Vidyagiri Hill. The 58-feet-tall monolithic statue of Bahubali is centuries old, and is said to be one of the tallest monolithic statues in the world. It is also one of the most sacred places for Jains in South India. For those who cannot climb the 700-odd stairs that lead to the temple, there are palanquins which they can be carried up in.

Before entering the temple itself, is a viewpoint which provides a complete view of the town surrounding the hill. You can also find inscriptions in the earliest form of Kannada here.

How to get there

If you are going by road, it is best to go through Hassan, which is 180 km from Bengaluru. It should take you about four hours to reach Hassan by car. You could stop at Shravanabelagola enroute to Hassan (52 km from Hassan) or make a stop on the way back. Once in Hassan, it is easy to reach Belur, Halebid or, Yagachi (39 km, 32 km and 38 km respectively); they are in close proximity to each other.

There are several buses from Bengaluru to Hassan. You could also take one of the Sakleshpur buses that stop over at Hassan. The bus journey would cost you around Rs 350.

If you are looking to travel by train, the Kannur Express departs from Bengaluru at 8.30 pm on all days of the week, and arrives at Hassan at 1.30 am. Unless you are familiar with the area, or have arranged for someone to pick you up, the train might not be the best mode of travel, considering you will reach in the wee hours of the morning. Though Kannur Express is a regular, there are other trains too that travel to Hassan.

Once in Hassan, it is easy to hire a cab to take you around, rather than waiting for local buses.

Introducing four special Bengaluru 2010 calendars, jointly developed by Citizen Matters and Printo with select photographs of Bangalore, in aid of Kilikili! Pick up yours today, all for a cause.

Burnt to a cinder