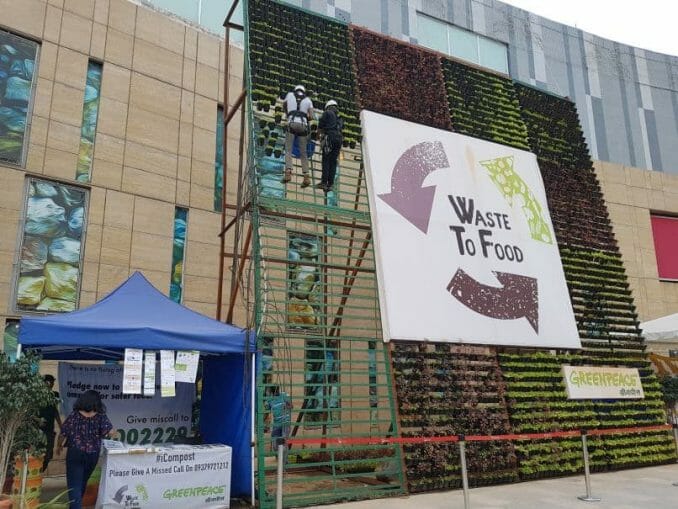 The campaign’s objective is to ensure that solid waste that the city produces is segregated, composted and sent to farmers to use as fertiliser. This can reduce dependence on agro-chemicals for farmers, improve soil health and also comes back as safer food for consumers.

As part of this campaign, Garden City 2.0, a vertical garden was installed in August. The garden hosted nearly 3,000 pots in which leafy vegetables like amaranthus, fenugreek and coriander were grown.

On Saturday October 21, the produce from the garden was harvested. The produce was used to make super tasty and healthy smoothies. JUSTBE, an organic cafe, prepared these super smoothies thereby completing the cycle of food-waste-food.

The Garden City 2.0 demonstrated that good-quality compost can be used to grow safe and chemical-free food. Latha Kuvar Rathod, corporator from Gandhinagar ward, said in a conversation with Greenpeace India, “I’m very happy to be part of this initiative. This is something that I’m personally pushing for. I want my ward to segregate and compost and this compost can be given to the farmers after a quality check.”

Shivani Shah, Senior Campaigner for Food for Life, Greenpeace India says, “Currently, we don’t have a policy to ensure that the household compost reaches the farmers for agricultural purpose. The campaign focuses on urban cities and how they can help the farmers to grow food which is agro-chemical free. The city has the potential to connect the loop by composting our wet waste, which can then act as a manure for the farmers, once necessary quality checks are ensured by the government.”

She adds, “Once the residents of the city segregate and compost wet waste, we will take this to the policy level with the help of relevant civic authorities so that a draft policy is made to ensure that good quality compost reaches the farmers.”

Some of the corporators who have pledged to segregate, compost wet waste and set up compost collecting centres at their wards are BN Nithish Purushotham from Ward 82 Garudacharpalya, SG Nagaraj from Ward 81 Vijnana Nagar, Nazima Khanam from Ward 139 KR Market, Latha Kuvar Rathod from Ward 94 Gandhi Nagar, and Poornima Srinivas from KR Puram ward, Sampath Kumar from Vasant Nagar (ward 93) and Mujahid Pasha from Sidhapura (Ward 144).

Greenpeace India will be getting in touch with more corporators to take the task forward by ensuring that their ward segregates waste and composts it on a larger scale to improve city’s environs and boost agriculture and horticulture both within the confines of the city and its neighbouring villages.

On October 28, the iconic Greenpeace ship ‘Rainbow Warrior’ is slated to dock in Mumbai. Savita Hiremath, a composting champion from Bengaluru, is going to facilitate a segregating and composting workshop to mark the Rainbow Warrior III’s maiden voyage to the country.

Note: This press note was sent by Preethi Ravi of Green Peace, and published here as part of our Message Forward section, meant for nonprofit public interest messages.

IISc report cites restriction of sewage inflow into lakes and expediting lake rejuvenation among steps to protect water bodies in Bengaluru. The report also includes findings from the study of water samples from Varthur lake.

What Bengaluru can do with 1800 crores

Attend this film festival that pays homage to the life and cinema of national award winning actor, the late Smita Patil. Nine of her films are being screened, including the Kannada movie, Anveshane.