Greenpeace India recently launched its Waste To Food campaign to create awareness about segregation of waste and composting of organic matter among the citizens of Bengaluru. With the population of nearly 10 million, Bengaluru produces between 3,000 tonnes to 5,000 tonnes of garbage every day of which around 60 percent is  organic waste.

To kickstart the campaign, activists from Greenpeace India placed placards with the message ‘Waste To Food’  at five locations across the city where unsegregated garbage is being dumped unceremoniously at public spaces. “The city deserves better, and the authorities need to pay immediate attention. While there are Karnataka High Court’s order and Solid Waste Management regulations for better solid waste management but there is a serious gap in implementation. The authorities need to step up their efforts and as citizens, we need to act with more responsibility. Dumping waste without segregation creates a vicious cycle, which comes back to us as unsafe food,” says Shivani Shah, Senior Food for Life Campaigner, Greenpeace India.

The vicious cycle, explains Shah, is simple to understand. By not segregating our garbage, we allow the biomass generated from various households go waste. This biodegradable waste can alternatively be used to produce compost for agricultural purposes. But in the absence of adequate availability of organic fertilisers and lack of awareness, farmers across the country depend on chemicals to make their soil “fertile”. 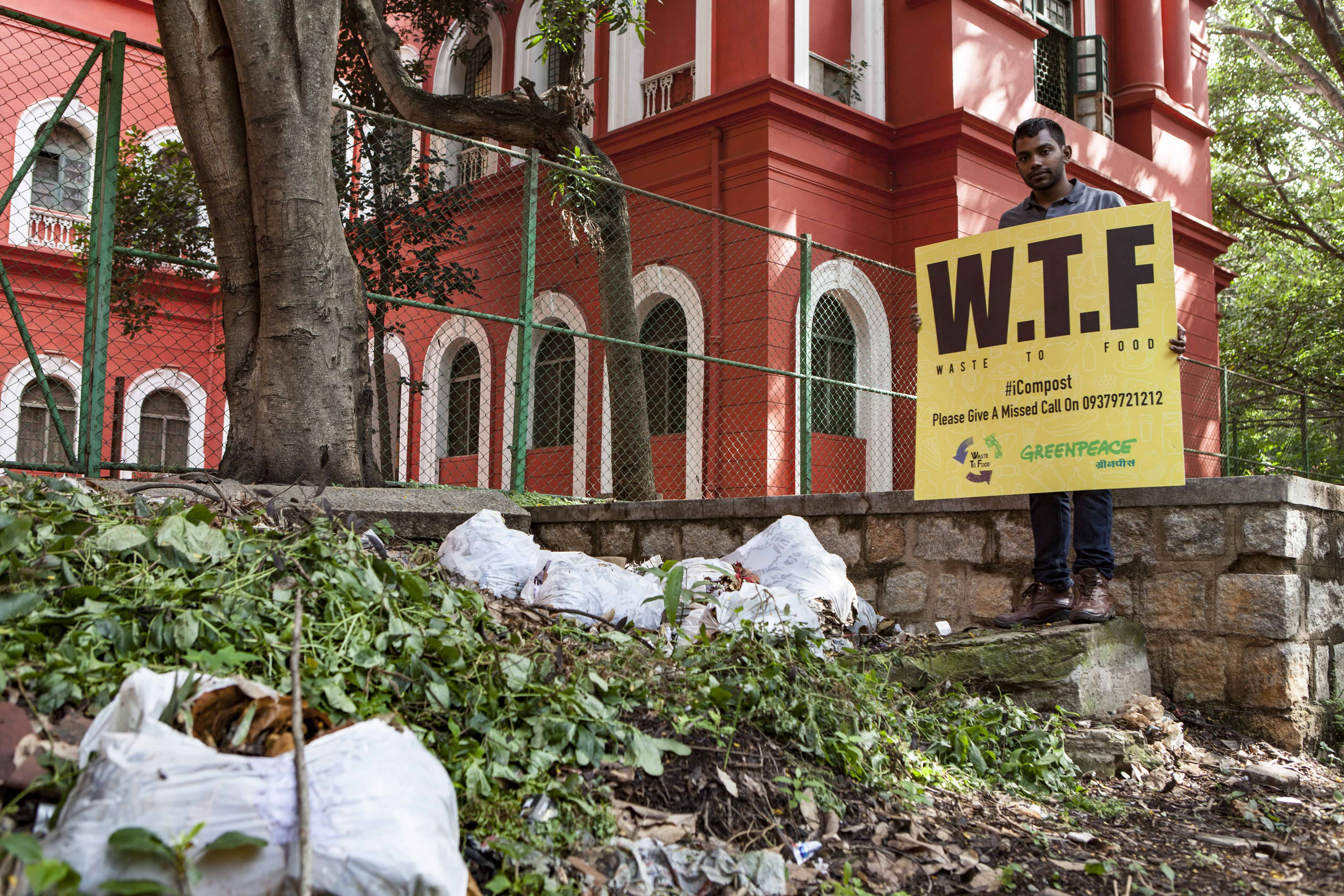 Deteriorating soil health, especially in farmlands that follow an intensive farming approach, is a major roadblock for farmers. In such a case, overuse of chemical fertilisers becomes the only way out for them. The chemicals enter the food chain and and this ultimately results in chemical-laden food on our plates.

“The long-term aim of our campaign is to convert our precious biodegradable waste into organic fertilisers and provide them to the farmers around the city. This will ultimately ensure that the food we consume is safer. By ensuring our waste is segregated and composted is the first step in this direction. This way the urban consumers can contribute in a significant way and be a part of the solution.” she added.

The Bruhat Bengaluru Mahanagara Palike (BBMP) claims that city segregates nearly 50 percent of the garbage it generates. “We still have a long way to go,” said Shah. “Composting will not only reduce the burden on landfills, good quality compost will also improve the soil health – if channelised. While giving us poison-free food, adding organic compost to soil improves its potential to sequester carbon – one of the best ways to fight climate change,” she added.

India produces around 62 million tonnes of garbage – of which 40% to 60% are organic and can be composted. Another 17% can be recycled!* Estimates show that this number that per capita waste generation per day is said to increase from 0.5gms currently to 0.74gms by the year 2041. “Cities across the country need to be prepared for this explosion in garbage – and landfills or incinerators are not the way forward,” said Shah.

BBMP seems to think that dogs don’t need company when they are with humans. If your dog is caught by BBMP, pay Re 1/- to get it freed. Here’s a sneak peek into the new bylaws to regulate pet dogs, that are likely to be approved.

New construction is restricted in Cubbon Park by law and court orders. But a recent High Court order has allowed construction of a seven-storey annexe building of the HC itself here, and that too, replacing a heritage structure

Residents of Subhashnagar in Singasandra area south of Bommanahalli are fighting to stop garbage from being dumped and burnt near the lake.