Priya Krishna, one of the youngest MLAs from the city, made waves for being the richest contestant. The Congress MLA who represents Govindarajnagar for the second time had declared moveable assets to the tune of Rs 815 crores and immovable assets upto Rs 95 crores. His father Krishnappa is the MLA from Vijayanagar. He has been a member of the Congress party since 2003 according his website.

He is also one of the most qualified candidates in the city with the education qualification of MA-LLB. He is a Golfer who represented Karnataka in the 2001 National Games held in Punjab.

Priya Krishna in the Assembly:

Priya Krishna in the news

October 29, 2014: MLA Priya Krishna was awarded the score of 3.82/10 in a DAKSH survey analysing legislators performances. He figured in the third last spot, with an extremely poor rating given by the residents of Govindaraj Nagar constituency.

June 20, 2016: He persuaded protesters at the Vijaynagar metro station to withdraw their agitation against the CM for not giving his father, M Krishnappa, a place in the revamped cabinet.

June 5, 2017: The MLA expressed support for the implementation of Project Vruksha, an online tree census initiative. He even offered to convince the BBMP to adopt this new technology that was successful in his constituency.

June 9, 2017: In an interview with Citizen Matters, the Congress leader said that he donates his salary entirely to the poor and needy.

February 27, 2018: Priya Krishna spent 107 percent of the MLA’s LAD scheme, contrary to an average of 85 to 90 percent spent by other MLAs. This showed him to be one of the generous legislators according to a survey released by B.PAC.

January 20, 2017: BJP MLC V Somanna was interested in joining the Congress again, but Housing Minister M Krishnappa, and his MLA son, refused to give their support to him.

April 25, 2017:  The hoardings of the father-son duo were allegedly vandalised by the supporters of the BJP corporator, Umesh Shetty.

July 23, 2017:  Congress workers began to squabble and cause trouble during the inauguration of the underpass on Magadi road. They shouted slogans praising MLA Priya Krishna after taking offense at the BJP Corporator’s forthcoming attitude on the stage.

January 22, 2018: Rumours said BJP was supposedly trying to field prominent leaders from the leading party in Karnataka, including the housing minister and his son.

January 23, 2018: He allegedly distributed helmets with ISI marks made mandatory by the traffic police to win over voters during an event organised by The Netaji Seva Sangha.

March 29, 2018: The Congress party breathed a sigh of relief when the BJP’s attempts to poach Vokkaliga leaders failed. Priya Krishna and his father chose to stay put in the Congress.

November 22, 2014: The Lokayukta had found the assets of the MLA and his father to be less than 31 percent of their declared assets. The investigation was conducted to verify accusations by activists saying the two politicians had 10,000 percent more wealth than disclosed.

February 20, 2015: He paid the highest court fees known till date in a defamation case of Rs 52 lakh. He was pursuing a lawsuit against a Kannada TV channel for Rs 100 crore as they had aired a program on alleged land encroachment by the leader.

November 17, 2016: The Muzrai Department complained to the special land-grabs court about the encroachment of 279 acres of their land by both, father and son.

June 11, 2017: A mysterious woman who is suspected to be mentally ill stormed into the DCP West’s office. She claimed to be M Krishnappa’s wife and the mother to his MLA son.

January 25, 2018: Opposition leader Jagadish Shettar urged the CBI to probe the irregularities amidst the tendering process of a housing scheme worth Rs 2500 crore. BJP leaders speculated that the scam came to light as a result of a rift between Congress leaders, RV Devaraj, Housing minister M Krishnappa and Priya Krishna.

How did Priya Krishna use his MLA funds?

Every year, an MLA is given Rs 2 crores, to spend on developmental works in his constituency. He should allocate the funds for government, community, law, order and health infrastructure.

Priya Krishna spent Rs 9.71 crore for the development of his constituency. The maximum expenditure seemed to be for drinking water, which drew an investment of Rs 2.7 crore. The cost indicated in 34 items in LAD data show expenses for drinking water unit buildings, ranging from Rs 3.5 lakh to Rs 12.5 lakh.

Other major spends include drainage work, which draws Rs 1.3 crore and education with Rs.1.44 crore.

The range for all the developmental work varies. For educational infrastructure, the grant of funds varies from Rs.5 lakh to Rs.14 lakh. Many items in the lists seem to be duplicated. For instance, one item, described as “Providing ornamental frill at Gundanna govt school in Ranganathapura in Ward Kaveripura-103.Stage-1” is repeated four times, but is mentioned as going through four stages. As Rs 2.5 lakh is given as grant during each stage, the entire project gets a grant of Rs 10 lakh, which seems rather exorbitant for ornamental work, but cannot be verified without seeing the project..

There are many items that are puzzling, with the way they are entered in the data. One row describes “providing steel railings grill steps at 12th C main 6th block Tajajinagar in Ward No.106” as requiring Rs 2.5 lakh, while the purpose or the theme of construction is not specified. One row says that one Gayatri got Rs 1.85 lakh, while Mr Umesh received Rs 81,000. The purpose for the allocation, though, is not clear. 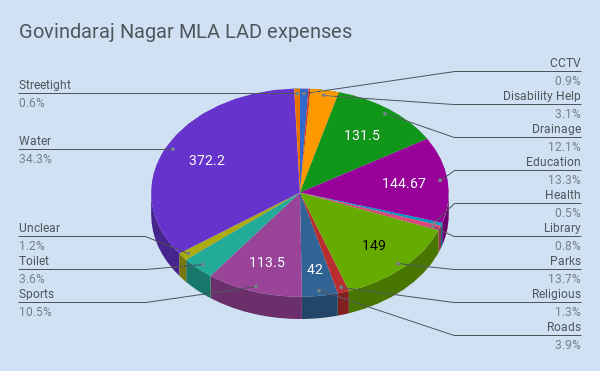 Iblur lake near HSR layout has been contaminated with sewage water from nearby apartments. Fish are dying because of this affecting the livelihoods of fishermen who use the lake.

As part of the civic awareness programme, students expressed their gratitude to Pourakarmikas. They in turn asked students to spread the message of not littering and garbage segregation.