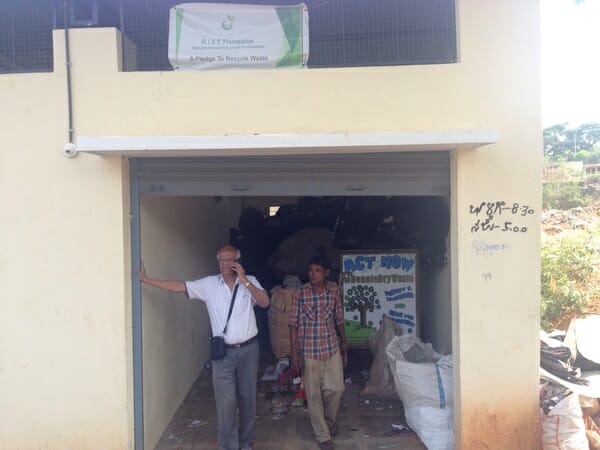 DWCC at RR Nagar managed by RISE Foundation is defunct now after some individuals forcefully closed its doors claiming ownership of the land. Pic: Veena Rajappa

Establishing this centre took a lot of hardships. After fighting several hurdles and suffering inordinate delays, the centre was finally established in a full-fledged manner. It became fully functional in January 2015. Unfortunately, within a year, the doors of RR Nagar DWCC have been shut down allegedly due to land mafia, impacting waste management system in the ward.

This dry waste collection centre established by BBMP and run by a local NGO RISE (Recycle Initiative for a Safe Environment) Foundation, was forcefully shut down by individuals who claimed ownership of the land. According to Veena Rajappa, who is a General Manager at Mindtree and works with RISE who used to look after the centre, last week a gang of men forcefully evicted the staff working at the centre and warned them not to be seen around again.

“Till date we all believed that the two acre land is CA (Civic Amenity) site. BBMP which owns the land, used a portion of it to build DWCC last year. After the completion of work, Palike handed over the responsibility of maintaining waste collection centre to our NGO. In March, some random people barged in and threatened us against using the land. They appeared from nowhere and began forcing us to vacate the property,” Veena alleges.

Narrating the ordeal, she says the goons turned up again in September and built a barricade around the centre. “By the end of September, they stopped the entry of vehicles carrying waste inside the centre. They ensured that no fresh waste entered the premises. They even deputed two women to keep a watch on us last month. In the first week of October once we finished segregating old waste, they locked the doors and threatened our staff not to enter the premises again,” she explains. 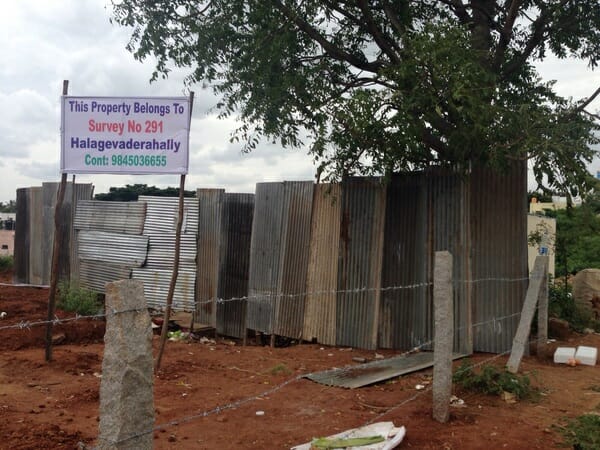 An individual who claimed the ownership of 2 acre land in which DWCC was functioning at DWCC, has displayed a board and put barricades. RISE Foundation which maintains DWCC removed the barricade last month. Pic: Veena Rajappa

No complaints booked by police

The well-established centre which used to get garbage from nearly 6,000 houses in the area has now remained defunct. A lot of effort was put to create awareness among people and BBMP civic workers to segregate waste and give it to the dry waste collection centre. For people who have worked hard for bringing in an ecosystem for better waste management, the sudden closure of the DWCC has come as a shocker.

“With DWCC remaining defunct, waste is all scattered around in our ward. You can see waste piled up by the roadside and burnt. Hasiru Dala (an NGO that provides waste management service to DWCCs) continues to collect waste from apartments in our ward and is temporarily diverting it to DWCC at Jayanagar. But, for how long can they continue it this way? This apart, individual houses are suffering badly due to the closure of DWCC. The waste collected from their houses is dumped on roads and vacant land,” Veena says.

She accuses the BBMP officials and elected representatives of not taking a call on the matter. District-in-Charge Minister, Mayor and BBMP officials are aware of the problem. Citizens have been complaining to BBMP about goons entering the premises, “but they did not take any action. We tried to file a police complaint as well, but were not allowed to since the land does not belong to the NGO, but to BBMP,” says Veena. “We do not know who are involved in this land mafia, but are certainly taken aback,” she adds.

When Citizen Matters contacted RR Nagar Joint Commissioner Veerabhadrappa B, he admitted to having been aware of the matter. “When BBMP was City Municipal Corporation, the government had sanctioned the two acre land for converting it into a layout. Since then, the land is with BBMP. We are surprised at how a private individual is claiming its ownership. The matter has been forwarded to Bengaluru Urban Deputy Commissioner. After verification of documents from both the parties, the DC office will decide its ownership,” he said.

He added that the office of the Joint Commissioner has filed a police complaint against the forceful eviction of property by goons and sought police security to the area.

New Apartment Associations often face issues — from electrical to sewage treatment. This event brings best practices on taking over from a builder.

Residents of an apartment complex in Bommanahalli off Hosur Road found out that they needed police protection to dig a borewell in their own compound.