Questions may naturally be raised over why this was not torn down by the BBMP when it initiated its drive against illegal advertisement hoardings in the city. But, in fact, it was. During one such drive, BBMP staff under the supervision of the Assistant Revenue Officer (ARO) of Koramangala had removed the advertisement display of the commercial hoarding in Adugodi recently. But in less than a week’s time of removing it, the display reappeared again on the same structure, mocking the civic officials who had removed it. 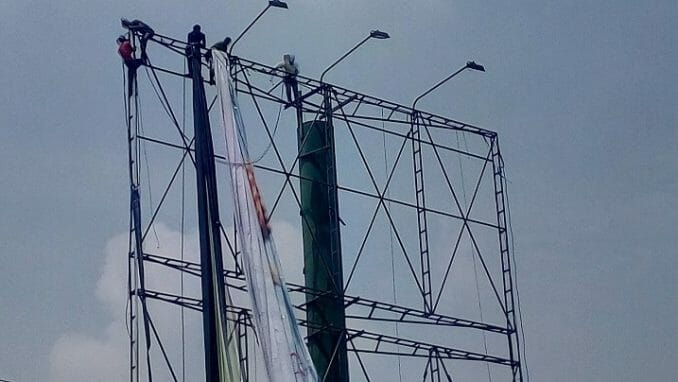 Something similar happened at Rajendra Nagar slum too. Koramangala ARO Srinivas says that in Rajendra Nagar, the advertiser had put up a new advertisement board within three days of the BBMP removing the previous display.

“I am appalled at their (advertisers’) behaviour. First, we issued them demand notices, directing them to pay the pending tax and penalty amount and then we removed the display. But in many cases, advertisers do not respond to the notices and even go to the extent of putting up the advertisement again, with scant respect for the law,” he says.

Unsure of how to handle such cases, Srinivas says he recently wrote to his higher officers seeking advice on how to pursue the cases where advertisers repeatedly violate the rules.

The situation is same in other revenue sub-divisions too. HSR Layout ARO Muniyappa says they have issued notices to 58 defaulters in his sub-division . “We remove the display after issuing notices. But the advertisements re-appear, not once or twice, but even the third time. Looks like they (the advertisers) just don’t care,” he says.

It has been over a month now since BBMP started issuing notices to the advertising agencies that display hoardings without obtaining required permission. According to C Nagaraj, Assistant Commissioner, Advertisement (BBMP), the city corporation has issued as many as 5,400 notices to the advertisers ever since the drive started.

“The last survey of advertisement hoardings indicated that the total number of illegal hoardings could be above 10,000. Of this, we have confirmed that 5,400 hoardings are indeed illegal. The remaining in the list need to be cross-verified because we aren’t sure if they fall under the category of hoardings,” he said.

The Assistant Commissioner admits that the advertisers reinstating hoardings within days of removing them has become a deterrent in the process. “BBMP will file criminal cases against the advertisers who repeatedly violate advertisement byelaw. We have, anyhow decided to file cases against all defaulters with the Bangalore Metropolitan Task Force (BMTF). The cases will be filed on priority basis against those who are reinstalling the hoarding,” he said.

As pointed out by C Nagaraj, 5,400 demand notices have already been issued to the defaulters. The advertiser is given one week’s time to respond to the notice and pay the tax arrears and penalty amount. If the advertiser fails to respond, the revenue officers have been directed to file a case with the BMTF. As many as 80 cases have been registered with the BMTF in the last two weeks, says the Assistant Commissioner.

Meanwhile, this time the BBMP has also filed caveats in civil courts to ensure that the advertisers do not easily get stay orders as soon as the notices are served. In the past, every time the BBMP made an attempt to book the advertisers, they would secure a stay from the court and continue the illegality.

BBMP’s former assistant commissioner K Mathai who had released a series of reports on the advertising scam in Palike, had in his first report detailed how the advertisers were using the court as an escape route. The report explained how the BBMP’s legal cell had failed to vacate the stay for several years.

“Advocates representing BBMP do not appear for any of the hearings which would help the advertiser to hold on to the stay order for 4-5 years. There are instances where the BBMP’s advocate has not appeared for hearings 30 odd times,” he had written, pointing fingers at the weaker legal cell of the BBMP.

However, all the AROs Citizen Matters spoke to said that this time they have filed caveat in various courts before issuing the notices to advertisers. Vijay Venkatesh, Yelahanka ARO said that they have listed 16 illegal hoardings in his sub-division. “We have filed caveat in all the cases. So far I have not received any response for the notices issued to them. But I have learnt that they are all moving the court,” he said.

Despite the BBMP taking precaution in the form of caveats, advertisers have succeeded in getting a stay order in 40 cases. The Assistant Commissioner says the BBMP is seeking the help of senior counsels to fight the cases. “We will do our best to ensure that the law violators are punished,” Nagaraj told Citizen Matters.

Treated water aplenty, not a drop for parks…

Even when parks are drying up slowly, there are few takers for treated water. Cost of transportation is said to be the major reason.