14-year-old Ruth goes to a school in DJ Halli, Bengaluru, every day—not to study—but to work, unlike most children. She has been doing so since January 2014. She leaves home at 7 am and walks for about half an hour to get to school. At school, she looks after children younger than herself—giving them food and water, taking them to the bathroom, washing their feet.

Once Ruth finishes her work at school, she once again walks and reaches home by 6.30 pm. At home too, she has several household chores to attend to. In any other family, these chores would probably be done by another family member. She has her dinner, which is typically a bowl of rice, watches some television and finally sleeps by 11 pm.

Most people will possibly look at Ruth’s plight as a form of child labour. However, this is Ruth’s choice; or it can also be looked at as an outcome of her circumstances, than a choice really.

Childhood with no dreams 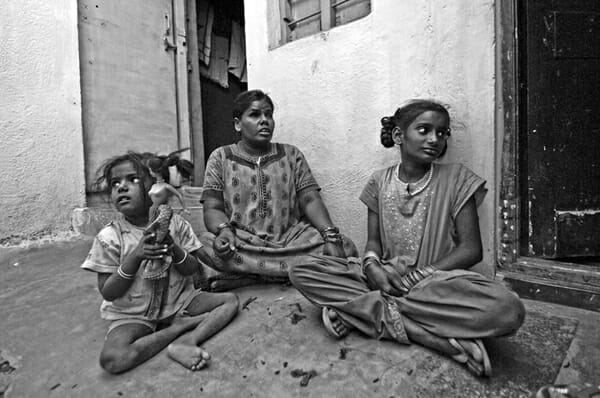 Ruth suffered a personal bereavement in July 2013. Her younger sister, Meghala, a child of six years, succumbed to malnutrition. The little girl weighed only 11.8 kg at the time—7.7 kg less than the average weight of a six-year-old Indian girl child. The child’s post mortem report pegged the cause of death as  pneumonia. The failure of the state machinery that is supposed to support families like theirs went largely unreported.

Ruth’s mother, Murugamma, a 35-year-old Tamilian woman, is blind. She was not born blind, but lost her sight following a bout of typhoid when she was 12-years-old.

Murugamma seems to have made peace with her condition. She quotes an old Tamil proverb, ‘Agathin azhagu mugathil theriyum,’ which literally translates to ‘The beauty of the soul is visible on a person’s face,” and says, “Most people judge others based on their face. I however, hear their voice. If the voice does not appeal to me, I don’t encourage them, I ask them to get out.”

Murugamma says that Ruth studied till class II at a local school. There were however several family issues that forced the family to pull Ruth out of school. With time, she lost interest in school, as she would have to attend a class where most of the students were several years younger than her. For some time, Ruth rolled agarbathis at home and earned about Rs 100 a day. After being told about the hazards (children below 12 years of age are susceptible to tuberculosis and bronchitis), Murugamma asked her to discontinue the work.

Murugamma talks of a time when life was not so pleasant for her family. She says, “I applied for pension at least 50 times, running from pillar to post, before I finally got it. The house was in a very bad state—there was a huge dump outside, it was always slushy, we wouldn’t have electricity and some days, we would have only one meal to eat. I used to have a hungry child on each lap and they would be crying along with me.” At the time, she says, she used to wonder why such a fate had befallen them. She then adds, “Compared to that, we are in a much better place now, I don’t cry as much. They came like gods and helped us.”

‘They’ here refers to Kaveri Indira, Gee Ameena Suleiman, Karthik Ranganathan, Siddharth Joshi and several other volunteers with Movement for Basic Rights, DJ Halli, who have been helping the family for several years now. When Meghala was in the hospital, the group extended financial support. Some members stayed at the hospital with the child so that Murugamma could check on Ruth from time to time. They even donated blood to her.

Murugamma adds, “The government did not do anything. They came and visited when my child passed away, that’s all. It was Kaveri and Gee who took us in, gave us money for Meghala’s medicines, stocked provisions in our house, and came to help if there was any problem.” Her gratitude for the people who stood by her and helped her is obvious when she speaks about them. “She looks after me like she would her own sister,” she says of Kaveri.

Murugamma and Ruth currently live in a house on 17th Main in DJ Halli, a slum near Tannery Road—the ‘house’ is actually more of a tin shed, but it is their home and they are happier than they were in the past.

Until Ruth started working at the school, the family’s only means of income was the disability pension of Rs 1,800 that Murugamma received each month. Ruth now brings in Rs 1,000 from her job at the school. Murugamma adds that Ruth’s money is kept aside, to meet expenses in the future. She says, “In a year or two, I will get something made for her. I plan to sell this house and buy a house in a better area.”

Ruth is given three meals at the school. She also eats dinner once she reaches home; certainly an improvement from the child who would cry from hunger, a year or two ago. Murugamma states that she has only tea and biscuit in the morning, and some rice for dinner; she has lost her appetite post Meghala’s death.

The family also receives 29 kilos of rice, 11 kilos of sugar, 6 kilos wheat and 1 litre of palm oil monthly, through the Antyodaya Anna Yojana (AAY) Card. The rice that they get from the depot however, does not agree with Ruth; consuming it gives her a stomach ache. So Murugamma buys rice that costs about Rs 50 per kilo for Ruth alone.

‘No marriage for Ruth till 21 years’

Murugamma believes that she has brought up Ruth to the best of her ability. She says, “The child looks as if she will mature very soon,” following which she staunchly states, “I will get her married only after she is 21-years-old. If she gets married at 18 (age of majority), she could have children soon after. At such a young age, her body will become weak from childbirth.” Many others in the community do not think like Murugamma. She talks of girls in her neighbourhood being married off at the age of 13, and having children by the time they are 14.

Murugamma’s face lights up each time she talks of Ruth. “She is a good girl,” she says before adding, “She is like the man of the house.” On asking her to elaborate further, she explains that Ruth leaves for work at 7 am and returns home only by 6.30 pm. Once she returns, she sweeps, swabs, washes vessels and fills up water. She then watches television for a while, before she sleeps. By this time, it is almost 11 pm. That is indeed a long, long day for a young girl, whose life would have been very different, had she been born under different circumstances.

‘Girls are better than boys’

“I don’t like boys,” Murugamma says, adding that boys typically run after some girl once they turn 21 and don’t look after the family. She has a different perspective towards girl children: “A girl however, will work hard and will bring home money. A girl child is always more grateful.”

She relentlessly talks about how her daughter Ruth cooks if necessary, gives her a massage, boils water for her bath and concludes, “I really like having a girl child. Even though we are poor, I have brought up my daughter with respect—and in return, I am treated respectfully.”

Murugamma concludes, “This is our story for now. If I have to tell you all about it, I will need two more days.”

One sitting Congress MLA, a BJP leader and council election hopeful, and a citizens group, all conducted campaigns in BTM Layout to collect relief materials and cash for flood-impacted people in North Karnataka.

Which school board for your child?

Many of Bangalore’s schools now offer national and international boards of education in addition to the state board, with innovation around the curricula. How do parents and students choose?

At the annual meet of Bangalore-based Children’s Movement for Civic Awareness, school students were educated on various civic-friendly initiatives.