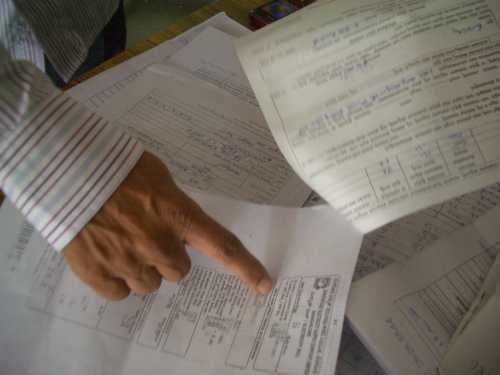 Ward offices say they don’t have the addresses of the voters, which poses a problem when there is a need to print the voter id card once again. File pic.

Being a responsible citizen who has not missed a voting opportunity in the last 20+ years, I was horrified to discover recently that my voter id was missing – did I leave it in the bank while opening an account six months ago, or was it in one of the photocopying shops, or was it at the mobile phone outlet…? I went back to all places where I had used or photocopied ID/address proofs but to no avail.

Finally I decided to explore the ways to get the card reissued. I was very happy when I found out that Bangalore One centres issue a print out of the card for a small charge. I called the nearest B1 centre at Jayanagar to know their exact location. I also enquired whether they issue print outs of voter ids. He responded  ‘houdhu…but logo (hologram!) illaa madam’. To a question on when they will get the logos, he said ‘gothillaa’ (I don’t know). He seemed to be thoroughly trained in saying ‘gothillaa’ which was his response to almost each of my subsequent questions.

‘We don’t have your address’

Having lost hope on Jayanagar B1, I decided to go to Banashankari. There was what I thought a ‘reasonable’ queue. I saw several people being turned back with a “get the ‘part number’ and  ‘serial number’ from your ward office” statement. Many of them had no clue of internet and/or how to find their details.  One person was also told “address doesn’t exist.”

The queue was held up due to people who wanted to get their spellings or the date of birth altered. The staff repeatedly refused and explained to them that they can’t edit the details but can only print. After standing in the slow-moving queue for about 50-55 minutes, I reached the counter with a clear print out of my electoral roll details – part number, serial number-everything.

Alas! The database that the B1 centre had just the door number and Bangalore, in my address. The staff said ‘please go to your ward office and ask them to send the details to us’. I showed her the print out of the electoral roll data which had my complete address. But she said “they have not sent it to us. Ask your ward office to send us the full data and then come here.”

As someone reasonably familiar with computers and databases, I thought these people would possibly have a ‘read-only’ access to the same electoral database but that was not to be. Even if I go to the ward office and ask, how will I know they have sent the details to B1?

Now who knows where the blessed ward office was. I called up many friends and found out that the ward office for Basavanagudi is at N R Colony.

I took an auto and travelled to N R Colony to see the office shutters being down (though not locked) at 12 noon! There were some women who had come looking for the ward office. Hearing our voices, someone came from the office to enquire what we wanted. There were four or five of us with different requirements relating to the voter id. There was even a grandmother with her daughter-in-law.

When enquired about the incomplete data, this gentleman said: “Once the voter ID is issued, we delete date of birth and address from the database as people keep asking for it again and again”.  (Getting it once is so tedious and I definitely do not understand why people will go ‘again and again’ especially when there is also a ‘charge’ for it!). Also, if one were to go by his logic, shouldn’t all the voters’ addresses be blank – how are they issuing print outs?

When pressed to know how to get the print out, he said, “You will have to submit Form 8.”  When I asked him to give me the form, I got the best response for the day: “You will have to go to Chennammanakere centre and see if they have the form. Banashankari centre will not have it. Anyway the last date is today and there is no use even if you submit it today.” By this time, I had become a little weary. Not knowing what Form 8 is and not being sure if it is available, I didn’t want to waste an auto trip.

However, as a last resort, I asked this person ‘how do I vote in this election without the card’. He said “there are 24 different ID proofs you can take and vote. Take any of them and you will be able to vote”. I am hoping this statement of his is right. I will now have to go back and check what are the possibilities to vote (I do not want to miss an election definitely).

The highlight was when we came out of the ward office, one of the people who had come there told  me: “Go to this (a specific) B1 centre and they will give you a print out for 100 rupees”. I asked her ‘how will they – won’t all of them use the same database’?  She said “I don’t know but you will at least save auto fare if you pay them 100/- and your work will be done!!” I have no clue what to make of such information.

As I walked back home, I was wondering how uneducated or less educated people handle such situations – if  people like me go through so much of hassle, what’s the plight of the poor people. May be they are more perseverant. But losing half a day’s earnings would be far more difficult for them. Isn’t it?

This experience brought back memories of  similar feelings (that I had) when  we  had to run around for almost three years to get the ‘legal heir’ certificate after my father passed away. Sadly he had no property in his name and we, his children, had no claims/qualms whatsoever. The only thing that was in my father’s name was the gas connection. So what if it was another state. Today I realised dealing with ‘government’ is the same everywhere!

About Rajeshwari B 1 Article
The author has not yet added any personal or biographical info to her or his author profile.

If you are one among the lakhs of voters of Byatarayanapura, this is what you need to know! Background information Understand the role of the MLA Learn all you can about the candidates: see below

The waste management firm working on the Redbull Flugtag event at Sankey Tank share that the garbage and litter at the venue were cleared up.