In spite of the new rules introduced by Bruhat Bangalore Mahanagara Palike (BBMP) to address the issue of Municipal Solid Waste (MSW), Bangalore continues to be plagued by the problem of uncollected waste in the neighbourhoods. The rules instruct the citizens to segregate waste, but they do not deal with the burgeoning quantities of solid waste generated.

More rich you are, more waste you produce!

A research carried out by the United Nations Environmental Programme (UNEP) in the field of behavioural economics has shown that the per capita generation of MSW is directly proportional to affluence and consumption patterns of society.

The prevalent system of disposal is predominantly dumping in around 60 known open landfill sites in the outskirts of the city. Only a minor portion (≈3.14%) is composted. Today, the pressure on the landfills – with acute shortages of land – is on the municipality and new avenues are being explored to deal with the city’s MSW in a more sustainable manner. 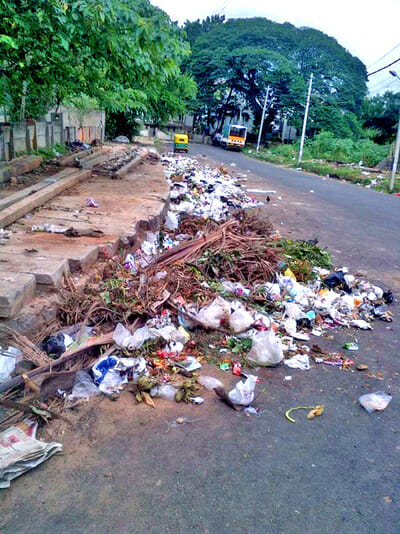 Waste in Bangalore is not fit to be incinerated. Gasification will work better.

Incineration – not suitable for Bangalore?

A common mistake made by entrepreneurs who want to explore business opportunities when it comes to MSW management is that they want to set up incineration plants similar to the ones in developed countries. The concept is to gather MSW from the municipality, burn it in a boiler, generate steam and electricity as final products.

The problem however, is that the characteristics of waste in India are different from the developed countries. Plastic and paper are the main drivers for combustion owing to their high calorific value and form a major portion of MSW in developed countries. However, in a developing country like India, plastic and paper do not contribute to more than 12% of MSW in any metropolitan or Class I city.

Moreover, rag pickers and scavengers scourge the MSW from entering the landfill sites and separating the recyclables i.e. plastic, paper, metals and glass. They sell their recovered items to recycling companies and depend on this source of livelihood for their existence. If incinerator plants utilise these items in the combustion process, it would render this section of society jobless. A technical factor which hinders combustion is the moisture content in the MSW of Indian cities. Humidity in most places leads to higher moisture content in the MSW.

Hence the high content of organic matter in the waste and the aforementioned characteristics of MSW in the country need biological processes such as pyrolysis, gasification, anaerobic digestion and composting to treat the waste.

Gasification is a process where MSW (feedstock) is heated in the presence of controlled quantities of oxygen and the biogas is generated due to the thermal breakdown of the organic matter. This biogas can then be used to generate electricity or as an energy carrier for other applications.

The Center for Science, Technology and Policy (CSTEP) has developed a gasification model using ASPEN (process modelling software) to treat the MSW. Gasification technology can be one of these options which can penetrate the MSW infrastructure in the Indian cities and towns.

CSTEP’s research shows that if all of Bangalore’s MSW (keeping paper and plastic aside for recycling) were to be gasified, potentially around 28 MW of electricity can be generated. The sludge that remains after the MSW is gasified can be used in composting plants or in the manufacturing of bio-plastics.

To be able to make waste to energy projects financially viable, the municipality needs to offer financial incentives to developers (to cover the latter’s risk) who relieve them of the responsibility to deal with a city’s MSW. In most successful cases across the world, this financial incentive is known as a “tipping fee” – a sum of money provided by the municipality to a developer per tonne of MSW handled.

This technology can be deployed in the context of Bangalore’s MSW. However, there are other factors which govern the complex socio-technical regime of MSW which hinders the implementation of such a project. The following points are suggested to improve the scenario:

PMC pays Concord Blue a tipping fee of around Rs. 300 per tonne. The cost of setting up the plant is around Rs 14-15 crore/MW, which will make the cost of electricity generated over the lifetime (LCOE) around Rs 13/kWh (taking into account a debt/equity ratio of 75:25 for a 10 MW plant). This is offset by actual price the electricity board pays, tipping fee and other incentives.

To conclude, following a systems engineering approach will allow such a transformation in the MSW infrastructure in Bangalore where the generation and calorific value of MSW is more as compared to Pune. The system has to be brought into being by aligning the objectives of the stakeholders, agreement of a suitable tipping fee between BBMP and a developer and establishing proper financial pathways and choosing a suitable site to set up the project.

About Saptak Ghosh 1 Article
The author has not yet added any personal or biographical info to her or his author profile.

Koramangala based Asha Niketan is a home for the mentally challenged. Structured as a family unit, the members share love, warmth and care.

7 stations in Whitefield that can be improved to ease traffic

Syed Awase Khirni, a GIS expert, points out seven areas where simple measures can ease the traffic around Whitefield area.

Commonly known as Madras eye, conjunctivitis is highly contagious. People often mistakenly assume that looking into the infected person’s eye spreads it. But it is the physical contact that is culprit.