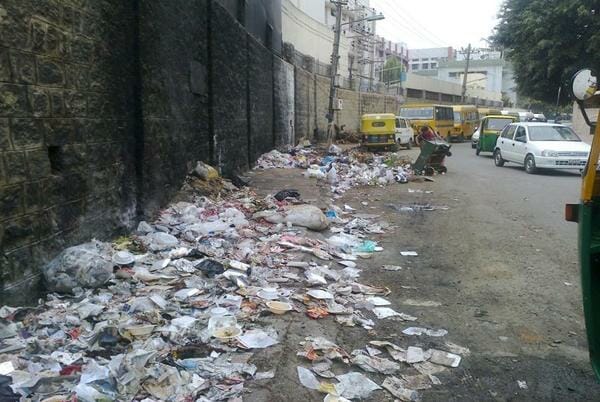 Garbage dumped on a streetside, due to the lack of secondary storage. Pic: Kathyayini Chamraj

I think Bengaluru was better off when it had garbage bins at the corner of roads. At least people would throw garbage in the bins. But now, all of Bengaluru is littered with garbage. In every area, there are two or three spots where garbage is thrown by people, on the road or in front of someone else’s home.

So why has the Swachh Bengaluru campaign failed?

I would blame the failure of the Swachh Bengaluru campaign on BBMP’s negligence.

Why the garbage crisis has no end
Mayor asks Bangaloreans to wait till January for better garbage management
Hundreds of crores spent on garbage, what does BBMP have to show?

About Anuradha 1 Article
The author has not yet added any personal or biographical info to her or his author profile.

Here’s a group that will help home buyers get right guidance on the legalities of home buying and inform them of their rights and duties of builders.

Bengaluru’s potholes cost lives and money, but here’s how you can hold BBMP accountable

In 2016, we had estimated that a pothole in Bengaluru costs Rs 1185 per day. Now, contractors and engineers can be held accountable for potholes, and you can ensure this happens

A green Ugadi is what the BBMP is aiming to achieve this time. This is the first time the BBMP is trying to address the problem of organic waste produced during festivals systematically.