It happens in every nook and corner of Bengaluru. Electronic City, Basavanagudi, Malleshwaram, Indiranagar. And your area too, possibly. This is the season of burning garbage in Bengaluru.

Last year we wrote about it. This year is no different as these photos prove. 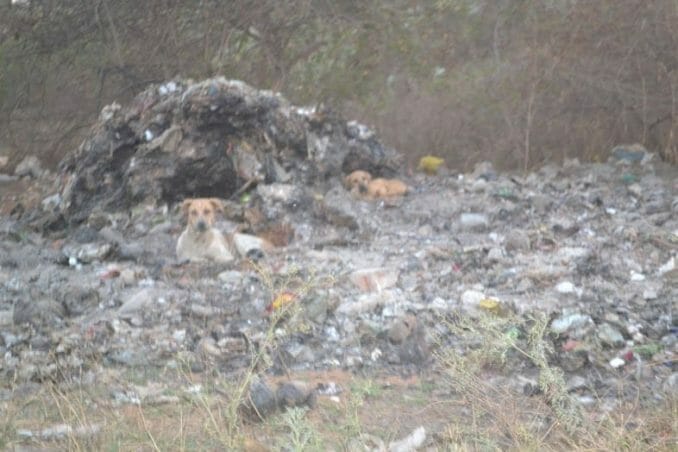 What’s different about garbage this season?

While trees profusely shed dry leaves this season, there are no local composting or disposal solutions for leaf litter. The BBMP contractors do not like to pick up dry leaves, as they add volume but not weight (Contractors are paid by weight). BBMP pourakarmikas burn leaves as they do not know what to do with them or they are instructed to do so by the contractors, corporators or health inspectors. To make it worse, civic workers leave thin plastic, paper, cloth or bedding while burning leaves, which results in the emission of harmful chemicals.

Bengaluru is a city that is perceived to have the most burning of garbage, out of all Indian metro cities. This was projected in a survey done by The Environment Research Institute (TERI) in 2013.

Burning garbage is not a new trend in Bangalore. An environment audit of municipal solid waste management done by Indian Institute of Science (IISc) in 2006 noticed the burning of garbage in all areas across Bengaluru, and suggested that it should be avoided.

The KSPCB data for January-February 2015 shows that particles in the air, or particulate matter as they are scientifically called, in the city exceed the limit of 100 μg/m3, and exceeds by upto 185% in some areas in the city. Central Silk Board, Victoria Hospital, Graphite India in Whitefield, AMCO Batteries on Mysore Road and others have high amount of particulate matter. Particulate matter comes from smoke from vehicles, dust and smoke, ash and soot from burning garbage.

What do experts say about burning garbage?

When polluted air is inhaled, a part of the particulate matter, or particles as they are commonly known, in the inhaled smoke actually reaches our lungs. Hair follicles in our nose can filter the particles only upto some extent. These particles can cause serious illness to people, especially children and elderly citizens. Medical Director of Rajiv Gandhi Institute of Chest diseases, Dr. Shashidhar Buggi, says that 85% of the airborne particles in the inhaled smoke that comes from burning leaves, reach the lungs.

Once the particles reach the lungs, they remain there for months to years. They cause physical, chemical and cellular changes in the lungs, leading to inflammation, causing increased mucus secretion, bronchospasm (tightening of the muscles around the bronchial tubes) and other effects, which cause cough, wheezing, and other respiratory infections.

Continuous exposure to the smoke emitted by burning leaves, for example, by those who sleep on the sidewalks near such fire, can be fatal or cause a permanent damage, because Carbon Monoxide is produced when the burning is improper. Burning 1,000 kilos of leaves will produce about 56 kilos of Carbon Monoxide. This, if inhaled, enters blood and affects the red blood cells, converting haemoglobin into carboxy-haemoglobin, which reduces its oxygen-carrying capacity.

“Burning of plastic will add to the carcinogenic effects… Dioxins and styrene gases are some of the most dangerous chemicals leading to lung cancer. This should be totally banned.”

Burning of plastic will add to carcinogenic effects. Dioxins and styrene gases are some of the most dangerous chemicals leading to lung cancer. This should be totally banned, says Dr Buggi.  “The most common hydrocarbons are benzo-pyrene and poly hydrocarbons,” he adds.

Inhaling any kind of smoke, be it from burning leaves, garbage, mosquito coils or camp fires, is injurious to all age groups. However, as children’s lungs are still developing and small in size, their vulnerability is particularly high, says a paediatrician from Malleshwaram, Dr. Kaushik.

“Also, unlike adults, it will not occur to children to move away from the smoke quickly or to cover their noses. This is another reason they are more vulnerable than other age groups,” he says.

Apart from short-term effects like running nose, continuous sneezing, dry skin, scaling of skin and itching, children are also at the risk of developing asthma. Constant exposure to smoke might lead to asthma in a child, and will be carried on to adulthood. A child raised in a highly polluted environment, with exposure to smoke for over ten years, has a much higher predisposal to lung cancer.

Burning piles of leaves, even after removing any plastic and paper from them, is dangerous. Smoke emitted from burning leaves, or from any biodegradable matter, has carbon particles. “But when plastic is mixed, it is not only carbon that is emitted, but also sulphur and lead, both of which are very strong carcinogens,” says Dr Kaushik. However, carcinogenic content in smoke emitted from burning only leaves, is less compared to burning the mixed pile that contains plastic and paper along with leaves, he adds.

85% of the particles that come from burning leaves reach lungs, and remain there for months. The rest 15% is prevented by the hair follicles in the nose.

How to minimise the effect?

As a preventive measure, Dr Buggi suggests covering the nose with handkerchief or with three-layered mask to prevent inhaling these particles.

Regular breathing exercises – Yoga and Pranayama – and nutritional diet will help in controlling the effects to some extent. Dr Buggi says that permanent solution, however, would be a healthy environment. Proper scientific management of domestic waste, encouraging composting of dry waste and simple scientific innovation in waste management can go a long way, says Dr Buggi.

What if you are away when UID visits you?

UID officials say that those who are not home when their staff come visiting need not worry. The scheme is to be launched for Bangalore next month, after Mysore and Tumkur.