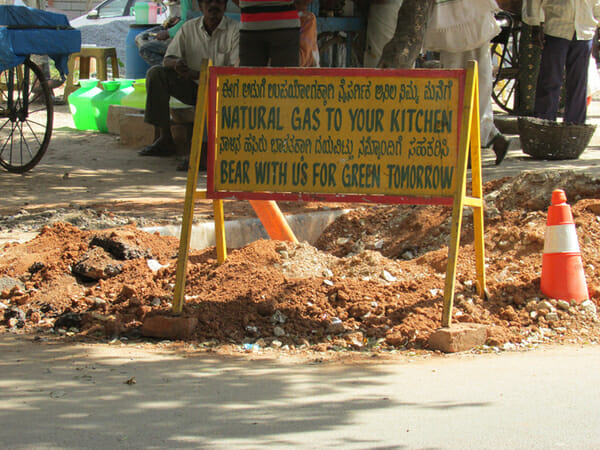 Within months of the GAIL Gas Ltd initiating work on its ambitious City Gas Distribution Project in Bengaluru, it has attracted the wrath of residents of HSR Layout. A few days ago one of our readers had written about how HSR Sector 7 residents are caught between GAIL and BBMP. The author had complained against the contractors for doing a shoddy job and not restoring the trenches properly.

Now it is the turn of HSR Sector 2 residents. HSR Layout is the second location in Bengaluru city, after BEL Colony where the GAIL Gas Ltd is laying the pipeline for CGD. Residents’ Welfare Association of Sector 2 has raised some serious concern over the kind of work that the contractors hired by GAIL are doing. They accuse the GAIL of carrying out the work by violating BBMP norms.

The violation first began in June, when the GAIL contractors started pipeline work in HSR Layout even before obtaining permission from BBMP. The city corporation issued permission to lay pipeline for the first set of roads stretching up to 9 km only in July. But, the GAIL contractor began the work a month before getting the permission, alleges HSR Sector 2 Residents’ Welfare Association President Brigadier R S Murthy.

This apart, the GAIL continued to violate the rules, by digging trenches in the areas that were not the part of 9 km stretch. BBMP granted permission to lay pipeline in other parts of HSR Layout (measuring 79,940 metres) only on October 15th, 2015. “Perhaps, the GAIL Gas Ltd started the work much in advance assuming that they will get the permission,” Brigadier Murthy informed Citizen Matters. 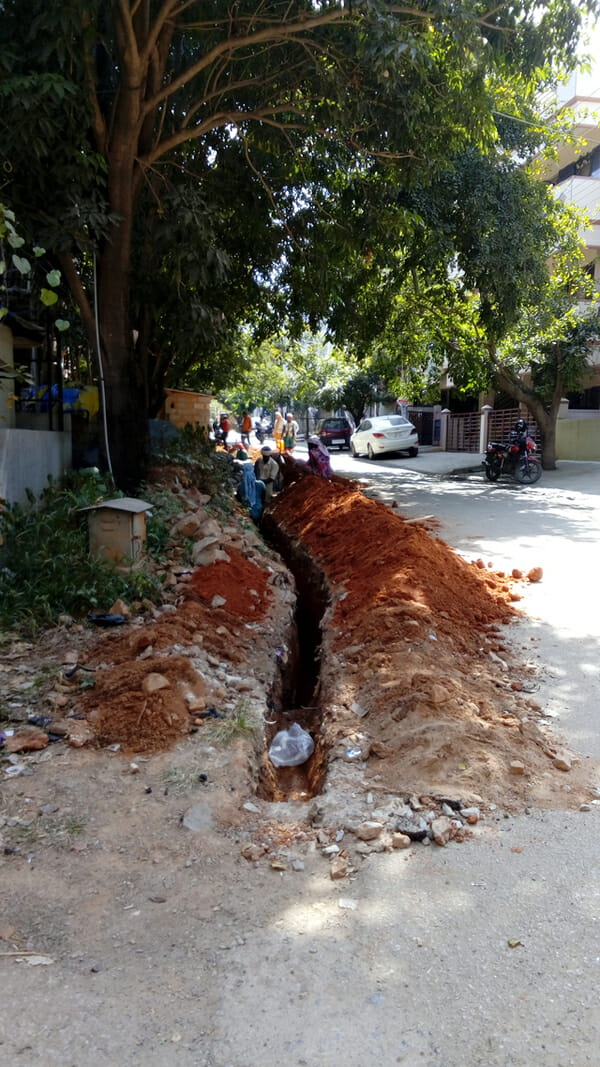 Trenches have been dug by the roadside for GAIL’s PNG project in HSR Layout. Pic: Akshatha M

Residents of HSR Sector 2 smelt something fishy and approached BBMP in June when the work on pipeline began. They demanded for a meeting with the GAIL officials to know what was happening. “But, instead of talking to us directly, GAIL though being the project implementing authority, arranged for our meeting with its contractors which was not acceptable. They did not want to come into the picture at all. After pressurising them a lot, GAIL Gas Ltd finally arranged for our meeting with S Angamuthu who is a Senior Manager at GAIL. It was only then that they shared their work schedule and project plan with residents,” says the ex-serviceman.

Ever since the work began in HSR Layout, the residents say that they have kept an eye on the status of work. “GAIL has violated some of the terms and conditions laid by the BBMP while granting them permission to start the work,” says Chandrashekhar, Secretary of HSR Sector 2 RWA.

According to the residents, GAIL has violated following terms conditions:

“We are not against the CGD. A city like Bengaluru needs it, but not at the cost of violating the rules and causing public inconvenience,” says Brigadier Murthy, while calling for strict monitoring and responsible work from GAIL authorities.

Following the residents complaints, Citizen Matters tried to elicit response from GAIL Gas Ltd and BBMP. Responding to the complaints, a senior official from GAIL Gas Ltd maintained that the company started the work in HSR Layout only 3-4 months back after obtaining necessary permission from all the departments.

On the complaints of not following the BBMP norms, the official said: “It is a big project and there will be some lacunae. We are doing our best to rectify them. We are ensuring that the trenches are restored to its original form. But, public can not expect the restoration to happen in a day or two. Once the land is dug up, we have to give some time to settle down properly. If the restoration is done without a gap, it will start caving in. If we lay 1 km pipeline in HSR Layout on one day, we cannot restore the road on the following day. Restoration of a few kilometres will be taken up simultaneously,” the officer said.

Bommanahalli Assistant Engineer Janardhan said that BBMP will have to do an inspection of the project site and submit a work completion report along with 3rd party inspection once the project work is completed. “We will not give the Satisfactory Work Done Certificate to GAIL if they fail to restore the property to its original status,” he informed.

However, he maintained that there has not been any major issue so far with the GAIL’s work in HSR Layout. “There was complaint of them digging the newly asphalted road which we stopped,” he said.

What can you do?

HSR Layout residents who are facing inconvenience due to GAIL work or find the contractors not following the norms, can contact GAIL at 080-68888081 or mail: gailgashelpline@gail.co.in

An exhibition of unusual photographs of stones by the riverside make for interesting viewing on a lazy rainy afternoon for the city’s art lovers.