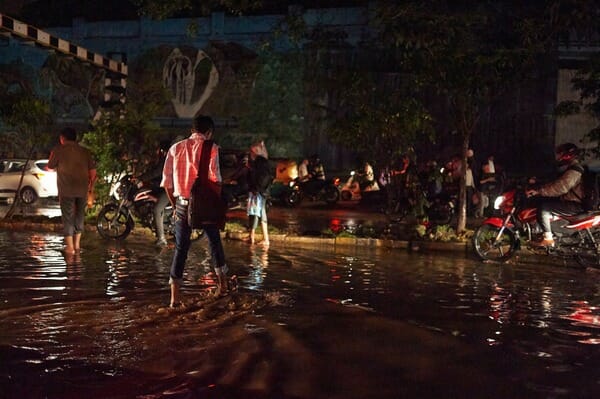 Every rain leaves the city battered, with no space for water to flow, showing lack of urban planning. The colloqium discussed possible solutions. Pic: Ishaan Raghunandan

Following  the  downpour  in  Bangalore last week that left the City ravaged, Public Affairs Center (PAC) organised a colloquium on ‘Urban Resilience,’ on September 27, 2014. The event held at Hotel Capitol with the support of the International Development Research Center, Canada saw many concerned experts from various fields sharing their knowledge and advocating solutions on how to improve the resilience factor of the city.

Addressing the conference, R Suresh, Director, Public Affairs Center, said, “we have always approached the government in different ways. We need to join hands with private stakeholders to implement the research ideas and plans that are going to be taken up in the arena of ‘Urban Resilience.’ The approach through this program is to voice the citizen’s opinion, emotions and disseminate the knowledge to the same citizens through this research.”

Speaking about disasters, A Ravindra, retired IAS officer, said: “Many disasters are man-made. Unplanned urbanisation, increase in the carbon emissions, land encroachment, improper infrastructure to deliver water and sanitation, had resulted in the recent flooding in the city especially hitting the low-lying areas.” He highlighted the lack of credibility in environmental approvals and explained the planning with respect to land use, sewage, energy, health, education, water supply, waste management, transport etc.

He also mentioned the lack of commitment for segregation of solid waste by the civic bodies, towards solving Mandur garbage problem. Various disaster management authorities like National, State and District Disaster Management Authority have been doing nothing as their web portals are not updated about the social activities other than the tender notifications.

Pavan Srinath, Head of Policy Research, Takshashila Institution, presented the unique idea of a weather station by the citizens and for the citizens. He argued that Bangalore has different climatic conditions across the city. A weather forecast for each part of Bangalore supported by a microclimate forecast network can help people plan their work and life better.

“Bangalore’s topography is unique as the microclimate is extremely diverse. Weather information services are of social benefit and not private benefit. The installation of  automated weather network station on your rooftop and the data access through mobile network can alert a person with the message on weather change in his/her particular locality or area.” He requested the public to support his idea and join weather station network, where in each network costs below Rs 50,000.

Citizen’s Forum, Yelahanka New Town, started in 2002, aims to create a clean and hygienic environment. Prof. Sangunni, a representative of the forum, said: “The organization came up with the program called Green Clean. We started educating children in the disposal of garbage. They are best medium to educate the mass. Teachers of different schools in Yelahanka were trained, who in turn trained their children, which helped us in reaching the larger mass of the town”

Thus the school-going children of Yelahanka New Town have created an example for BBMP zones who are fighting the problem of garbage disposal systems. With a view to involve children in the project, the forum provided free bins t children, who were then asked to collect and segregate the waste in their school campus. The involvement of children in this project has inculcated a good value system in them to live in a cleaner and greener future.

Yelahanka has around 53 parks and a mini forest with 700 trees. The citizen forum has planned to install biodigesters in each park, to dispose the wet waste from the houses nearby. This will in turn make the job easy for the BBMP.

Lack of professional manpower, improper infrastructure and difference of opinion in the civic bodies of the city have resulted in the sewage water and other effluents to be drained in the lakes and storm water drains. “The rejuvenation of Allasandra and Puttenahalli lake is must and should as they are the abode for many rare bird species which migrate and come here. But the industrial waste has shrunk and poses a threat to many such species.”

Ulka Kelkar, a fellow at The Energy and Resources Institute (TERI), presented her ideas on exploring multiple dimensions and connecting various bodies to build resilience in cities.

Sridhar Pabbisetty, Chief Executive Officer of Namma Bengaluru Foundation, spoke on how the city can manage its water effectively, and the hurdles that stop this. The city can spring back if the elected representatives show some enthusiasm to the ideas provided by citizens and experts, he said.

“The population is growing and 19.2 MLD water from various stages from Cauvery is not sufficient. Water tankers moving in every area are an indication of the problem. The solution can be easily achieved by setting up STPs that can treat 1,060 MLD of sewage. At present BWSSB can treat only 721 MLD sewage,” he added.

Pabbisetty stressed on water audit, to check how much is treated and how much is used for various purposes. Essaying the sorry state of many lakes that have been polluted, he asked the government to embark on the underground drainage project. “If every house is linked with UGD, then no sewage will enter Storm Water Drain, thus ensuring the tapping of rain water. The water board if goes by rules that is effective implementation of groundwater recharge act,” he said.

The lakes act as the checkpoint during heavy rains. If the storm water drains are free, then floods can be averted. In case of 1.5 lakh bore-wells in the city, as per 2011 survey, if recharged by setting up percolation tanks, the water issue can be addressed, he observed.

N S Mukunda from Citizen Action Forum highlighted the mismanagement of water and growing gap between demand and supply. He argued that by treating waste water, Bangalore will be able to fulfill its water needs, without depending on Cauvery river.

P Manivannan, IAS, Managing Director, Karnataka Urban Water Supply and Drainage Board (KUWSDB), pitched for delegation of powers and explained that as the population grows and bureaucracy hurdles increase, problems take much longer time to solve. He gave an example of the blind pilots who were guided by the screams of the travelers in the plane, and advocated citizen-led change which can bring in reforms in any situation.

Dr Bejoy K Thomas, fellow, Centre for Environment and Development, Ashoka Trust for Research in Ecology and the Environment (ATREE), explained how water stress of the city can be addressed through waste water reuse, and underlined the challenges. Dr Krishnaraj, Associate Professor, Center for Economic Studies and Policy, Institute for Social and Economic Change, Bangalore, compared water supply systems in Bangalore and New York, in the backdrop of climate change.

Issues are my greatest opponents: B K Shivaram

In an email interview to Citizen Matters, B K Shivaram, brother of AICC General Secretary B K Hariprasad and ex-ACP for CCB, answers the questions. He is contesting from Malleshwaram as the Congress candidate.