Bengaluru has seen many experiments in urban space management. Tender SURE is one of them that is hitting headlines of late. The idea of Tender SURE was born when the Bangalore City Connect Foundation (BCCF) funded and co-ordinated the design of the Tender SURE concept in the year 2009 and implemented a pilot project on Vittal Mallya Road.

After the pilot project’s implementation, the BCCF joined hands with the Government of Karnataka (GoK), the Bruhat Bengaluru Mahanagara Palike (BBMP) and Bangalore Metro Rail Corporation Ltd (BMRCL), to implement the project on a few more roads. The technical assistance for the project was given by the Indian Urban Space Foundation (IUSF), now known as Jana Urban Space Foundation (JUSF).

In 2012, the Karnataka government decided to implement the Tender SURE design for around 50 roads. BCCF offered to prepare Detailed Project Reports for 15 roads in the Central Business District area, and to review the designs done by BBMP for the rest of the roads.

With the construction of Tender SURE roads kicking off across Central Bengaluru, criticism against the roads has also gone up. V Ravichandar of BCCF tries answering some of the questions surrounding Tender SURE, in this article.

Being an ardent proponent of Tender SURE (Specifications for Urban Road Execution) as the roads of the future for Bengaluru, one has lost a lot of motorist friends! One gets accosted with loads of objections about the new age road project in Bengaluru. Here is the response to the most frequently mentioned objections:

Honey, these folks have shrunk the vehicle lane…

Yes, the lanes have shrunk by 4-7 feet depending on road widths but they are uniform across the road stretch. If we accept X + Y = Z as a finite equation, and if roads are to be designed around the pedestrians and cyclists, something has to give in, and in this case it is the vehicle lane width.

Currently, every spare bit of road is asphalted and given away to vehicles. But this is grossly inefficient apart from being wrong – there is enough scientific data to show that vehicles that go out of lane to return back to it end up delaying everyone down the lane chain.

Vehicles will move more smoothly and faster with uniform lanes. Given the challenges in land acquisition, Tender SURE checks out the minimum right of way within a road stretch and plans for the uniform motor lanes based on that.

Here’s a factoid to think about. The St Marks Road width from SBI to MG road is 9.6 metres (3 one way lanes). My friends indicate that this is an arterial road and we need more road width for motorists. This is more than the one way lane at MG Road! Comparing with one-way lanes across the city, the St Marks road would be among the top 5% road lengths in terms of lane widths while having the maximum footpath space. 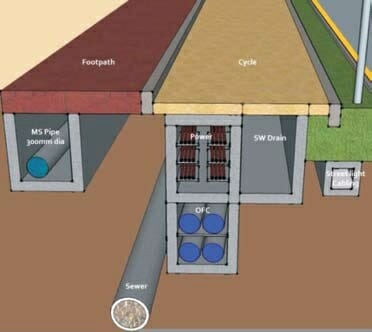 Sewer, electricity, water and all other utilities will exist under the footpath on a Tender SURE road, thereby eliminating the risk of frequent digging up of the road. Pic courtesy: V Ravichandar

Why so much importance to Pedestrians? That’s not me…

Roughly one pedestrian dies on Bengaluru roads every day. Pedestrian is as important a mobility mode as vehicles. Over 50% of trips in a day are either fully or partly on foot. The invisible lower middle class and the poor use the non-existent footpaths. Nothing about our road designs takes the pedestrian into account.

A civilized society takes care of its vulnerable groups – on our roads that would be the pedestrian. Good pedestrian paths make for healthy lifestyle – by the end of next year one can walk from Trinity circle on MG road to Cubbon park on Tender SURE footpaths. That should surely count as progress!

Why so much width for pedestrians?

The underground utilities are all planned under the pedestrian walkway. So consider the width required in laying Sewerage pipes, Water pipes, Power cables, OFC / Gas cable ducts, Storm water drains, alongside – it does need a fair amount of space! And then there are some massive trees on some of the walk ways. We need to preserve that too and also provide for pedestrians to walk on the footpath without having to step onto the road.

And if you think the utilities along the ‘motorable’ roads are ok, the jutting BWSSB manholes across our city putting everyone at risk and slowing down traffic should make you think again. Isn’t it smarter to take them utilities below the pedestrian paths?

Pedestrians ok, but where are the cyclists?

Yes, it takes a very brave individual to take their cycle on our roads. But build the safe passages for them and they will come. Copenhagen has over 70% cycle usage with supporting infrastructure. It’s got a zero carbon footprint and a sustainable mode of transportation even after our fossil fuels dry up. And Bengaluru has the weather that cries out for us to take out our cycles for short commutes.

Coming back to my car, what about parking spaces?

Our roads are already clogged and it’s going to get worse with over 1,500 vehicles being bought per day. There is no hope for the future unless we embrace public transportation (rail, bus, shared cabs, autos) and alternate modes (walking, cycling) on a large scale basis. In London at the iconic Shard building there are no parking slots except for handicapped persons. The message is clear – you are welcome, your personal vehicle is not. So once again – parking is not a birthright that the city needs to or can deliver on. The city needs to focus on other mobility modes (including walking) and public transportation investments are critical.

Traders say their business will get hit…

The competition for trade on the road is the mall experience. It’s in their interest to have pedestrian-friendly infrastructure, if they are to leverage their open Bengaluru air advantage. Even in extremely popular food street at VV Puram, vehicular traffic (which can easily take alternate routes between 8 pm to 11 pm) is allowed through the narrow street teeming with pedestrians. There is data from European countries to show that areas that have gone fully pedestrian have seen a two to threefold increase in their footfalls and business. Our High street retailers have been short-sighted when it comes to embracing pedestrians.

Tender SURE roads are too expensive!

Yes, the capital cost is high because 65-70% of it goes towards provisioning underground utilities. But in life cycle cost terms, the payback over a 7 to 10 year period is better than our current road model of the need for repeated repairs every 6 months. And we are not accounting for the serious loss of productivity, fuel consumption due to the pot holed nature of our roads.

But these roads are taking so long to build!

Yes, they could be executed faster and better. There are challenges in building them—there are no maps on current underground utilities; entry / exit to premises have to be provided through the construction, existing utilities have to work while the new roads are being built; it’s a first of its kind project leading to new challenges being encountered and the incessant rains last year have not been helpful. Yes, there is scope for further technical improvements, better implementation and can happen in case the powers that be decide to extend the Tender SURE project with its core principles elsewhere in the city.

That’s for the citizens to be the judge and decide. We have 13,000 kms of BBMP-built and maintained roads. 9 kms are currently being built as roads of a different kind that respects and provides for pedestrians and cyclists too while ensuring vehicular movement does not suffer.

One is unable to understand the vehement objections to a pilot stretch that is less than 0.001% of our roads. If it is a flop show as many predict, we always have the current, presumably ‘well-honed’, BBMP road building and maintenance model where we can be stuck with our existing road network forever!

In due course, experts will say we need monetary congestion charges for the city centre like London, Singapore. Think of Tender SURE as a physical congestion charge that embraces multiple mobility modes.

What’s this Tender SURE all about?
Here are the serious issues about TenderSURE you should be worried about!
NBF asks BBMP to desilt drains, repair footpaths and expedite TenderSURE

About V Ravichandar 6 Articles
V Ravichandar is a Bengaluru-based civic evangelist. Full disclosure: Ravichandar is an advisor and one of the investors in Oorvani Media Pvt Ltd, that runs Citizen Matters website. Opinions expressed are his own.

A young Bangalore resident concerned on the amount of tomatoes that will be wasted during Bengaluru’s La Tomatina festival – takes actions and engages with the local government.

How a Bengaluru apartment created a ‘food forest’

The forest provides the community free food, and has brought back bird and insect species that had long vanished from the area