With its population growing at the rate of 4.45 percent annually, Bengaluru is now the largest city in India after Delhi and Mumbai. The city shelters about half of Karnataka’s urban population.

The administration of such a huge, expanding population calls for a structure with a holistic approach, which the BBMP (Bruhat Bangalore Mahanagara Palike) lacks.

An alternative administration that will overcome the shortcomings of BBMP and address the city’s issues, is the need of the hour.

Bengaluru has been expanding rapidly over the last three decades. In 1991, the then-BMP (Bangalore Mahanagara Palike) expanded to include 87 wards, and later to 100 wards in 1995.

In November 2006, state government dissolved the BMP council. Its 100 wards were then merged with seven City Municipal Councils (CMCs), one Town Municipal Council (TMC) and 110 villages around the city, to form a single administrative area. By April 2007, this area with 198 wards was renamed the Bruhat Bangalore Mahanagara Palike (BBMP).

The city continues to expand rapidly. By 2031, BBMP’s population is projected to be around 16.5 million, and its area is not expected to remain frozen at the current 780 square km. The adjoining taluks of Hosakote, Nelamangala, Devanahalli, Yelahanka, Doddaballapur, Bidadi-Ramanagara, are already urbanised. It is only a matter of a few years before they too would be absorbed into BBMP.

Hence, vital matters like water supply, solid waste management, transport and mobility, air and water pollution, flooding etc should be planned and efficiently executed for the Bangalore Metropolitan Region (BMR) as a whole. BMR comprises Bangalore Urban district, Bangalore Rural district (Devanahalli, Doddaballapura, Hoskote and Nelamangala taluks) and Ramanagara district. It is spread across 8005 sq km, and has population of over 12 million.

Restructuring cannot be done for the smaller BBMP area alone, or its five proposed fragments (BBMP has been proposed to be split into five municipal corporations, under a Greater Bengaluru Authority). Any restructuring by sub-dividing the BBMP, or by incorporating just the BDA area into BBMP, will not be a solution as the actual urban area has already crossed these limits. 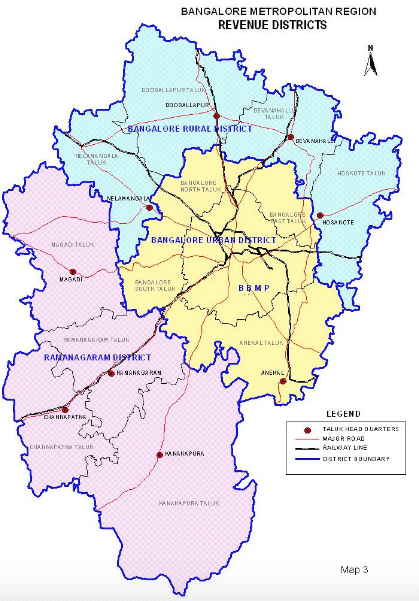 Bifurcating, trifurcating or quartering BBMP into three, four or more territorial bodies will only worsen the macro-problems, and will not address the needs of the larger metropolitan region. Hence there is dire need for a more holistic, more administratively-competent and larger organisation with political authority, financial powers, administrative status, capacity and accountability.

On the model of the Greater London Authority, a Bangalore Metropolitan Council (BMC) should be constituted, with the jurisdiction of the entire BMR. It should have the ability to address the four major crises faced by the city’s population – the Four Horses of Bengaluru’s Apocalypse – water, traffic, garbage and air pollution.

By their very nature, these are huge problems, requiring large funds and planning. The planning, coordination and implementation of such projects cannot be confined to BBMP areas alone. These have to be dealt with in a holistic manner in the larger metropolitan region of 8005 square km, which is the actual urban area of Bangalore.

BBMP has neither the jurisdiction nor the capability to execute such projects. Hence, it is necessary to have a larger Bangalore Metropolitan Council (BMC), with a higher level of political accountability and administrative capability.

The BMR, and its administrative body BMC, will have 41 town councils or boroughs under it, such as Jayanagar, Cantonment, KR Puram, Yelahanka, Ramanagara, Devanahalli etc. (The Greater London Authority has 33 boroughs or local bodies, and does not have an equivalent of BBMP.) These 41 town councils will, within their respective jurisdictions, repair and maintain roads, parks, public places, along with public amenities including street lighting, burial grounds, parking lots, bus stops and public conveniences.

Town councils will also look into public health matters, maintain records of vital statistics including birth and death registrations, and attend to public grievances. Each of these town councils will have populations not exceeding a manageable five lakh.

Each will elect 10 councillors, who will then elect the president of their respective town council. As mentioned earlier, the primary function of town councils is of maintenance. They will not have large funds or contracts that give scope for corruption as in BBMP now.

BDA to be reconstituted as Planning Board

The BDA should be reconstituted as Bangalore Metropolitan Planning Board (BMPB) with a chairman of the rank of the Principal Secretary. The Board will include three experts, on contract from the Indian Institute of Science, IIM-B and a national body on town planning. It will also have three members elected by the BMC.

BMPB will prepare the region’s Draft Master Plan after an elaborate and mandatory consultation with citizens’ forums, as is the case in other metropolitan cities like the Seoul Metropolitan Government in South Korea.

BMC to have 120 members and a secretariat

The BMC, the overarching body that governs BMR, will comprise the presidents of all 41 town councils, along with all 36 Bengaluru MLAs and the chief minister. BMC will have 120 members overall, as discussed below.

BMC and its Chief Commissioner will supervise the Planning Board (BMPB). Similarly, the existing BESCOM, BWSSB, Pollution Control Board (for BMR area), Lake Conservation Development Authority, BMTC and the BMRCL will all work under the supervision of the BMC and its secretariat.

A legitimate complaint of Bengaluru citizens is that too many independent bodies have overlapping jurisdiction over the city, without any coordinating body to integrate and harmonise their work. These agencies often work at cross-purposes, and have no accountability. By bringing all of them under the BMC and its secretariat, the coordination of these bodies can be ensured.

The BMC would help ensure that the nearly one lakh acres of public land under encroachment is recovered, and is used effectively for public purposes, housing, non-polluting industries etc. Much of the encroached land belongs to the Revenue Department, but is largely being misused by the rich and the powerful. Likewise, many lakes are encroached. These lands have much monetary and practical value for the government.

Else, with the present BBMP set up, the four impending calamities – water, traffic, garbage and pollution – will destroy the city. And Bengaluru is too big to fail.

[Disclaimer: This article is a citizen contribution. The views expressed here are those of the individual writer(s) and do not reflect the position of Citizen Matters.]

About V Balasubramanian 3 Articles
V Balasubramanian retired as Additional Chief Secretary to the Government of Karnataka. He was also the Chief Adviser to the Joint legislature committee on land encroachment (Ramaswamy committee), and the Chairman of the Task force for recovery of encroached government land.

Though the city is preparing for BBMP elections, there’s still a slim chance that polls may be delayed. That is, if the Supreme Court decides so. What’s going on?

Efforts to mobilise citizens to apply for ward committee membership have gained splendid traction in the last few weeks. Citizens’ groups such as Lanchamukta Karnataka Nirmana Vedike (LMKNV), Citizens for Bengaluru (CfB) and B.PAC have

The RERA bill has been passed in Lok Sabha and Rajya Sabha. The Bill with a number of safeguards to protect home buyers’ interest, has crossed all hurdles. Citizen groups in Bengaluru too have played a role in pushing the Bill.