Saturday December 4th 1971. Morning classes had just begun. Schools had “morning class” on Saturdays – an awkward arrangement with classes starting at 7:30 or some such hour and ending around noon.

The previous night, Friday December 3rd 1971, the nightly All India Radio (AIR) newscast had announced the outbreak of war between India and Pakistan. I missed that. Saturday morning, the newspapers carried tall big headlines announcing the events, with details. I merely glanced at these.

The second period was Social Studies class by Sri B Narasanna (BN, as he was called at school). We pulled out our extremely dreary textbooks getting ready for the class in a resigned, mechanical way.

This BN, I must tell you, was also a neighbour a few houses before ours on the street in Jayanagar 6th Block.

His was a modest but very neat and nice house. A garden, with an area larger than the house’s, sporting kākada and malligé, and dāsavāla (hibiscus) plants. For pūjā at home, I often went to BN’s house and asked for permission to pluck a few flowers. This was invariably addressed to his wife Smt Kamalamma, who never said no. The assent was always accompanied by a smile. She was very fond of me. And very kind.

BN was very quiet. He appeared slightly aloof. A very gentle person. Outside the classroom.

Inside, he was a dynamo. Keeping us transfixed one moment, in splits with pealing laughter the next, but always a brilliant raconteur. What first drew him to us was our shared hatred of the textbook. He despised it! We had found the first kindred soul in a teacher!

Until the moment he entered the classroom, if you didn’t know his profession, you would think him a mild-mannered lower-level clerk in some government office.

The second step across the threshold of the classroom, and he was a totally different person. 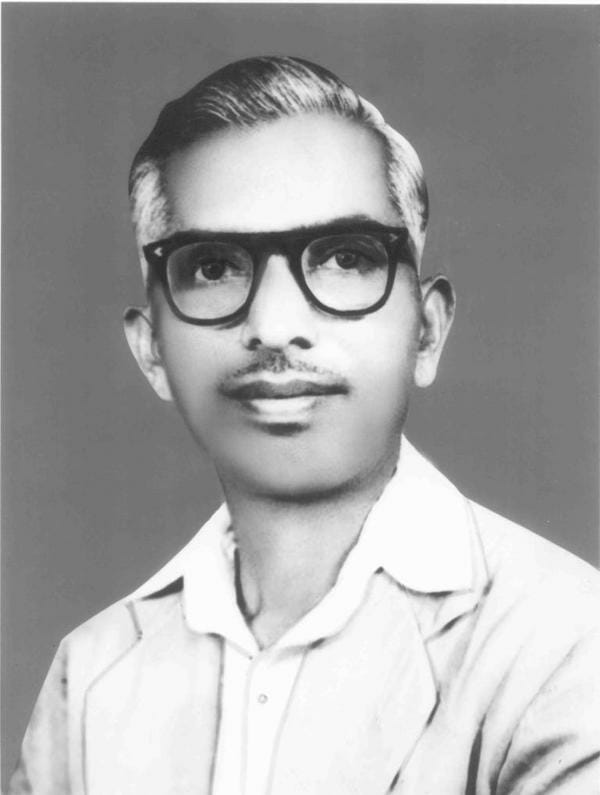 His first words were musical, “Put away your textbooks.” We hastily and joyously stuffed that piece of whatnot into our school bags. Around seventy of us, in a gallery classroom (N7) at the National High School (NHS), were curious to see what would happen now. Will he take us to N8 to screen a film? Oh, joy!

BN then said, “Five minutes world news.” No film? Oh, but never mind, at least it was not the blasted textbook!

Then, he cleared the blackboard and proceeded to draw the entire continental outline map of the world!

With a peculiar way of holding the piece of chalk, before you could say “dotted lines”, he drew the Tropics of Cancer and Capricorn as dotted lines. The in-held breath came out as a gasp now and, had we known the word “Wow!”, we would have uttered it with awe.

Then, he began with the announcement that war had broken out between India and Pakistan.

To answer this, he started with the partition of the subcontinent in 1947.

From there, to the latest as was reported in the newspapers that morning, he took us on a historical-geographical flight, much like Kālidāsa’s cloud might have done. We also discovered that he was not only a brilliant raconteur (because he told a good story, and told in language that we kids could relate to in an instant), but he was also a great caricaturist! So, Indira Gandhi and Richard Nixon’s tense meetings in Washington DC were captured in Madam’s downward pointing beaky nose down which she glowered at Nixon. He, for his part, was glaring up at her over the tip of his up-curving schnozzer, eyebrows knitted in a frown.  A few deft lines over their respective heads, accompanied by BN’s lively narration, and we saw they were very upset with each other and shouting at each other. A lot of drama added for effect.

Generals Yahya Khan and Tikka Khan, Chairman Mao, PM Zhou … every one of them brilliantly caricatured and their roles narrated to perfection.

I don’t remember breathing during that entire exposition.

Five minutes world news? The bell had rung (40-minute period), we were 10 minutes into the next period, the teacher was standing outside, getting more upset with each minute passing, pointedly looking at his watch … none of us dared even blink for fear of missing the grand theatre in front of us.

Finally, BN realized what had happened and abruptly called a halt to the proceedings. We were not happy, but hey!

Mr Zulfikar Ali Bhutto had thundered in something about a “thousand-year war” with India. In the event, this war lasted all of 12 days with a unilateral and unconditional surrender by Pakistani troops in the Eastern theatre, and Bangladesh was born.

Throughout that time, no textbook. It was only the war we talked about in BN’s class.

I knew we both got the same newspaper. So, my newspaper reading habit started on December 5th 1971 – I just had to be ahead of BN so that I would know what he was talking about in class.

Propaganda films were shown in public places. A huge white bed sheet was tied to two tall stone pillars in the grounds in front of the Patālamma temple on Elephant Rock Road. This was the screen. One or two reel films showing some selections of news, the Prime Minister’s speeches, visits to refugee camps, etc helped keep emotions and patriotic fervour up. “Do not listen to rumours”, “Do not spread rumours”, and such other exhortations were repeated.

It was momentous for the subcontinent, for the people of Bangladesh, and to the geopolitical doings of the time.

But it was momentous for me in a very personal and powerful way. The seeds of my love for geography (and history) were sown during the 2nd period, 8th standard, on that December Saturday in 1971.

A hero appeared and began the raising of an eternally grateful śishya.

Anything and everything on the Indian street can be stolen – especially if it offers a resale value, or is reusable. The crucial thing, is to make your design steal-proof. Part 1 (of 3) of Chapter 11 of The Ugly Indian book.

Residents of Purva Panorama have come a long way in waste segregation. However, they too have their own challenges. A resident shares her experience.