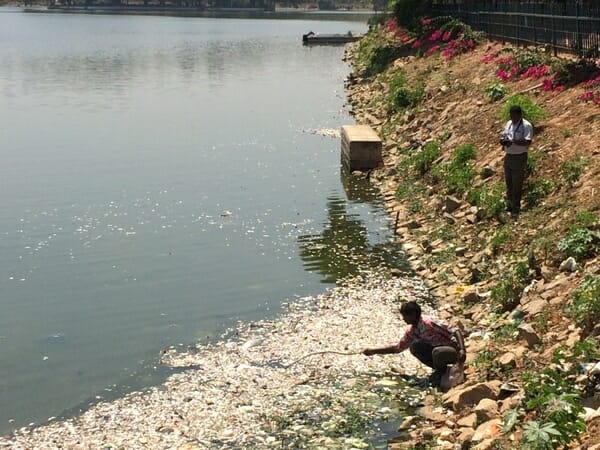 Even as he holds a big fish in his left hand, a young boy tries to reel in another fish. Pic: Ganga Madappa

Picture this. A young lad sits on the edge of Ulsoor lake, with a stick in hand. He immerses one end of the stick into the water and moves it through the water. In a matter of seconds, a large fish floats to the edge and the boy picks it up.

As he picks up the fish, someone shouts from the crowd, “Ai Appu! What are you doing? Drop it… it’s poisonous! Go wash your hands!”

The boy drops the fish back into the water, scooches a few metres away, dips his hands into the water again and washes them. Well, you could say that the boy was indeed fishing. But these were no live fish! 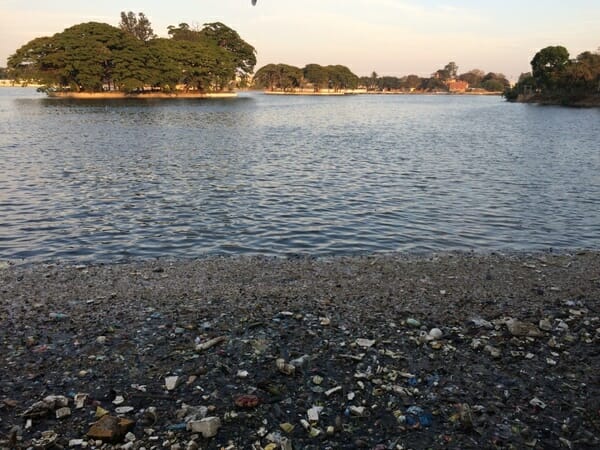 Garbage and dead fish float on the edge of the water. Pic: Ganga Madappa

On the morning of Monday March 7th, as walkers arrived at the Ulsoor lake premises for their morning walk, they were assaulted by the stench of dead fish. What they saw was worse! Tens of thousands of dead fish—small and large—lay floating on the water at the edge of the lake.

Not the first time

The phenomenon which was witnessed at Ulsoor lake, of localised mortality of the fish population in a water body is typically referred to as fish kill.

Studies state the following as some of the reasons for fish kill:

However, this is not the first incident of such a nature in Bengaluru.

A 1995 Electronic Green Journal report talks of a similar incident at Sankey Talk in June 1995. Ulsoor lake itself was witness to this phenomenon of en masse fish death about 11 years back. In January 2005, a large number of fish were found dead over a period of four days. At the time, reduction in oxygen level in the water, fish density and growth of algae were speculated as the reasons for the fish kill.

In June of the same year, many fish were found dead in Sarakki lake (earlier referred to as Puttenahalli lake). While residents of the area said the water was poisoned because of a feud between rival fishermen poisoning the water, the Deputy Conservator of Forests at the time attributed it to sewage entering the lake.

Even as recently as June 2015, Kaikondrahalli lake witnessed an incident of fish kill. Experts told the citizens looking after the lake that it was a yearly occurrence at the lake because of the Biochemical Oxygen Demand (BOD) content of the water affecting Dissolved Oxygen (DO) levels or because of huge fluctuations in water temperature.

The Facebook post explains it in layman’s terms: “The lake ecosystem has many layers where the suspended particles, murkiness, temperature and oxygen levels vary. If certain layers get colder, then the organisms inhabiting those layers may move to the layers above to survive. And this decrease in temperature may cause some fish to die as they cannot survive even on the top layer.” 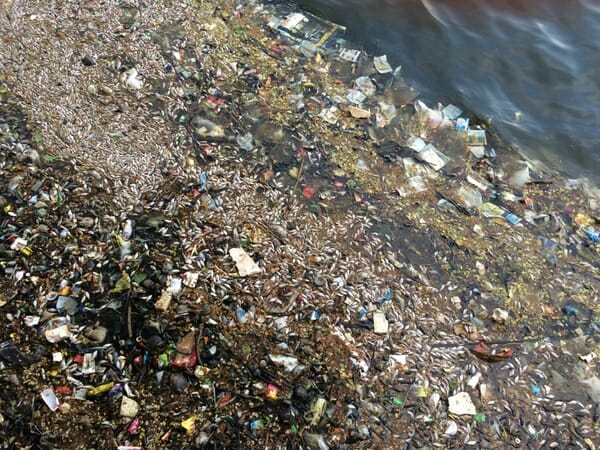 Purushottam Venkatraman, President of the Ulsoor Lake Residents’ Welfare Association (ULRWA) told the media, “The small fish that have surfaced, these are very sensitive to changes, so they have died. But you can see the bigger fish also, they have also died. This only means that something is very wrong; it has reached such a level where nothing can survive.” When oxygen level in the water is low, fish of all sizes are bound to die.

Krishnakumar, the manager of Garden Care, a nursery that has set up shop right opposite the Ulsoor lake main entrance said, “For the past three days, the lake has been stinking more than usual. It was  only on Monday morning that I learned that many fish had died.”

Purushottam of ULRWA believes that the current fish kill incident happened because more than the regular amount of sewage entered the lake. 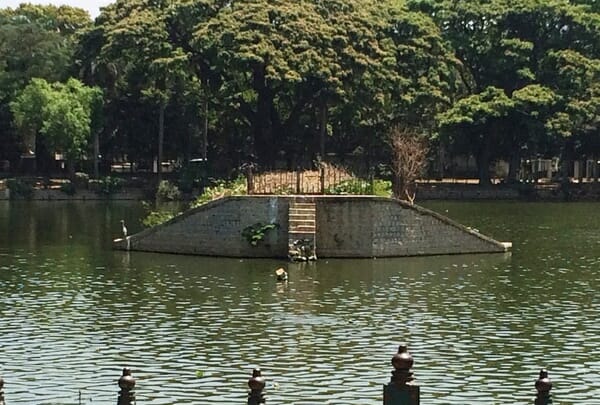 The point where ULRWA claims that the bund is broken. Pic: Ganga Madappa

The ULRWA says that the bund that separates the sewage water from flowing into the lake broke about two years back. Purushottam said, “We brought this to the notice of the authorities, but they have done nothing. All the sewage from east Bangalore comes down in the stormwater drain that comes to Ulsoor lake; that is the natural flow. We have to separate the sewage from getting into the lake. Now sewage has gotten into the lake. Oxygen levels have depleted. The fish has died.”

Shivakumar, a resident of Ulsoor, who has been visiting the lake from the time he was a young boy said, “When I came to the lake around two days back, they were few fish on the edge of the water. When I came in on Monday, there were thousands… You only need to look at the colour of the water and the amount of rubbish floating to know all is not right.”

Citizen Matters met the Karnataka State Pollution Control Board Chairman, Lakshman at the lake premises on Monday evening. While he did not have a clear cut reason as to why the fish had died, he said it could be due to more than normal sewage entering the lake. Two possible reasons he cited were: 1) Depletion of oxygen because of increase in algae; 2) Leakage from the old swimming pool.

No license to sell fish inside lake premises

Purushottam said that many people were fishing at Ulsoor lake and claimed that the fishermen block the passage where the sewage water goes out. He said, “The Fisheries Department has given unhindered access to fish in the lake, 365 days, 24×7. These are one of the major culprits who have got the lake to this level. They have blocked the passage for the sewage water to go out. Even during the rains, they close it, because the fish will escape.”

He also stated that the fishermen are charged a miniscule amount of Rs 50 to get a fishing licence. However, someone from Corporator (of Ward 90, Ulsoor) Mamatha Saravanan’s team countered this and said that the fishermen need to pay Rs 5,000 to get a licence. However, both parties were in agreement that all not right with respect to the fishing permits.

The BBMP has allegedly granted permission only to fish at the lake. The fisherman are supposed to sell their catch elsewhere. But according to Babu, one of the workers who is contracted to clean the lake, “In the morning, you can see about six-seven of them selling the fish. They have put up a temporary shelter of sorts near the open gym area, where they store their catch.” A member of the RWA said, “We have brought this to the notice of the BBMP considering it comes on their property, but so far nothing has been done about it.” 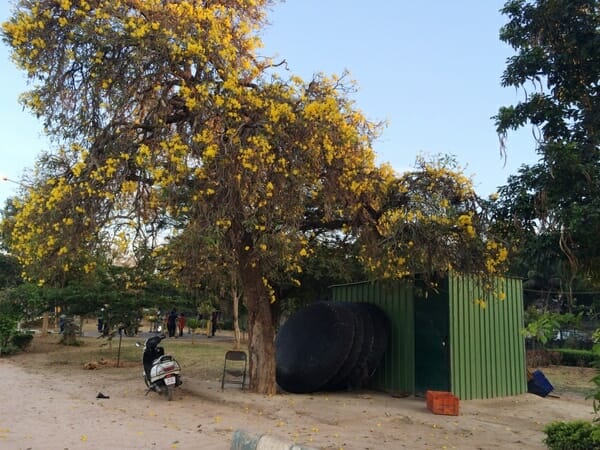 What is interesting is that for all the fishing that happens at the lake, most residents of the area that Citizen Matters spoke to are skeptical about the quality of the fish.

Shivakumar said, “I know people buy the fish from here, but I’ve never tried it. My mother used to say that many people committed suicide in the lake, so we never bought the fish”. Another walker, a woman who frequents the walking trail almost every day says, “I bought the fish once a few years back, but the skin was fatty and very bitter after it was cooked and my family refused to eat it.” Rupa, another walker says, “I don’t want to take a chance. The water looks polluted, so I don’t know if the fish will be healthy.”

So, what next for Ulsoor lake?

KSPCB Chairman Lakshman said that they clean up process had already begun. BBMP workers were manually collecting the dead fish using the coracle. While citizens were worried that the fish being collected would be sold in markets, the Chairman clarified that the fish would be buried deep in the ground on the empty tracts of land near the Gurudwara side of the lake premises. He also added, “We have also sent samples to our lab to understand why the fish population died. We expect the reports from the analysis to be out in 72 hours.”

The Chairman added, “KSPCB is in conversation with the various stakeholders as well—BBMP, BWSSB, Fisheries Department, MEG—to find out whose role is what with respect to the lake. If we find out due process has not been followed, we will take action against the defaulters.”

Citizens want the authorities to clean up the mess before the condition of the lake deteriorates further. A member of the ULRWA who did not want to be named said, “BBMP needs to continue doing the annual maintenance which includes clearing of the weeds, pruning hedges, etc. BWSSB needs to ensure that there is no sewage flowing into the lake. It would be ideal if a sewage treatment plant is set up as well. The Fisheries Department needs to monitor the fishing activity that is going on at the lake. Citizens living around the lake need to take responsibility as well.” He further added, “If the authorities collaborate with local groups, we will be able to set right whatever is required. Hopefully this is a wake-up call for everybody.” 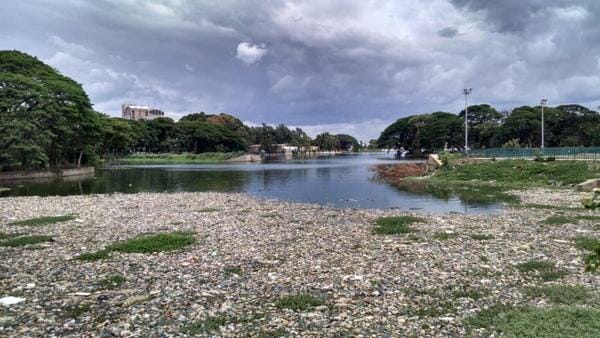 A picture of Ulsoor lake from June 2015 showing the garbage carried in by the storm water drain – plastic, clothes, shoes, leaf litter. Workers clearing this filth claim to have found even pillows and suitcases. Pic: Ganga Madappa

Earlier in 2013, Ulsoor Lake Residents Welfare Association and United Way of Bengaluru had entered into a contract with BBMP to maintain the lake. The MOU said the task of removing weed from the lake is the HLRWA’s, and the BBMP sent notices to HLRWA asking for compliance. The HLRWA members were quoted in a DNA report as saying the BBMP cannot enforce its work on citizens.

BBMP budget 2022-23: Midnight drama could see many city roads dug up all over again

BBMP has allocated around Rs 10,480 cr for Bengaluru in 2022-23. A large portion of the funds are expected to come from taxes and state government grants.