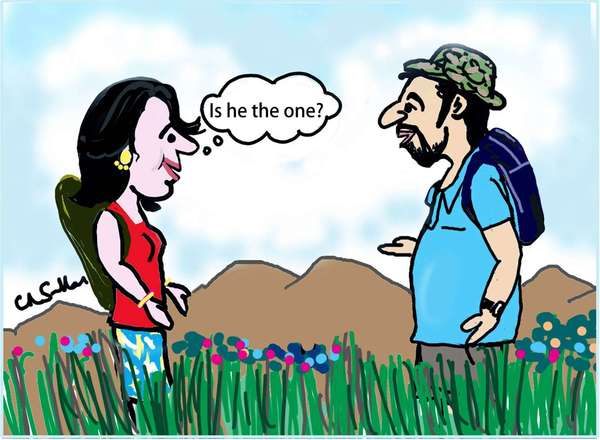 Kavita D, 31, Sheeba Kumar, 29 and Anitha R, 31, have been friends for some years now. Despite diverse backgrounds, they have almost same requirements when it comes to finding a life partner. The guy should be of the “same wavelength,” with “similar interests, mindset and values” and “reasonably liberal.” Being from the same religion is important to Anitha, as it would “ease things out on the parental front” but the community doesn’t really matter to her. And while “well educated” and “established career-wise” are given, what matters most to these women is that the guy should be “like-minded.”

Like-minded is a term that features several times in this story. But where do you find this ‘like-minded’ person? Online matrimonial sites are still the most popular option but many single women and men I spoke to said it was cumbersome to be inundated by profiles and sift through them. “Frankly, beyond these sites and parents I don’t see any hope, unless I find the right guy myself,” Anitha says, only half-jokingly.

Siddharth and Simran Mangharam probably had her in mind when they co-founded Floh with Sid Misra two years ago. Mangharam comes from a corporate background and Simran was the tour manager for late Pandit Ravi Shankar and his daughter Anoushka. They launched Floh (Find Life over Here) because of the need to fill “a huge void among urban, educated people who are single and not able to meet like-minded people.” The singular objective of Floh is to connect singles in real life, Mangharam declares.

Floh, with almost 500 members, is a single’s network like another Bangalore based startup Twoly Madly Deeply (TMD). TMD was started by former consultant Chaitanya Ramalingegowda, is a single’s network. With 500 members in the bag, TMD founder Ramalingegowda says 27 to 34 year olds form the bulk of members. Those open to the concept are usually people who “work long hours, are well-educated, have experienced different cultures and are being pressurised by parents for marriage.”

Activities form the crux of these networks.

Ramalingegowda is sure a “random party doesn’t help people interact here.” So far TMD’s events have revolved around whiskey tasting, cocktail making and dance workshops and even a recent social mixer held in Whitefield for single entrepreneurs. “Because only another entrepreneur may understand the demands and unique lifestyle that comes with running your own show!” Ramalingegowda points out.

Events at Floh range from barbeque sessions and wine tasting to sailing and trekking, quizzes and heritage walks and even a vintage car rally! Mangharam thinks these work as icebreakers. “The trick is to get like-minded people together. The structure of our events is highly interactive. Plus our partners are at the top of their game. If it’s a chef interaction, it will be with Chef Manu Chandra at Olive Beach, if it’s dance, it will be with Lourd Vijay. Our events are extremely well-thought through.”

Floh and TMD are curated sites, where members get taken in only after thorough screening once they register on the site. At Floh they need to connect through a social network site. Members then get invited for events (which are charged separately) and also get access to the online platform on these sites that comprises of singles. At TMD, once people are screened, they may be introduced to likely matches. “We introduce people online. It’s up to them to accept or decline,” says Ramalingegowda. They also have a social platform where people with similar interests can interact. TMD, which has been operational for more than six months, is backed by extensive research, says its founder. Though every single member is screened and verified, Ramalingegowda admits having to deal with around 10% fake profiles.

While TMD is free at the moment, members do need to pay for the events they wish to attend. The cost of events range from Rs 600 to Rs 1,500. “There is no subscription fee as our focus is to create a great network of people. We believe that will attract other people with similar interests,” Ramalingegowda believes.

The cost of the events organised by Floh range from Rs 500 to Rs 2,000. The membership here is a paid one. Mangharam believes that when people pay money for something, they value it. “Becoming a member gets you access to the network of likeminded people, invitation to events and access to our online platform.” Mangharam is sure that “people who seem to apply want something of quality and don’t mind paying for it.”

Floh won’t handhold couples who have met through them to the altar, but they do create an interesting enough platform for members to stay connected. “Hundred per cent of our members end up meeting other members outside of our events and to me that is a success. We create a platform and it is up to them to leverage it,” says the founder.

Sandeep, a 28-year-old entrepreneur, joined Floh because it was a screened group of people with similar mindsets. “I was looking to meet new people, from different backgrounds.” So far his experience has been easy and informal. He sees Floh as “another avenue for you to meet potentially like-minded people. It doesn’t force you to find someone but creates the environment. After that it’s up to you.”

Alisha, 31, is a consultant by profession and a member of Twoly Madly Deeply. Her agenda is to find companionship. And while she has had some interesting interactions, she’s taking it slowly. “I did connect with two people online and I’m having casual interactions with them. What’s great about this is that it’s curated and therefore not flooded by profiles. The connections are screened and safe,” she says.

Safety is a big factor with most women interviewed for this feature. This probably explains why it is also a big focal point with the single’s networks. While TMD has a 60:40 ratio of men and women on the site, in Floh it is the opposite with 60 % women and 40 % men. Ramalingegowda believes that for singles in India, finding a like-minded and compatible partner in a safe situation is an “unsolved problem.” Matrimonial sites, where you encounter hundreds of profiles or dating sites where the male female ratio is highly skewed and chances of obscene comments are high do not work for all. “Our strongest anchor is safety,” says Mangharam. “I have a strong belief that for single men and women to meet in real world, the whole experience has to be well orchestrated and safe. We only meet at well known centrally located places (Olive Beach, a well known restaurant is one of the venues). We also follow a stringent screening process.”

The road to marriage?

It’s hard to say whether Single’s Networks are the new matchmaking trend. Online matrimonial sites are still going strong as are community matchmakers who pass around ‘CVs’ of prospective couples to eager parents. However in a country where ‘dating’ is still looked at askance by many, Single’s Networks, if safely conducted, are probably a good way to meet people.

Traditional matchmaking doesn’t work much, feels Sandeep. “There’s a change happening and people are becoming independent, not just financially but also otherwise. Their ideas are not necessarily in line with their parents’ generations.”

Riddhi, a 32-year-old web designer from Domlur, recently tried out speed dating, a concept new to India and not very popular yet. “You get to meet 10 to 12 people within two hours and have six minutes with each. If you like someone enough to continue the conversation you tick yes and only then is your email provided to that person and you take it from there.” She felt this was another option to meet people, although a bit like “an interview” and doesn’t hesitate to add that this is not her only option.

“The new generation of Indians doesn’t want to be married for the sake of marriage. They want to be married because it is a good choice,” says Alisha. She feels a Singles Network works better than a matrimonial site as even in those the family is involved very quickly. “So the clarity of the decision you made is not your own when there are others involved,” she says.

Mangharam believes a concept like Floh is a requirement now. “For many folks, it’s dehumanising to go through the height, weight parameters that are common on a matrimonial site.” Interestingly, 30 to 35 per cent of referrals at Floh come from parents. “Parents have evolved really well in realising that the game (of matrimony) has changed and the rules are different. Floh forms a good balance between what parents want and what children want,” he adds.

It may have been difficult to get people to sign up initially but Mangharam calls it a chicken and egg situation. “There are people willing to try out and those who are waiting to hear from their friends. People hear about the positive experience of other members and want to sign up.” Ramalingegowda thinks there’s a real demand for avenues like TMD to meet someone with similar mindset and interests and feels people are open about meeting someone through multiple events if the need be.

Although most women and men interviewed for the feature did not wish to use their full names or requested for a name change for several reasons (family, work, etc) most said there was a need for new ways to find a partner.

Family counsellor Meera Ravi of Jayanagar, author of the book ‘Arrange your Love Marriage’, thinks whatever the avenue through which a couple meet, whether a relationship works or not depends on a lot of factors than just being like-minded. “The couple needs to have an open communication. Also it is okay if they don’t have completely similar values or interests. As they agree to disagree and accept the difference and offer each other that flexibility, the relationship can work.” The biggest factor, Meera Ravi thinks, is to be “absolutely honest with no past baggage and an openness to accept differences.”