Mahesh (name changed), a resident of Malleshwaram in Bengaluru, has been watching many cables hanging on a tree near his house, some of them looking as if they are cut. Fed up of seeing them everyday without being able to understand why they exist, Mahesh decided to check the cut cable. To his surprise, the cable was cut at the other end too, and came off easily when he pulled it.

People do not want to touch the hanging cables, because they think it could be electric cable and hence dangerous. As nobody checks them, unused cables laid by cable operators or telephone companies dangle on the trees and poles, without being disturbed for years.

Why are cables hanging from every tree or pole in Bengaluru, often causing nuisance? Why do cable operators hang them haphazardly and why did BBMP do nothing about it? 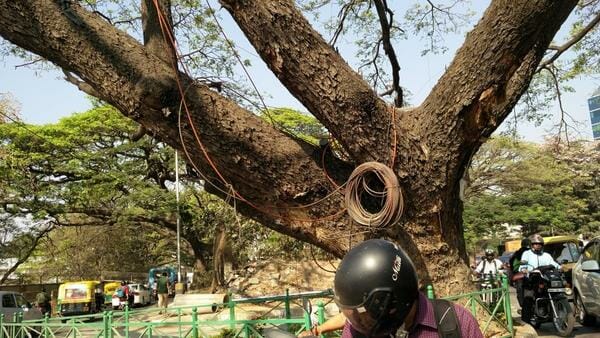 Well, it is because the BBMP so far did not even have a policy that would regulate the laying of cables, except for laying Optical Fibre Cables (OFCs). There was none to tame the cable operators and majority of them would lay/hang the cables without obtaining license from BBMP.

As a result same roads were dug again and again, and telecom, cable and internet operators utilised same lines illegally without paying the prescribed fee to BBMP, which resulted in the loss of potential revenue.

In 2013, BBMP had formed a 10-member committee to inspect and estimate the number of illegal cables in the city and ascertain the revenue loss to Palike’s exchequer. According to a The New Indian Express report, the Committee had estimated that 90 per cent of the cables in Bengaluru were illegal. After inspecting various locations, the then Committee Chairman N R Ramesh had said that about 60,000 km stretch was dug up in Bengaluru to lay OFCs, of which at least 55,000 km were illegal. An additional 8,000 km length illegal overhead cables should be removed, he had stated.

Finally a draft for cables

Now the Urban Development Department has issued a draft policy to regulate optic fibres and all other cables in public places. The draft policy – the Karnataka Municipal Corporations (Regulation of cable laying) Rules, 2015 was published on January 14th, 2016. The month’s time for public and stakeholders to submit objections and suggestions is now over.

It will be interesting to see how the cable policy in its final form will be, given the money and burden involved in laying cables, and how the industry will react to it.

Concerned citizens came together at the Madiwala lake park on the occasion of World Water Day to discuss the state of the lake and water quality.

Many apartments in Bengaluru are rushing to install solar panels given the likelihood of change in rules soon. Rooftop solar systems have led to huge savings in their maintenance costs, apartment associations say.

BBMP commissioner defends the decision, says only 20 crores were released. BBMP is yet to pay 3000 crore pending bills.