Like it or not, most of either dread or experience discomfort at the thought of a visit to the police station. But what if you find yourself in a situation where you have to visit one to register that all important document – the FIR? Vigilance Director, and former DG/IGP of Karnataka, M D Singh answers our queries on the same.

What is an FIR?

The information about a cognizable offence given by a complainant and recorded in a prescribed format by the police is called a First Information Report (FIR). Under Indian law offences are divided into cognizable and non-cognizable by the Criminal Procedure Code (CPC), and an understanding of the distinction between the two is necessary. 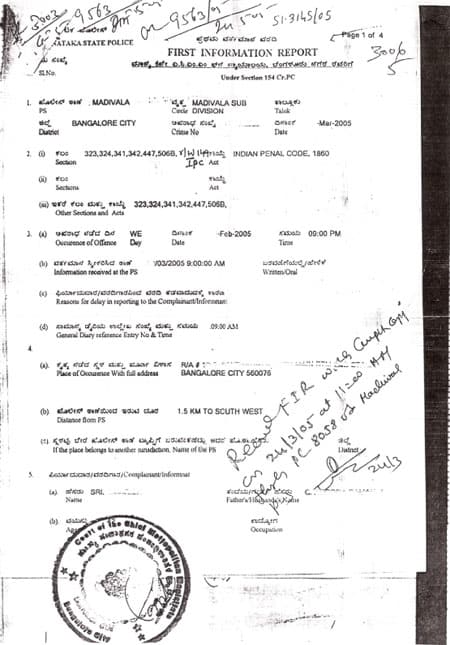 Scan of First page of an FIR

Cognizable offences are those offences for which a police officer can arrest the accused without a warrant. The complaint of any cognizable offence has to be registered as an FIR. The CPC itself contains an exhaustive list of all cognizable offences. Some examples include theft, dacoity, rioting, assault, rape, etc., while offences like assault with minor injuries, bigamy and adultery are non-cognizable and do not merit an FIR.

But an FIR can be registered for a non-cognizable case if the offence occurs in the presence of the police officer or if the complainant approaches the court and takes its permission to lodge an FIR.

Who can lodge an FIR?

An officer in-charge of a police station may also register an FIR suo moto (on his own initiative) if a cognizable offence is committed in his presence. A complaint received on the telephone can become a precursor to an FIR after being verified by the police officer and getting the signature of the complainant.

How is an FIR lodged?

Who registers the FIR?

FIR in a cognizable offence has to be registered by a Sub-Inspector and in his absence by the senior most official in the police station. The sub-inspector has to investigate the complaint himself or record the reasons why he deputed someone else. In every police station it is the writer, who is of the rank of a sub-inspector who records an FIR.

What is recorded in the FIR?

The following details are recorded:
• The date and hour of occurrence of offence – (or approximate time and dates)
• Date and hour when reported
• Place of occurrence, its distance from police station
• Name and address of the complainant
• Name and address of the accused
• A brief description of the actual offence
• Details of property stolen in case of theft
• Section of law which applies to the offence
• Signature of the complainant on all pages

What are the duties of a police official with regard to recording of FIRs?

It needs to be emphasised that a police officer is duty bound to register an FIR if a crime has been committed. Further there should be no time lag between receipt of information about a crime and the recording of it. The Karnataka Police Manual clearly says the police official should not wait until he has checked the authenticity of the complaint, nor should he wait for the medical report. Don’t even embark on a preliminary enquiry, record an FIR at once, it instructs. The police official has to record all important facts in the FIR. He is also instructed to record the FIR in the actual words of the informant to avoid interpretation. Once an FIR is recorded the official has to read and explain it to the complainant and take his sign.

An FIR once recorded cannot be withheld or cancelled by the Station House Officer (SHO) under any circumstances.

What are the rights of a complainant with regard to an FIR?

Once the FIR is registered the complainant has a right to receive a copy free of cost then and there. No confession or complaint made before the police can be used in a court of law. This is done to prevent misuse of their office. The complainant can change his/her saying given in the FIR but has to explain the reasons for doing so in court. Another injunction is that there cannot be more than one FIR in one case no matter how many crimes have been committed. This means there can only be one version of the offence.

What happens after an FIR is recorded?

Immediately after recording the police officer investigates the incident forthwith. He goes to the place of inquiry without delay and collects evidence from the scene which could be material or photos and statement of the witnesses. The investigating officer has to give a report to the magistrate on the FIR within 60 days (if the prescribed punishment for the offence committed under law is less than 7 years) or within 90 days (if the punishment is more than 7 years). Once an FIR is lodged, four copies are made. While the original is dispatched immediately to the magistrate having jurisdiction, one copy is retained by the police station and one copy is sent to the Superintendent of Police and another to the immediate superior officer, usually the Circle Inspector.

Why is the FIR an important document in a criminal case?

The FIR is admissible as evidence in court which is why it is a very important document. The Karnataka Police manual says “It is the earliest record made of the alleged offence before there is time for its particulars to be embellished or forgotten. It can be used to corroborate or impeach the testimony of the person lodging it under the Indian Evidence Act. The necessity of drawing up this document with the utmost care and accuracy and with all available details cannot therefore be over emphasised”.

Why is delay in registering FIR harmful?

Once a crime is committed, the earlier an FIR registered, more the chances of it being untainted, given without deliberation or interpretation. While registering an FIR even a slight delay can be harmful. Because delay may lead to more versions cropping up, facts are likely to be vitiated. The delay in filing FIR may be exploited by the defense.

In some offences like rape, delay in registering FIR is not held against the complainant as it is understandable.

What can I do if the police refuse to register an FIR?

In practice, why is registering an FIR the most difficult thing to do?

“If you want to register an FIR for a petty theft the police discourages you, they openly tell you that object won’t be recovered” says Aarthi, a student who tried unsuccessfully to file a complaint after her mobile was stolen.

Rajlakshmi, a practising lawyer, explains the way in which the police accept bribes for registering FIR. She says, “There are different rates for registering FIR’s, for a petty offence you may be charged Rs.500, if your vehicle has been involved in a accident the charge maybe Rs.2000 and if you want to show extensive damages Rs.4000. In dowry harassment cases the rates go upto Rs.10,000”.

Singh admits that there is reluctance on the part of the police to register FIR’s. “Every SHO wants to give the impression to his superiors that his station is ram rajya”, he says. “If they register all cases the crime rate will be seen as skyrocketing. The SHO does not want to be pulled up by his superiors for being inefficient”.

A solution in sight?

The recent Supreme Court (SC) directive urging the police to register FIR’s promptly was an attempt to address this problem. Senior criminal lawyer C V Sudheendra says that this is nothing new. As far back as 1979 in the Ganesh B Patil vs State of Maharastra case, the SC stressed upon the importance of recording FIR’s without any delay. “But the SC can’t police, it only rules”, says Sudheendra, “the change has to come from within”.

Singh feels that if all police stations in the country register FIRs promptly the crime rate will go up. Again if you register more FIR’s that many cases will have to be investigated, courts will be flooded with cases. A jump in the (recorded) crime rate will be met with concern from society, press and lawmakers. Therefore a change of mindset is needed first.

Policemen have to be given clear cut instructions to register cases freely and investigate sincerely without being unduly concerned about detection. “More than anything, persistence of citizens can bring a big change”, says Singh. “If you report all crimes and insist on your rights a lot can change”.

About Priya Mulgund Revankar 3 Articles
The author has not yet added any personal or biographical info to her or his author profile.

Khata confusion for Whitefield properties: What’s wrong and why?

If you are a resident of Whitefield or the one who is aspiring to buy a property in Whitefield, this might matter to you: What causes confusion in Khata documents related to Whitefield’s properties?