“This Dusshera, my aim is to try and ease Bangalore’s hunger problem.” So begins Mahita Fernandez’ post on the Facebook group “Feed Your Neighbour”. 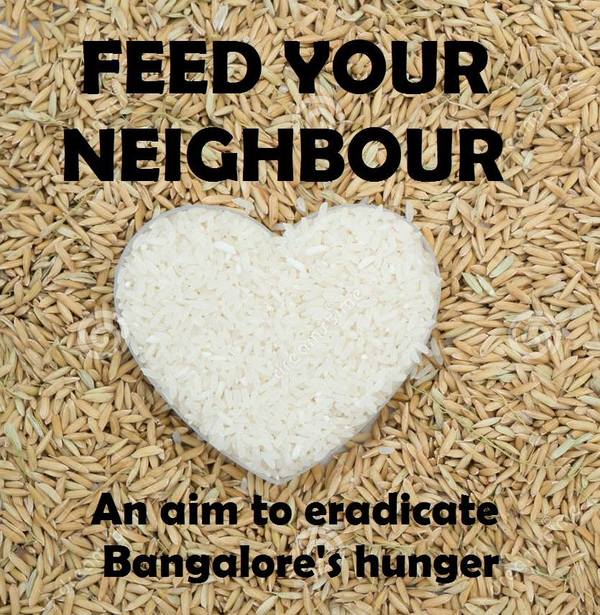 The idea for the initiative, Feed Your Neighbour (FYN), came to Mahita in the wee hours of a night when she woke up hungry. She says, “I woke up with a rumbling stomach around 3 am and felt thankful that I had food to eat. I then thought about the thousands in the city who are probably hungry and have nothing to eat. The very next morning, I put down the idea on paper and created the group to reach out to people.”  The Facebook group has since been joined by over 1,300 people.

Through the FYN initiative, Mahita aims to mobilise the community to cook and share food with the homeless and hungry in Bengaluru. The initiative, which will run from October 12th to 22nd, hopes to rally a minimum of 2,000 people who are willing to cook five extra meals each day. The food will then be distributed to the needy. This would also mean that across the eleven-day period, the initiative will have ensured that 1 lakh people do not go to bed on an empty  stomach.

How does Feed Your Neighbour work?

While the FYN initiative primarily aims to do its part to ease Bengaluru’s hunger problem, it also hopes to build a sense of community among Bengalureans by giving them an opportunity to make a difference to the lives of those in need, via a ripple effect.

The initiative is simple – those interested in participating are required to cook a minimum of five meals which they will have to drop off at a particular point in their neighbourhood. From here, volunteers will pick up the food and deliver them to the homeless and hungry.

Mahita says that so far, around 900 people have agreed to provide food, and 75 others have signed up as volunteers to distribute the food. She is also looking for more volunteers to identify distribution points, and actually pick up and drop off the food. In addition, she is also looking for coordinators who can help with liaising with the volunteers, verifying the distribution points etc. More details on this can be found here.

For those interested in being a part of the FYN initiative, here’s how you can get on board.

Those people who are neither able to cook nor volunteer their time, but wish to be a part of the FYN initiative, can do so by donating money or by spreading the word. The funds collected will be used to purchase packing material, hire transportation for the pickup and distribution of food, etc. Mahita adds that if there is any excess money remaining after October 22nd, she will continue to distribute food to the needy till the money runs out.

How will the logistics be managed?

In addition to mobilising the community to cook, Mahita is also currently working with volunteers to identify areas where the food can be distributed. Most of the food that is collected from a particular neighbourhood, will be distributed in that neighbourhood itself. Mahita clarifies, “There are some areas like MG road and Lavelle road from where people want to donate food.  However, these areas do not have a proliferation of the homeless. We’re planning to distribute the food collected from such areas, elsewhere.”

She also adds that while most of the food will be distributed to people on the streets, homes for the destitute, beggars’ homes, slums etc are also being looked at. She mentions how one of the volunteers suggested a colony of Metro workers in South Bengaluru as one of the distribution points.

Ask her why she has targeted dinner time, and she responds, “Most volunteers are likely to be busy during the day with their jobs and home chores. Considering we are rolling this out during Dussehra, pujas even. Also, many of the people who we are distributing the food to are possibly employed, whether they are daily wage labourers or beggars. Dinner time is probably the most convenient for both our volunteers, and the people who we are looking to help out.”

Food to be packed in eco-friendly material

Mahita says that as far as possible, people are being handed eco-friendly material to pack the food. “We are looking at giving out the food in boxes made from cardboard or other recyclable material,” she says. “However, there are some darshinis who have also agreed to send food. We can inform them, but we don’t really have control over what kind of packing material they will use.”

In addition, at the time of distributing the food, volunteers are being asked to inform the people who come to collect the food to dispose of the waste responsibly. She hopes that educating them about this aspect will also sensitise them about proper waste management in the long run.

Mahita also believes that it is unlikely that there will be excess food. She says, “No matter how many people volunteer, the number of people who can do with a good meal will always be more. So we will ensure that the food reaches as many people as possible.”

She also expects that the number of people who come to collect the food is bound to increase over the ten days, as word gets out. Should this happen, she is in talks with caterers and darshinis who can help supply the additional food at subsidised costs.

To know more about the Feed Your Neighbour initiative and be a part of it, click here. You can also have a look at the FAQs doc that Mahita has put together below.

So that’s your opportunity to make a difference in a small way, by cooking a couple of extra meals and feeding someone in need.

Helping the homeless and needy in Bengaluru
Give away that excess food to the needy in Bangalore!

In these 10 years, I’ve done my work neatly: BN Vijayakumar

BN Vijayakumar spoke about his work in Jayanagar constituency, the sad story of waste composting in Jayanagar, cycle lanes, public transport and more, in an interview done a week before he died.

‘It is your fight. Take the initiative’

Domestic workers are often clueless on legal aid available to them at times of crisis. The meet was organised to help them understand what can be done.

A Koramangala group where members discuss their aspirations, goals, doubts etc. about any topic that concerns them.