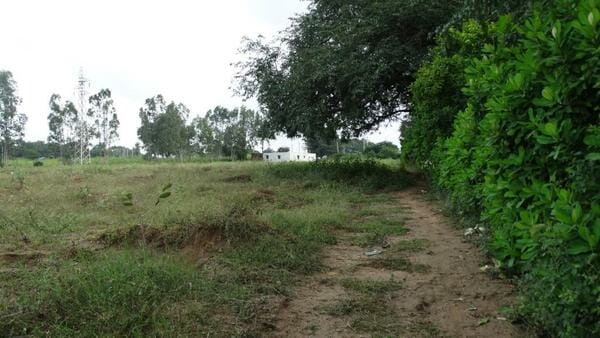 March 22, 2016. No sign of good rains in near future. A farmer, Chandrashekharaiah, who has some land near Hesaraghatta, is worried about what he can do on his land, to reduce his water needs and get better returns. He used to grow paddy, millets and vegetables earlier. Now he is not concerned about food crops, because the effort and labour required is more than what he can earn from it. And he does not want to end up becoming yet another farmer who could not repay his loans. He is thinking of putting marigold in the land, which is a good cash crop in any season.

Cut back to a hot afternoon in Bengaluru, on March 3, 2016. Messages of a huge traffic jam due to a farmer’s protest went viral over social networks like WhatsApp and Facebook. Many people missed their flights, and thousands were stranded in traffic. The reason was a huge farmers protest.

What went wrong? Why did the farmers protest? 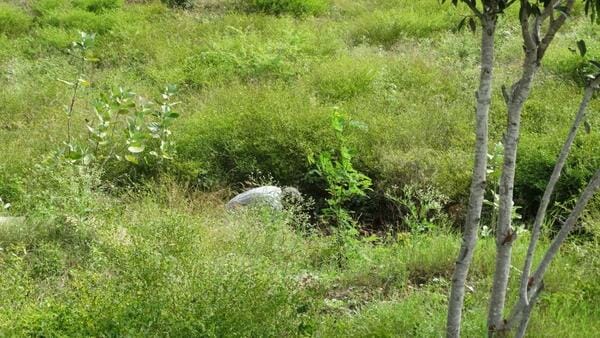 Water is hard to come by, in agriculture areas of Kolar district. The ponds and wells that provide some water dry up in summer. Pic: Shree D N

How did traffic jams occur?

On March 2, Karnataka Rajya Raitha Sangha president Kodihalli Chandrashekhar made an announcement that more than 10000 farmers will lay siege to Vidhana Soudha in Bengaluru the next day, March 3, 2016. This was supposed to be a public protest not affiliated to any political party or organisation.

The plan was to start the procession from Freedom Park to reach Vidhana Soudha. As the assembly sessions were in progress the protest was sure to attract the eyeballs of the lawmakers towards problems of farmers. Sugar cane farmers from Mandya were already protesting in Freedom Park that day.

Farmers in Kolar and Chikballapur districts decided to join the protest. Around 250 farmers decided to come to Bengaluru on their tractors and lay siege to Vidhana Soudha.

The government and police already had information on the protest. On March 2, Bengaluru City Police had issued an advisory banning the movement of lorries and tractors inside the city, other than those coming to RMC Yard in Yeshwanthpur. They also requested public to avoid roads leading to Anandrao Circle and Vidhana Soudha.

As per the police directions, the farmers were not supposed to bring the tractors beyond Devanahalli, but they refused to oblige, as there was no alternative transport they could use. Sources say farmers were asked to park the tractors in Palace Grounds and then go to Vidhana Soudha, but they didn’t agree. They reached Windsor Manor, where barricades were placed, stopping further movement of vehicles. There was also a small altercation between police and the protesters, leading to a confrontation.

This episode led to a huge traffic backlog overall, leading to jams in North Bengaluru area. And this was how the farmers’ protest caught the attention of the city-dwellers too.

Farmers face different issues, depending on what they grow. However some common issues troubling farmers in Karnataka are:

Minimum support price for the agriculture products: Some crops such as sugarcane, toor dal and paddy are bought for petty amount from the farmers, but the end product that reaches the customer is priced very high.

Farmers do not get the price benefit. Also, the cost involved in producing a particular agricultural product cannot be recovered below a certain price. If farmers sell the product below this price, farmers end up incurring loss, and won’t be able to any profits required to run their families and repay the debts.

To stop this, the government ensures stability in prices, by fixing a minimum support price (MSP) for each product, like paddy, toor dal, wheat, sugarcane. This ensures that the farmer is safe from the market price fluctuations and lobbies that interfere with pricing. Vegetables are not covered under minimum support price schemes.

Drought compensation for farmers: Almost all agricultural products are heavily dependent on water. Around 130 taluks in 26 districts of Karnataka have been suffering from severe drought this year. So farmers are unable to grow anything, as there is no irrigation scheme in these areas. Hence farmer leaders are demanding that government pay drought compensation.

Farmer distress leading to suicides: The unpaid debt and the surrounding problems have driven many farmers to commit suicide. According to a Deccan Chronicle report, 1002 farmers committed suicide in Karnataka in last financial year, from April 1, 2015 to January 11, 2016. The families of these farmers are left in lurch. The one-time compensation paid to such families is not enough to last long, and they dive deep into a cycle of debt and misery.

Demand for permanent irrigation projects: Kolar and Chikkaballapur districts receive 748 mm of rain per annum on an average, while Bengaluru gets 867 mm rains. Farmers managed seasonal crops like vegetables using groundwater, as well as rainfed crops like millets earlier. With water tables now down to 1600 feet, farming is becoming unviable.

In addition, even the available groundwater is not potable due to excess fluoride content. People in rural areas too are demanding clean and safe drinking water.

Government control over usage of water: The untimely rains in the month of November 2015 offered great respite to Kolar district, by filling the rivers and tanks in the area. Farmers were happy to see good rain after seven years of drought. However, the District Administration issued a direction asking the farmers not to use the water for irrigating agricultural land, as they wanted the groundwater to replenish. This angered the farmers.

While government controlling the tanks is fine, farmers feel their traditional knowledge is not valued. The water left in the tank will get evaporated in the scorching sun without benefiting anyone, and will not help recharge groundwater because the terrain is rocky and doesn’t let water permeation, hence farmers asked the government to release water from tanks. 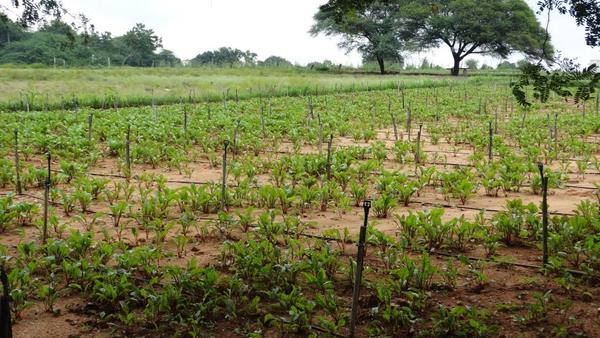 What is the government doing to solve water issues?

The government is thinking of providing a permanent solution for the water problems of Kolar and Chikkaballapur, through the Ettinahole project. The plan is to get 24 TMC water from Ettinahole in Western Ghats, by pumping it from the tributaries of the river Netravati. Of this, 7 TMCs of water will reach Kolar and Chikballapur.

However, this has been termed as unscientific and unachievable by the protesters in South Canara district, who are dependent on Netravati river for agriculture and irrigation purposes.

Farmers across India are suffering in various ways, with almost same problems. Agrarian crisis is looming large on the rural areas of Karnataka, reasons being many. Some reasons being:

Says Chandrasekharaiah: “Who cares for farmers? It is small farmers who grow food and help feed the stomachs, but big farmers only pose in protests. No one cares for people like us.”

Chandrashekharaiah was growing vegetables, rice and millet. Due to lack of good price in the market for tomato, he has shifted to growing marigold in one portion of his land. He says that while he gets Rs 50 for a 15 kg tomato box, the same is sold in Bengaluru for Rs 20 per kg or more depending on the rate for the day and where it is sold.

The price paid to farmers is not uniform across the districts, though the effort is the same.  For example, Kolar-Chikballapur belt supplies vegetables and horticulture crops to Bengaluru. While Tomato was available for Rs 10 a kg in Bengaluru markets, Ramachandra, a farmer from Chintamani district got a price of Rs 25 per a 10 kg box – Rs 2.5/kg. 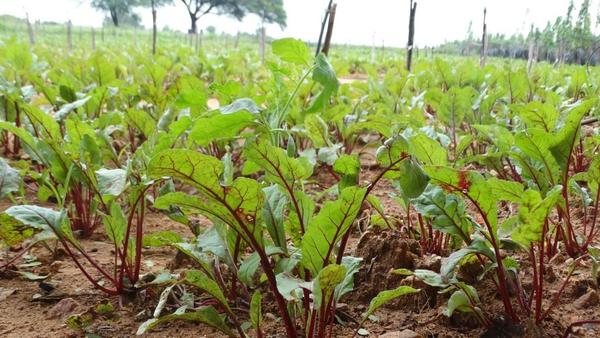 The vegetables supplied to Bengaluru are always under market pressure, and the farmer has no guarantee of getting his investment back. Pic: Shree D N

What are the problems from the govt’s side?

Currently, government support seems poor. There are helplines for the name’s sake, but they don’t work.

A call made to the Raita Mitra helpline (1800-425-3553) made at around 12 noon and  5.45 pm on weekdays to understand how the agriculture department helps farmers in distress were not answered. A call made to the Kisan call centre 1800-180-1551 was kept on hold for 1 minute 45 seconds and then got disconnected!

Even in the cases where the phone is answered, the “experts” on the other side are not really experts. They do not know how to deal with the questions and give the answers that make sense.  The officials in agriculture departments, according to Chandrashekaraiah, are not helpful. Whatever the farmers do is based on their traditional knowledge and wisdom, not from the scientific knowledge shared by any agriculture department.

Krishnamurthy Srinath, a teleserial artist and writer, gives the example of a group of engineering students who developed a system to forecast the prices of farm products. They informed Krishi Vigyana Kendra in Hassan, but there was no interest shown by anyone in developing or using it. Such is the apathy shown by the government towards innovation.

Chandrasekharaiah says that the government schemes favour big farmers or those with political clout. Insurances and the loan waivers have their own share of cuts going to middlemen too. With all these problems and no guidance or help, the farmers are forced to go for chemical fertilisers to increase yield and income. 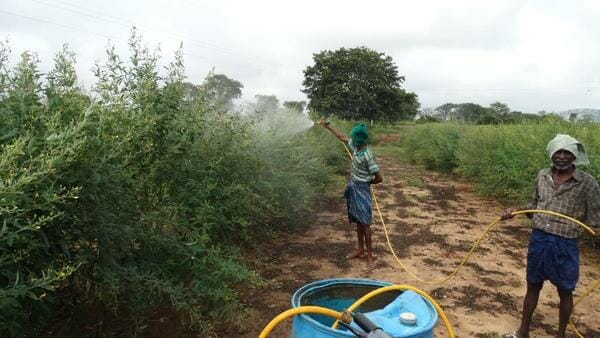 In the absence of sustainable mechanisms, farmers go for pesticides to save their crop. Pic: Shree D N

What can govt do to support farmers?

Anantha Sayanan, a social entrepreneur working directly with farmers in Tamil Nadu, suggests the following measures for the government to help farmers.

Additionally, the government needs to make the helplines more functional, systems more efficient in addressing the problems and involve people and communities in the decision making and understanding their needs.

Krishnamurthy Srinath has another suggestion: Create a corporation or an agency with at least Rs 50,000 crore as the capital. Open branches in all the 5560+ tehsils and provide Rs 1 crore to each branch, to start with. This corporation will buy the vegetables from the farmers at a fixed price.

What can people in cities do to help?

Subeesh S is a social entrepreneur working on waste disposal and clean energy, residing in Sarjapur. He is working out n a model where people interested in buying organic vegetables can pre-book their vegetable supplies and commit to purchase certain amount of vegetables periodically. This concept is called ‘Family farmer.’

The farmer needs to put in more efforts to grow chemical-free food, hence the vegetables will cost more than the market price of non-organic vegetables. However it will be direct-from-farmer and will cost less than the organic vegetable sold in malls and other shops. There will also be a trust quotient established between the buyers and the farmer. The plan also involves supplying segregated organic waste to the farmer. 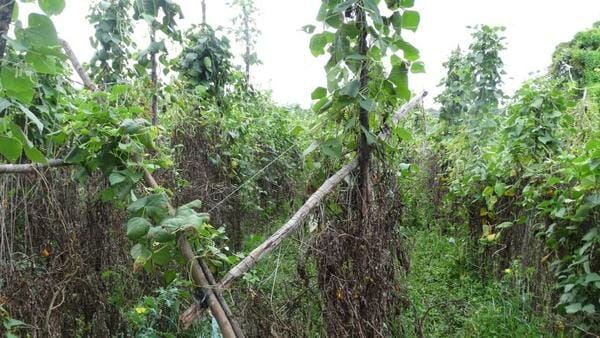 Subeesh says that this model is working in Thiruvananthapuram, the capital of Kerala. There, women self help group workers collect segregated green waste from every house, and the waste is sent to a farmer’s place. The farmer composts it and produces fertiliser, which he uses to grow vegetables and food crops. The farmer here gets the raw material to produce organic fertiliser for free, which reduces his burden of buying organic manure or chemical fertilisers.

Right from sustainable practice to farmers income guarantee to creation and facilitation of local friendly markets, people in cities can play a positive role. These are based on the inputs from the people to whom we spoke to.

Did you like this article? Help us publish more such articles. Support Oorvani Foundation!
About Shree D N 88 Articles
Shree D N was an Associate Editor with Citizen Matters. She believes good journalism can change the world for better.
Website Twitter LinkedIn