A 60-day window is open for the public to participate in giving comments to Bengaluru’s draft Revised Masterplan (RMP) 2031. The legally required participation acknowledges that the public has knowledge and that sharing is essential to bring about a plan viable for all. While citizens now are trying to read through monumental 6 volumes of plan material to give their inputs, government’s effort to equip citizen with planning literacy is inadequate.

Environment Support Group (ESG) conducted a workshop on: “How to…understand and comment on the Revised Draft Masterplan 2031 for Bengaluru” in which the above concerns were addressed.

During the workshop, one of the facilitators asked: Who plans the city? The responses were ranging from planners, consultants, bureaucrats, politicians, to industrialists. While citizens of the city had gathered to learn « how to » understand and comment on the revised Masterplan (RMP) 2031, the workshop participants were surprised to learn that they had a key role in envisioning, conceptualising and formulating plans for their city. This was no charitable exercise, but a constitutional right. This reveals to which extent the public has got used believing that the parastatal agency, the Bangalore Development Authority (BDA) – void of people’s representation, is mandated to plan Bengaluru in a top-down manner along with their appointed consultants.

Yes, it is a matter of faith! The colonially inspired Karnataka Town and Country Planning (KTCP) Act 1961 in fact envisages a central role for citizen participation in shaping their city and that by instituting public involvement in four stages of plan-making. The Constitutional 74th Amendment (Nagarpalika) Act (1992) prescribes in Article 243ZE that the Metropolitan Planning Committee (MPC) is to prepare a draft development plan for the city. It accounts for the plans prepared by the municipalities and the panchayats in the Metropolitan area, coordinates spatial planning and integrates development of infrastructure, environmental conservation, sharing of water and natural resource and economic and social planning. 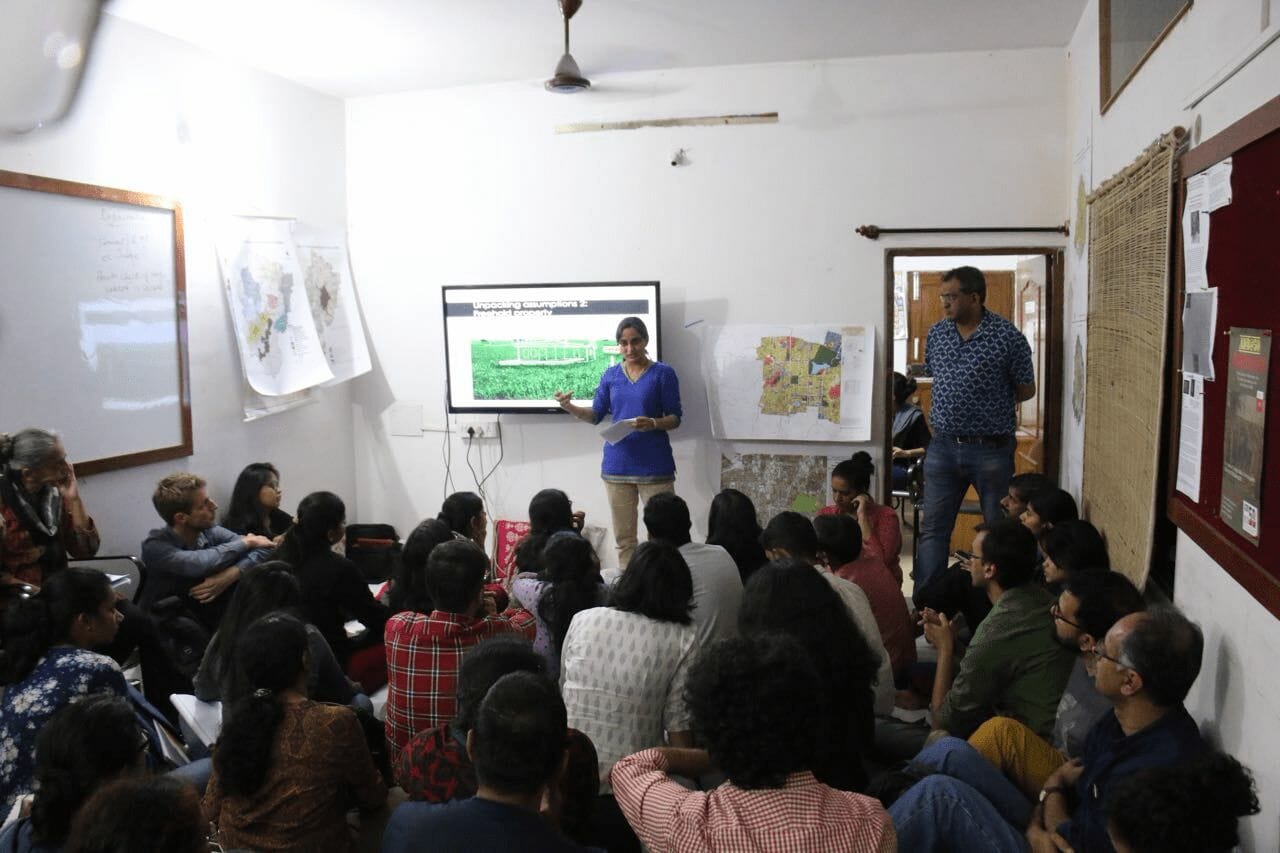 Citizen-driven planning means reclaiming cities for people and not for profit. Currently in Bangalore, capital is the most powerful planner. So powerful that it creates sanctuaries for empty lying luxury apartments, while an estimated 25-35% of the population live in inadequate housing situations. Capital gulps up public spaces as collaterals for bank loans and invites foreign investors to park their money in large infrastructure projects, only to pull out at the most profitable moment facilitated through cunning amendments of urban and financial policy.

To contextualise these two possibilities, four speakers shared their expertise with a jam-packed audience at the ESG workshop space in Banashankari II stage. Leo F. Saldanha of ESG outlined the legal process in presenting planning provisions across the Indian Constitution, the KTPC act 1961 and the Karnataka Municipal Corporation Act 1976. He argued that a bottom-up planning approach was engrained within this legal framework and that the BDA’s Draft plan was hence legally not legitimate. He further brought attention to the 25 years of constant struggle involving protests and litigations, which this year resulted in the High Court of Karnataka directing in W.P. 46523/2012 (Environment Support Group & Ors v. Bruhat Bengaluru Mahanagara Palike and Ors) to make functional the Constitutionally mandated Ward Committees. In Bangalore, today we have 198 Ward Committees who should be the node to equip citizens with planning literacy and to gather urban visions for their ward. Their plans shall further be aggregated at BBMP-level and co-ordinated by the Metropolitan Planning Committee in a democratic manner. However none of this has been complied with in the current plan.

Within such a problematic planning practice, Brinda Sastry, consultant urban planner and adjunct faculty at RV college of Architecture, articulated the nestedness of the plans and explained how to interpret and concretely comment on the plan, which would be blueprint for future development. She taught the participants to read the maps in a contextual manner, to understand the phasing of the masterplan and visualised the 42 planning districts within their respective planning zones (A, B, C). To understand future developments of a ward, one has to

The critical eye of the citizen is crucial to identifying inconsistencies between the vision, proposal and implementation of the plan, point at mapping errors (existing and proposed land use), comment on the planning process, the sector analysis and the stages of communication, implementation, monitoring and evaluation.

To comment on the process of planning the public requires to be instilled with alternative imaginations about the planning process and the city. The following two facilitators’ aim was to communicate to the audience that master-planning, the way we know it, is old school and that alternative practices are available. Countries like the UK, Holland, South Africa and Brazil have gone beyond the grand plan and have adopted more responsive and flexible instruments that are more strategic in intent and reflective of current trends of urbanization.

The Dutch experience of planning, presented by Martjin Rauwers, a Dutch planning expert, informed how prioritising water-security and regional integration of cities is a valuable lesson for Bangalore. He articulated the permanent threat of dikes breaking and the North Sea ravaging human settlements in the Netherlands. In the re-invention of the planning system, this challenge has been turned into a strength. Controlled regular flooding has turned the Netherlands into the 2nd largest food exporter in the world. The Water boards of the Netherlands are the oldest government bodies and excercise great influence on planning cities. Through them cities and countryside are strongly linked.

Urban sociologist, Dr. Swetha Rao Dhananka aimed at unpacking certain underlying assumptions of master-planning to display its inadequacy for the current reality of Bangalore’s city-scape where, 80% of the structures stand in violations of laws and regulations. Further, she problematized the idea of free-hold property and explained the relations between infrastructure servicing and financialisation of land to the detriment of public interest. To nurture the public’s imagination for planning alternatives, she gave an overview of planning practices in the cities of the “North”, which are increasingly adopting strategic planning. This method formulates frameworks and broad principles instead of projecting land use plans for the entire city. This involves strategising certain areas with infrastructure development, housing and urban regeneration.

Examples from the “South” included the UN Urban Management Program, which attempted to mainstream planning into all departments of local governments. The integrated development planning system in South-Africa deviced the budget as a coordinating mechanism for spatial planning. While these approaches didn’t promote much of a participatory process, the Brazilian instruments of participatory budgeting and special zones of social interest evolved into planning practices from the bottom-up to revive the existing city. The Brazilian example enables the up-gradation of existing slum settlements, an approach not even contemplated by the current RMP 2031. The RMP 2031 dedicates insufficient attention to issues related to low-income groups. Where ever community planning is undertaken in Bangalore, it occurs in a very contested way, as it is not facilitated by the local government.

The evening closed with the screening of the film Our metropolis directed by Gautam Sonti and Usha Rao. A very nuanced film about Bangalore’s difficult journey to a world-class city. The facilitators problematised the commonly used attribute “world-class” in shaping cities. The discussion that followed considered the attributes of healthy, sustainable and inclusive as more relevant.

ESG will be regularly conducting future “how to do it” workshops for concerned citizens on a variety of topics relevant to creating a “city for people and not for profit.”

This is a press note sent by Dr.Swetha Rao Dhananka for Environment Support Group. Leo Saldanha co-authored this piece. This has been published here under ‘Message Forward’ section meant for nonprofit public interest messages.

After a delay of nearly 1.5 years, the underpass at the intersection of JP Nagar’s 15th cross Ring Road and 24th Main may be completed in a month’s time. Still, both the BBMP and the area MLA are not categorical about D-day.

Land registrations take place without actual surveys, which makes it easy for anyone to register anything. Having Unique Property Ownership Records is a possible solution to the mess, but it’s being opposed by the land mafia.

The expansion of BBMP has led to some Panchayat dispensaries in the city region being moved out and the buildings being turned into storage.