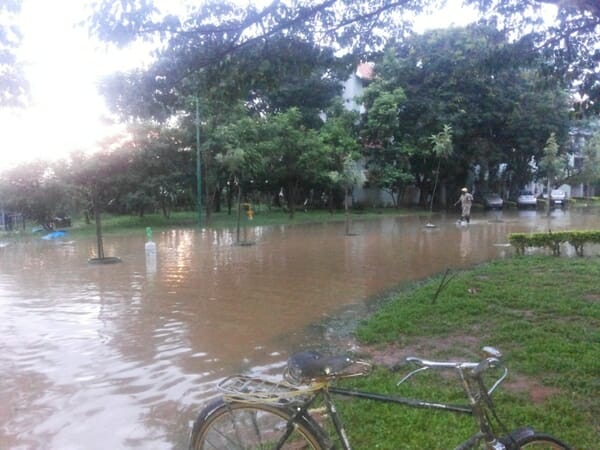 Water inside Sai Gardens premises, in Kadugodi near Whitefield.

The above picture isn’t a scene from any flooded village, it’s a scene straight from Kadugodi – Whitefield, Bangalore.

Residents of Sai Garden apartments, in Kadugodi near Whitefield, were in for a shocking scene on Friday. Continuous rains had filled the nearby canal, and the water level around the apartment complex started rising slowly. Water flooded into the apartment’s premises and entered the ground floor of the flats, thereby forcing residents to vacate.

The water level outside the compound walls of the residential complex rose to a height of 10 feet. With the help of two pumps, borrowed from nearby villagers, residents managed to keep the water level within the premises at 3 feet.

The residents tried reaching officials from BBMP, Disaster Management Cell and the fire department. “After a series of calls, we could reach the concerned person,” said a resident who didn’t want to be named.

The repeated calls by the residents to the officials did not yield a quick result. The Fire and Emergency team reached the spot in the evening only. Residents say that the Fire Department demanded money to help out.

President of Sai Garden Apartment Residents’ Association, Sampath Ramanujam says that BBMP engineers, Tahsildar and Panchayat officers arrived at the location but they had no idea what was to be done.

Later in the afternoon, there was another rain, and Sai Gardens saw another flood. The water level started increasing again. Seven pumps were used to pump the water out.

Twenty-four hours after this, the canal water continues to enter into the groundfloor flats of Sai Garden. The residents are worried about the future.

Neighbouring apartment associations have offered a helping hand to the residents of the apartment in question. Sai Garden complex has around four blocks and almost 460 units. Around 100 families living on the ground floor have been displaced. The apartment is said to be 15-year-old. 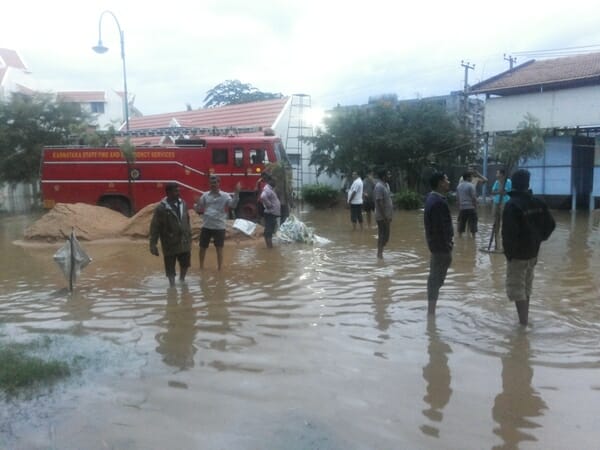 Fire service team and the residents struggling to pump out the water.

A recent construction that has come up on the drain nearby is said to be the cause. Recklessly dumped garbage and landfills that have blocked the canal also have added to the problem, causing the water to flow towards the apartment complex.

The residents of Sai Gardens apartment say that filling up of canals with construction debris by land mafia blocked the easy flow of rainwater to Yellammana Kere, near Kadugodi lake. Since water had nowhere else to go, it overflowed and started entering the compound of Sai Gardens Apartments at 11 am.

Citizen Matters contacted BBMP Chief Engineer of Stormwater Drains, H C Ananthaswamy – he was unaware of the situation at Sai Gardens. He calls this situation a ‘Social Problem’ as people carelessly dump garbage and encroach canals meant for rainwater.

“Even if we clean the canals every month, such situations cannot be stopped unless and until people stop dumping their garbage and land mafias stop encroaching lands. We need to work collectively,” he adds. 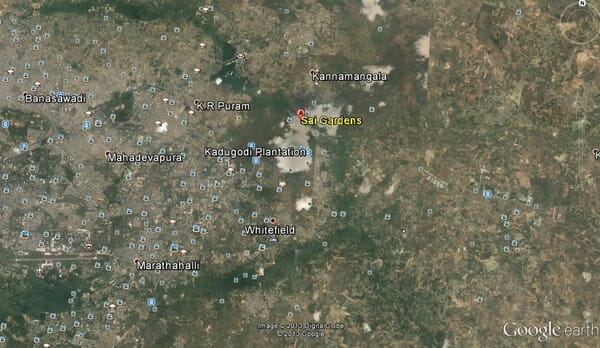 Encroachment of SWD by builders?

Ananathaswamy also refers to the Revised Master Plan 2015, which says a buffer zone of 50 metres is to be maintained between the building and primary (main) channel, 25 metres between secondary canals and 15 metres between tertiary channels. “Builders flout these rules and leave the residents to suffer,” he says.  A survey is being carried out to identify encroachment of water drains.

A Google Earth image (see above) shows the location of Sai Gardens apartment complex right next to the path of a natural drain that comes from Yelammana Kere or Medahalli Kere. However, the exact distance between the channel and the apartment has not been measured.

Incidentally, in April 2013, Jaideep Singh, a resident of Kadugodi, had forwarded the pictures of a creek getting filled by land mafia, in this very spot. “There are no markers on the extent of the creek width, hence there are chances of encroachment of creek land… The concern also is that during monsoon, the water in the creek swells up. If it does not have enough width, the road may get flooded and eventually develop potholes,” he had written.

That prediction has come true, in a much more serious manner. 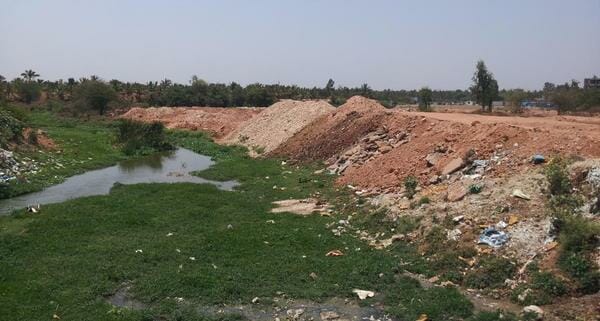 Reports say that there have been similar floods in the area earlier, in 2005 and 2008. The president of the association, Sampath Ramanujam is worried that if the situation turns grave, it might lead to collapse of the compound wall that stands right adjacent to the canal.

Anil Kumar, an RTI activist who has worked extensively on stormwater drains, has a different take. He says that in such situations, there is an immediate need to find a diversion channel at a lower point where the water could flow. Otherwise the problem will keep surfacing whenever there’s a heavy rain.

Anil Kumar draws attention to another long term, dangerous problem. If the water is at 10 feet, it means the area is really low-lying. If there has been no soil testing before construction, it can prove dangerous. Continuous percolation of water for long time over the area might lead to sinking of the soil inch by inch – which might lead to cracks on the foundation or the walls, and ultimately cause collapse of the building.

With inputs from Newsdesk.

HC pushes for restoration and rejuvenation of Agara and Bellandur lakes

The PIL filed by citizens of Bellandur and Koramangala along with Namma Bengaluru Foundation has reached a stage where builders are asked by the court to be involved in the discussions on maintaining lakes, in collaboration with citizens. Read the full report.