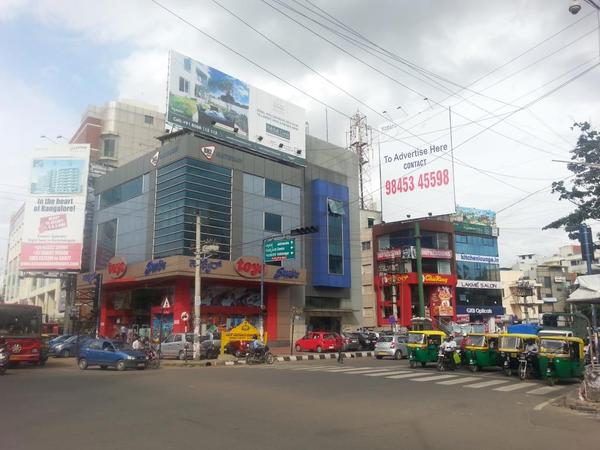 Driving from Electronic City to reach Indiranagar in Bengaluru is a nightmare on most evenings. A precious 20 minutes will be lost while waiting for your turn to cross the Sony World junction signal. BBMP has acknowledged this traffic issue and plans to build a 2.4-km elevated flyover from Ejipura junction to Kendriya Sadan to improve the situation.

Unlike most solutions devised by officials and consultants, this is one of the few projects initiated following public demand.

In 2011, BBMP had planned to construct a signal-free corridor – Agara to Sirsi Circle, via Lalbagh road. After residents of Koramangala protested the need to have grade separators along this road and pointed out the negative aspects, the Agara to Sirsi Circle project was scrapped.

Citizens proposed that an elevated corridor be built on the 100 feet road, Koramangala, that runs from Ejipura junction to Hosur Road. Vijayan Menon, member of the Citizen Action Forum and a resident of Koramangala says, “We told BBMP that the signal-free corridor is required on the East West corridor and not on North – South corridor, as the entire traffic from Indiranagar to reach Hosur road cuts through Koramangala.”

Menon says that the original plan of BBMP was to build just one flyover at Sony World junction. “It was the hard work of a lot of citizens that this project (has been designed) in a proper way,” he adds. The 30-month project was sanctioned by the Central government under Jawaharlal Nehru National Urban Renewal Mission (JNNURM) in February 2014, just before the elections.

Heavy traffic throughout the day

Cars coming from Indiranagar and Old Airport Road zoom on the Inner Ring Road till Ejipura – a stretch of 2.5 km in a matter of 10 minutes. Then the commuters’ nightmare begins, as they have to pass three signals: Ejipura Signal, Sony World Junction and Kendriya Sadan (Koramangala Water Tank) Junction.

The story is same for the commuters travelling from Electronic city to Indira Nagar. The Detailed Project Report highlights that during peak hours, i.e morning 9 am to 10 am and evening 6 pm to 7 pm, all three junctions will have the traffic density of more than 8,000 to 11,000 Passenger Cars per Unit (PCU). Throughout the day, the traffic density remains at higher than 5,000 PCU, thus making the junction heavily trafficked. 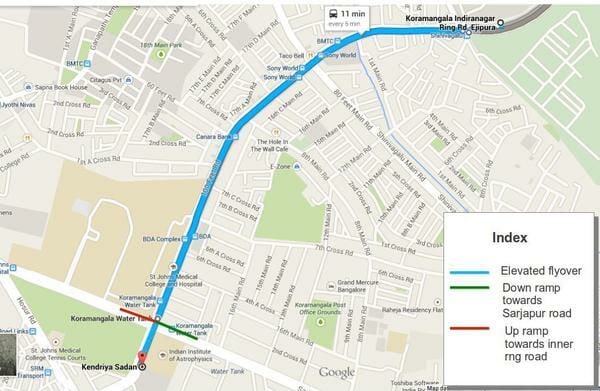 The route representation of the proposed elevated road from Sony World Junction to Kendriya Sadan.

Fly over the traffic

The 2.4-km long road will be bi-directional and will have four lanes. This will let the traffic cross the distance within 10 minutes. BBMP Executive Engineer of Roads and Infrastructure, Baswaraj Kabade says, “Once you hit the Inner Ring Road from Domlur, you needn’t stop anywhere till you reach the Kendriya Sadan.”

Nitin Seshadri, a resident of Koramangala and Member of Koramangala Task Force says, “There is no point in making small flyovers. It creates more traffic.” He continues, “The traffic heading towards Hosur road, Sarjapur road and Domlur, Indiranagar will fly atop without any traffic.”

According to the drawings, the flyover will have an exit-ramp for Sarjapur Road traffic on the left side towards Krupanidhi College, before Kendriya Sadan. On the right side, there will be an entry ramp for traffic going from St. John signal to Domlur, after St.Johns Hospital.

There is an entrance ramp planned on Sarjapur Road for traffic coming from the Hosur Road- Sarjapur Road junction to take the elevated road near St Johns Medical College. The Koramangala Task Force has proposed an alternative ramp location at 100-ft road itself so that traffic coming from Krupanidhi and Checkpost junction can take a turn into 100 ft road and then pick up the ramp.

The fate of every infrastructure project depends on how easily the land is acquired and utilities are shifted along with the number of trees that should be chopped. BBMP officials feel that the acquisition process will not be a problem as very little land is required, and whatever is required mostly belongs to the government.

“Only at places where the ramps go up and down (at Kendriya Sadan and at Ejipura junction) we will need land measuring approximately 2000 sq ft,” says an official. On both the ends of the flyover, the land belongs to the government. Hence Kabade believes that it won’t create much of a problem.

The DPR states that Rs. 61.8 crore will be required for land acquisition and utility shifting. The project is estimated to cost Rs.214 crore, including utility shifting. It is expected to complete in 30 months with six months for tender processing and the next 24 months for construction of the flyover.

The DPR projects cutting of as many as 286 trees on this road. To compensate, BBMP has made provision for an afforestation plan. The DPR states, “It has been observed with management plans consisting of planting of trees in the ratio of 1:2, proactive afforestation for green cover and development of green ribbon in and around the project area, it will be abundantly compensating the green cover.”

BWSSB trying to register all the borewells in Bangalore

BWSSB is getting people to register their borewells in March. Will this effort to monitor groundwater exploitation succeed before the aquifers runs dry?