On March 27, 2018, the Election Commission (EC) announced the dates of the Karnataka Assembly elections and Code of Conduct came into force. Since then, the police have seized cash, gold, vehicles and myriad freebies meant for distribution to the public by various party members. Be it the money offered by a party to the family of a dead worker, or the tradition of giving money to women who do Arathi, it is covered in the scope of the EC’s Code of Conduct, once the election is announced.

Is seizing materials meant for influencing the voter a new thing? No. In every election, the EC seizes such stuff, yet the practice continues. The value of stuff seized is increasing with every election.

This year Election Commission has increased MLA candidates’ campaign expense limit to 28 lakhs from 16 lakhs five years ago. But candidates are not supposed to lure voters through money or freebies, according to the law. Since freebies are not a part of their party work or campaigning in any way, the seized items do not fall within the expenditure that a candidate or a party is allowed. They are simply illegal.

Expenditure limit is only for candidate, not for party

What then is the point of the code of conduct, if its violation happens regularly?

“There is really nothing to be cynical about,” says an election official in Bengaluru. “By cracking the whip, we can at least limit, if not remove the illegal violation completely.”

It is no secret that each candidate spends almost Rs 5 to 6 crore on every election.

While the individual candidate’s expenditure is limited to Rs 28 Lakhs, their party’s expenditure has no limits, points out Sridhar Pabbisetty of Namma Bengaluru Foundation. “If a star campaigner comes for campaigning for a candidate, it will be put on the party’s account. So can the candidate for his expenses. How, then, can there be a division?”

Many politicians were smart enough to figure out ways to work around these constraints. Many took up their freebie distribution work much before the election dates were announced.

In Malleshwaram constituency, many residents became the lucky recipients of bumper gifts. In February, one candidate aspiring to get ticket from a certain party, had his birthday. Posters were seen in many areas wishing the candidate. Next to it, there came up posters wishing another candidate, whose birthday also fell in February. The second candidate, who is on a much stronger ground politically, went a step ahead, and distributed cookers to people residents falling below poverty line (BPL), in public parks, by asking them to produce BPL card.

The ticket aspirant candidate started campaigning furiously in Srirampuram area since February, sending feelers inside the party and meeting citizen groups. His posters hung on electricity poles across Srirampuram. His people approached middle class and lower middle class women voters belonging to an upper caste, and gave silver pooja articles that might cost about 800-1000 rupees!

Meanwhile the other strong candidate from same party, who had much stronger grip over power didn’t want be left behind in the race. He had his people distribute sarees to every household, along with a Vishnu Sahasra Namam book, where his image and Yugadi wishes were printed on the cover. 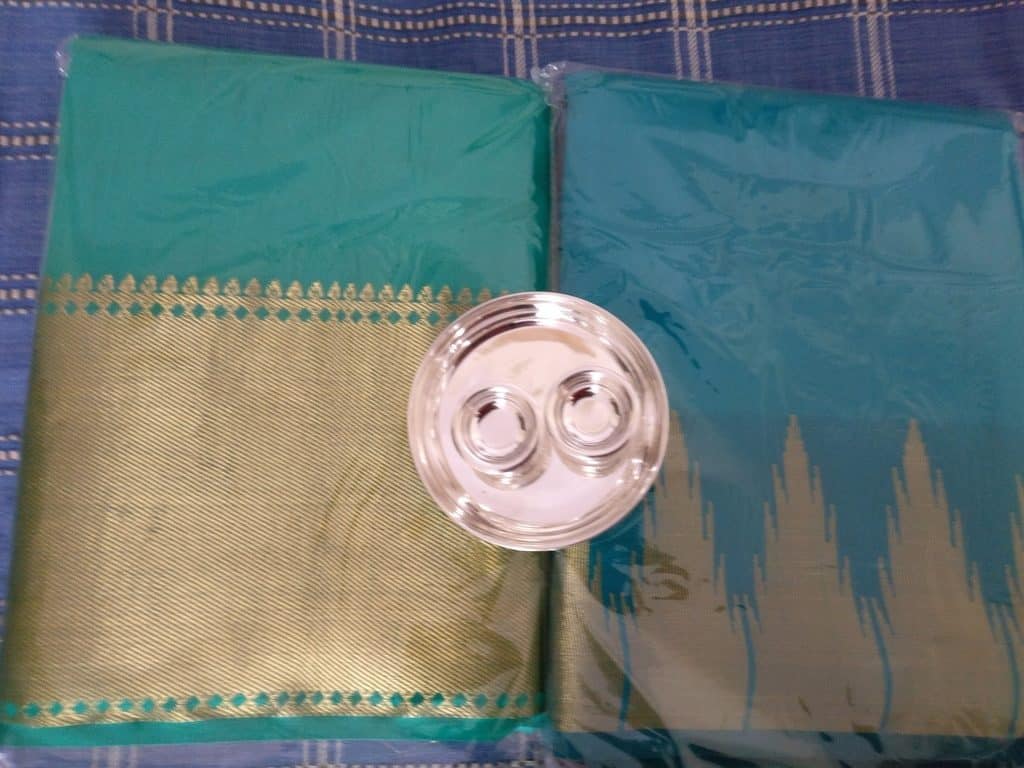 This article by The Hindu details many such instances of freebies getting distributed, by candidates of all parties, before election was announced.

Aren’t these punishable offenses under Model Code of Conduct? No. Because all of these took place BEFORE the election was announced and Model Code of Conduct came into being. The Vishnu Sahasra Namam book even had a date, 18-03-2018, the day of Yugadi, the new year day printed on it. What can stop a politician from wishing his people on a festival, after all? Yes, it didn’t happen every year or during every festival, but only in the election year, just before elections, but that’s not illegal at all!

How can citizens complain on violations?

For the cases that occurred after the election was declared, there is a complaint mechanism. Election Commission publishes helpline numbers for every assembly constituency before the election. Officials feel that parties are using the apathy of the public to subvert the system. “It is not possible to keep a tab on every move or act of the party workers,” admits the EC official.

There is also an app, ‘BBMP Directory GE’ on Google Playstore to get the numbers of nodal officials and expenditure observers working in all assembly constituencies. You can directly call them or text them, through the app from your number.

Study explores best practices to save electricity in Bengaluru’s apartments

Electricity alone contributes up to a quarter of the maintenance charges in apartments. Ten apartments participated in a study which came up with the list of interventions to reduce electricity usage.