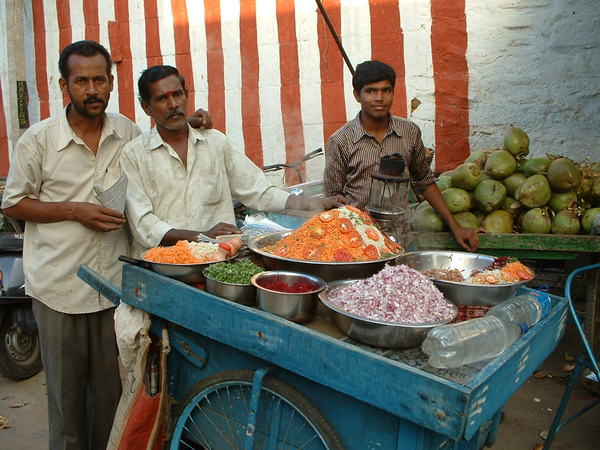 One of my favourite times in school was when the last bell rang… That’s when he used to walk in, pushing his cycle and finally parking it under the shade of a tree. No, I’m not referring to some hot hunk of a senior. I’m talking about the dhoti-wale uncle with his faded grey tin can of treats for the taste buds, who sold the best kachoris.

He would listen patiently to every child screaming out his preference and pull out a puri, fill it with onions, sweet, spicy or just mint chutney, along with a little curd, and top it off with a sprinkle of sev. Just thinking about that masterchef-like finesse still gets my mouth watering.

And here’s what the best part of Bengaluru. He is not the only one! Similar cycles or gaadis can be seen tottering across the city. Here a look at some of the best street food that Bengaluru has on offer.

A 100 metre walk down Kammanahalli Main Road and you’ll be surprised to find number of pani puri vendors. The pani puri walas are everywhere! This lane alone houses about seven of them. Though each one of them probably uses similar ingredients, the taste of the puri is different at every stall.

The stalls typically have a pile of puris stacked up like a globe, a matka (pot) of tamarind water, a large bowl of mashed potato, and a variety of masala powders. As customers surround the makeshift stall, they tell the vendor their preference—khara, meetha, a mix of both, more pani or less.

Some vendors serve the puris in a little steel dish, but most serve them in a tiny bowl, stitched together with leaves. While some wait patiently till you finish eating each puri, others just want to get done quickly so they can serve the next round of customers. After serving six to seven puris, they unfailing ask you if you want another round. When you think you’ve had your fill, they drop a tangy sukha puri into the bowl. And if they’re feeling particularly generous, they might give you two more. “On the house”, a pani puri wala once joked. Each round of puri generally costs between Rs 15 to Rs 30.

After their long stroll at Bugle Rock park in Basavanagudi, many walkers make their way to the chaat stalls in Gandhi Bazaar. While some prefer sitting out near the little shops that surround the park, many flock towards the age-old chaat shop on wheels.

Jayanna’s chaat shop has been around here for 15 now, prior to which he says he operated his cart for six years on Sampangi Road. This one-man cart is known for the different kinds of bhel puri, also called chur-muri, that it serves He claims that the most popular dish is the pineapple chaat, which many prefer.

The bhel consists of puffed rice, tossed with chopped tomato and onion, groundnuts (which he mentions is optional) and coriander, and a splash of various chutneys – sweet, tangy or spicy, according to the customer’s preference. He then makes a paper cone lined with a banana leaf, into which he fills the bhel. The banana leaf, he says, contributes its own essence to this tangy chaat. He also proudly proclaims himself the ‘king of chaats in this area’, and the crowd around his cart couldn’t agree more. The cost of one cone of bhel can vary from Rs 20 to Rs 30.

Other iconic chaat shops include Gullu’s in Seshadripuram, Shankar Bhel House in Frazer Town and Karnataka Bhel House (Basavanagudi, Vijay Nagar and Jayanagar), among others. If you’re feeling a little adventurous, you could try the Mexican chaat at RR’s Blue Mount in Vasant Nagar.

Bengalureans have always loved their dosas, whether they eat them at iconic restaurants like Brahmins or MTR, or at their local darshinis. Off late, the traditional dosa has been reinvented, and Bengalureans are lapping it up. 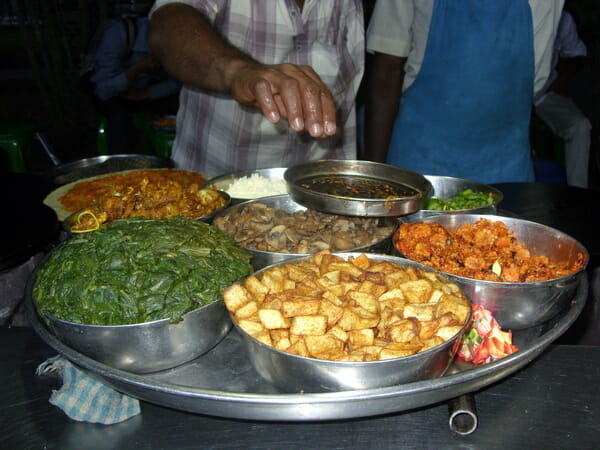 Customers can choose from a variety of fillings. Pic: Anisha Nair

The vendor starts off by spreading the batter with a little bowl instead of the ladle that we typically see being used at home. He then drops a dollop of butter over the batter, followed by the topping that you ask for. Once the batter has cooked, he folds the dosa, cuts it up to resemble pizza slices, and serves it on a steel plate. The dosas are usually served with mint or onion chutney.

If you are of the health conscious, calorie-counting kind, this is a place you might want to skip; if not, it’s one the best places to treat yourself. These carts can be found in Koramangala, Malleshwaram, Kammanahalli, Gandhi Bazaar (right next to Jayanna’s bhel-cart!), HSR Layout, and other parts of the city. The cost per plate starts from Rs 60.

If you live in Shantinagar or go to one of the schools or colleges nearby, you’ve obviously come across the momo sellers. They typically plonk themselves at the edge of a footpath with a tin steamer filled with hot momos. As you walk a little closer, the smell of garlic mixed with something that you can’t quite place your finger on, wafts across and surrounds you, making this a dish, impossible to refuse.

The menu is usually limited to chicken and vegetarian momos. While most vendors serve only steamed momos, some of them have fried ones on offer too. A plate usually has about seven to eight dumplings, that come with a serve of one or two dipping sauces.

Bharat, a vendor who has a stall near St Joseph’s College, is fondly referred to as ‘momo-man’ by the college students. He says, “Though most people eat here, many come here to take parcels too.”

Typically, the cost per plate is Rs 40 upwards for vegetarian and Rs 50 upwards for chicken. Other momo places worth visiting include Dolma’s in Kalyan Nagar, Taste of Tibet in Dubai Plaza, and Momo Hut in Koramangala. Do give the street-side momos a try too, they are not any less delicious!

If there’s a sandwich outlet that has been creating waves, it has to be Hari Super Sandwich. The sandwiches served at this chain of six restaurants, look quite ordinary – two slices of toasted bread, with a filling, and a slice of cheese.

What elevates them is the out-of-the-ordinary filling that goes into the sandwich. Some specialities include Cheese Corn Dahi toast, Gulkan sandwich and Chocolate sandwich. The sandwiches are cut into six tiny pieces and served hot on a shimmering steel plate. The cost per sandwich can vary from Rs 20 to Rs 40.

These are only a few among the many delights that you can find in Bengaluru. In your search for street food, you could very likely come across stalls that sell thattae idlis, jalebis, Ambur biryani and nalli soup too. Most streets in the city possibly have at least one or two little stalls that serve yummy food. So the next time you want to eat out, take a break from the comfort of restaurants, and try out the food that the little shack on the street has to offer.

Street food trend: Dosa fusion
How about a food street for Malleshwaram?
On the trail of Bengaluru’s food bloggers
Grow your food on your terrace!
Back to our roots, eating healthy

All you need to know about composting garden waste

Pit composting is perhaps the easiest way to dispose of garden waste – it takes minimal effort, and gives you high-quality manure for your garden. But what exactly happens in a compost pit? And how do you ensure the right conditions for composting? Here’s an explainer

Experiencing the true spirit of Xmas in Bangalore

Take a peek into some unique traditions of Christmas in the city. From churches to bakeries to homes, the true spirit of Christmas can be seen everywhere.

What began as one family’s passion has evolved into a community garden managed by residents of this Bellandur apartment.