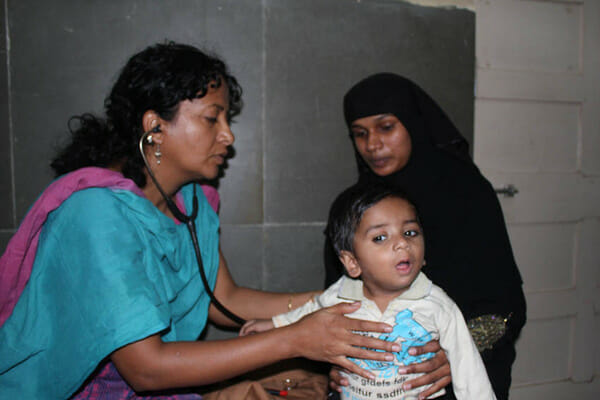 A team of doctors, students and activists gathered in DJ Halli on 4 August, 2013, to assess the extent of widespread malnutrition among the population. Following news reports about the death of five-and-a-half year old Meghala due to pneumonia compounded by severe malnutrition, the team decided to hold multiple public meetings in various gullies of DJ Halli off Modi Road, to understand the problem through interacting with the residents. Doctors in the team also checked children who were malnourished or suffering from related illnesses.

A number of complaints about the poor quality of health care at the Primary Health Center, turning away of pregnant women on the verge of delivery, demanding of cash prior to providing treatment etc. prompted the group to storm the DJ Halli PHC, which is supposed to be open 24-hours a day, only to find no doctor on site.

Medicine supply charts at the PHC showed no incoming medicines since the month of July, and several essential medicines such as ORS for diarrhea and Crocin for fever were absent. Only 42 of the 342 essential medicines were being supplied to the PHC. The PHC which caters to the entire population of over 1 lakh residents serves mostly as a maternity home, with no doctor present on site at night.

In effect, there is no public emergency medical center within even a 5-km distance for people living in DJ Halli. For such a large population, the government must provide an effective public hospital capable of handling emergency care, nutritive rehabilitation, and quality primary care free of cost.

For a democracy to be meaningful, the government must respond to all its citizens. For it to ignore the voices of those starving and dying due to lack of medical care constitutes criminal negligence. The absence of proper department-level attention and budgetary provisions devoted to health care resulting in an absentee public health system is unacceptable.
The health department must not respond to this in the usual governmental style of simply making life even more difficult than it is for the doctors and nurses who run the health center, but rather it should rework the structure of the Health Department to make it effective and accessible to the needy.
About News Desk 1160 Articles
The News Desk at Citizen Matters puts out Press Releases, notifications and curated information useful to the urban reader.
Website Facebook Instagram Twitter YouTube LinkedIn

In view of rising COVID cases in Bengaluru and other districts, Karnataka State Disaster Management Authority imposes restrictions to contain the virus.

Students from six Sanjay Nagar schools participated in the Walk to School event held on November 5th. The initiative encourages school children to be active, and in turn be more aware about their neighbourhood.

Can you use technology to solve garbage issues, disaster management, commercialisation in residential areas?