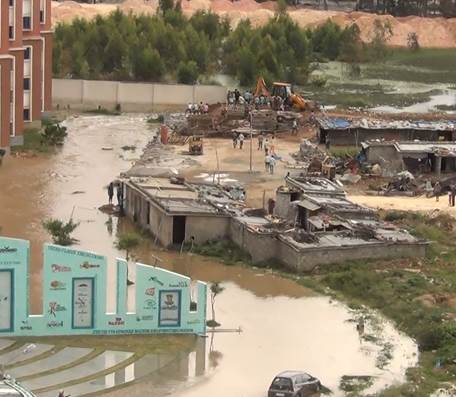 Flooding that took place at PES campus in Electronic City during August 2014. Pic: Sent by a reader.

While Chennai is recuperating from the torrential rains that wreaked havoc in the city last week, a question that stands before Bengalureans is: to what extent is our city prepared to handle such a situation?

Considering that Bengaluru is not immune to floods and 1,077 areas are flood-prone according to BBMP, we tried to know from various government agencies about their preparedness to handle a situation like that of Chennai flood. Here’s what came out of it.

Coordination is the key

Whenever a calamity occurs, most important of all, it demands a good coordination among various departments to quickly address the situation. News reports on what went wrong in tackling Chennai flood, point out at the poor coordination and communication between various government agencies. In Chennai, even as it rained heavily showing all signs of flooding, reportedly there was lack of communication, with various officials waiting for the approval from higher ups, and lack of interdepartmental coordination.

In Bengaluru, coordination of all the concerned departments including police, fire and safety, home guards, armed forces (in case of necessity), National Disaster Response Force, BWSSB, BESCOM etc is the task of the BBMP and Bengaluru Urban District Disaster Management Authority.

Each district has a disaster management authority chaired by the Deputy Commissioner, as per the Disaster Management Act, 2005. The Chairman of the Authority periodically convenes meetings of various departments and chalks out disaster management plan for the district.

Here is the role of five important agencies in handling disaster in Bengaluru and the their preparedness, according to the officials who head them. In case of a major calamity, these departments are expected to jump into action and take up emergency evacuation and relief work in coordination with National Disaster Response Force and armed forces.

For Bengaluru city, the nodal department to handle the emergency situation is BBMP. Disaster Management Cell monitors and assists BBMP in handling the situation.

K K Pradeep informed Citizen Matters that the Disaster Management Cell has the responsibility of providing training to officials and staff of various departments at regular intervals. These training programmes are organised in accordance with the standard operational procedures laid down by the National and State Disaster Management Plan.

Apart from training, the District Disaster Management Authority also conducts mock exercises. In 2013, a mock drill was carried out on urban flood at Bommanahalli, since it is a flood-prone area. A mock drill on evacuation during chemical disaster was organised only a few months ago at Electronic City.

“The BBMP will play a major role in tackling the emergency situation. The Disaster Management Cell will guide and help the BBMP by pressing into service National Disaster Response Force, if the need arises,” the Liaison Officer said. However, it should be noted that Karnataka continues to lack a State Disaster Response Force, even after the government declaring to have one, two years ago.

On asked about how people should respond during the calamity and whom should they contact seeking help, the officer said that the District Disaster Management Cell will publish a guide book on do’s and don’ts during disaster with all the details by this month end. The book will be available to public by January first week, he said.

Responsibility lies largely on the BBMP to respond during a calamity by facing all the practical hurdles that come its way. Since BBMP is the nodal agency to handle the situation, the Commissioner has to coordinate with all the other government agencies for swift response.

District Disaster Management Cell Liasion Officer K K Pradeep says that the BBMP should have a proper disaster management plan in place, defining the roles and responsibilities of each department in the time of crisis. Apart from this, they should also have a well-trained team of officials and staff who can immediately take up relief operations by joining hands with other civil defense forces.

However, reality appears to be quite different. The BBMP officials whom this reporter spoke to, though said that they were ready with contingency plan, they were not able to elaborate the same. Firstly, the BBMP does not have a separate disaster management plan for the city. In the absence of a plan, the city will have to refer to the Bengaluru district disaster management plan.

Secondly, the city lacks a disaster management centre dedicated specially for the purpose. In 2012, the Palike had decided to open Disaster Management Centres in all eight zones. It was planned to appoint a nodal officer for each zone. However, it has not become a reality even after three years.

When asked how the zones will manage in the absence of a Disaster Management Centre, R R Nagar Joint Commissioner Dr Veerabhadrappa B said that each zone has a control room and Prahari teams that will work 24X7. Prahari is the BBMP squad with vehicles that visit various locations to clear the flooding of streets, uprooting of trees and overflow of drains, specially during monsoon. In addition, all the BBMP officials are given walkie-talkie which will be of help during calamities, he said.

BBMP Commissioner G Kumar Naik informed this reporter that the BBMP will emphasise on capacity building and training a set of officers for the purpose. During the crisis, the BBMP will follow the standard operation procedure of the District Disaster Management Authority. A control room already exists (22660000) in BBMP head office which will be ramped up in case of disaster. The BBMP is also ready to offer medical help by pressing team of doctors into service at PHCs and government hospitals.

“Updating the current database about disaster prone areas, identifying and placing the right personnel at right place, promoting social network as a communicative tool during emergency are some of the areas that we need to look into,” he said.

He also opined that BBMP may not be prone to Chennai like flood,  as the city has better slope and gradation. “We have partially completed the survey of storm water drain encroachment. Once the survey is completed, steps will be taken to evict the encroachment. We will also take measures to improve the conditions of flood-prone areas,” he said.

Police do not have a major role to play in relief and rehabilitation work during the disaster. Their role is limited to making use of wireless communication system and maintain law and order, says Bengaluru Police Commissioner N S Megharikh.

Unlike home guards and fire and emergency service, the police are not specially trained to handle calamities. Police will only protect the belongings of citizens and ensure that miscreants do not misuse the situation, says the police chief.

Home guards comprising of trained staff to manage calamities will jump into action during the calamity as soon as they get directions from the police. Explaining the preparedness of Home Guards in tackling disaster in Bengaluru, B Amarnath, District Home Guard Commandant said that the home guards in Bengaluru are well-trained but not well-equipped.

“Since Bengaluru was not prone to natural calamities like flood and earthquake, the equipment are mostly provided to coastal regions which have high risk to disaster. As far as Bengaluru is concerned, urban flooding was not so expected. But, now looking at the Chennai calamity, perhaps, we need to work on new ideas and get equipped with latest apparatus,” he said.

Equipped with inflatable boats, hydraulic cutters and ladder trucks, Fire and Emergency Services has a huge role in managing any form of disaster. Bengaluru East Chief Fire Officer Basavanna said that the fire and emergency service personnel in Bengaluru are well-trained and equipped with highly advanced technologies.

There are 16 fire stations including five special units functioning in Bengaluru city limits. Each of the station has one or two inflatable boats and rescue vans that are pressed into service during flood. “We follow the standard operation procedure for disaster management under the supervision of the deputy commissioner,” he said.

The department also conducts mock drills to create awareness among public. A mock drill was conducted in Bengaluru two months back, he adds. 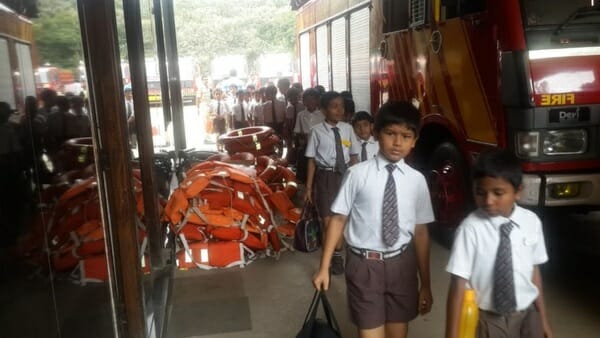 Civil Defence teams are the first respondents and second in command at the time of a disaster. Civil Defence, in simple terms, is defence of the citizens by the citizens. Civilians can voluntarily join Civil Defence organisation and undergo necessary trainings to respond during emergency situations.

Rajesh M S, Chief Warden for areas including Malleswaram and Subramanyapura said that civil defence volunteers play a major role in rescue, rehabilitation and relief work during emergency situations. They are the first set of people to attend the disaster location and work towards controlling the crowd, providing emergency service etc, even before the arrival of Fire and Emergency Service personnel.

It can be recalled that Civil Defence teams had played a significant role during Carlton Tower fire tragedy and bomb blast at Malleshwaram. Apart from basic training that is imparted at the Home Guards and Civil Defence Training Institute, Ulsoor, these teams are also handed with basic equipment. These teams have active Whatsapp groups, where the need for emergency help is passed on and the volunteers who are interested / available at the moment, attend to the emergency.

Though all these departments have a standard operating procedure in place, right kind of quick coordination among these agencies will be of utmost importance in an emergency situation.

Flooded roads and broken sidewalks in the Manhattan of Bangalore
How Bengaluru is helping Chennai during floods
Why Bengaluru is not immune to floods: It’s all about land (and money)

Why Bengaluru hospitals are refusing to admit COVID patients

Many private hospitals that the government empanelled for COVID treatment don’t have the necessary staff and facilities. Also, despite government orders, hospitals are only willing to treat patients who are routed by BBMP.

Aquifers in Bengaluru are over-exploited. Experts feel it is just a matter of time for parts of Bengaluru to be forced into a Capetown-like situation. World Resource Institute calls for a paradigm shift, from linear, centralised model to circular decentralised model of water supply.

Risking perjury, BDA has its way

The heat generated by citizens’ action contesting BDA’s Koramangala signal free corridor project is as much as the heat to come from the traffic snarls when four junctions here are dug up soon.