It is literally the neglected backyard of Bengaluru. When you enter the ill-fated village of Mandur, the pungent smell of rotting garbage fills your nostrils. You will have to bear it, till you leave the village. When the winds are strong, the smell too becomes strong. The village is just a kilometre or so from the dumpyard.

When we went inside Mandur past the police security on the main road, the sight of death welcomed us — villagers had gathered around the dead body of a resident, Narayana Rao, in front of his house, despite the curfew imposed. Rao had been suffering from respiratory problems the last three years. The villagers said another man, Krishnappa, has been hospitalised due to respiratory problems.

A shopper in Mandur, Prabhavathi, showed her itching hand which had turned red where she had scratched it earlier in the day. She says that her grandson suffered from skin allergy, which could not be cured locally. They had to take the child to bigger hospitals in the city. Many women, including Prabhavathi, have left their children or grandchildren at their relatives’ residences, far from Mandur. 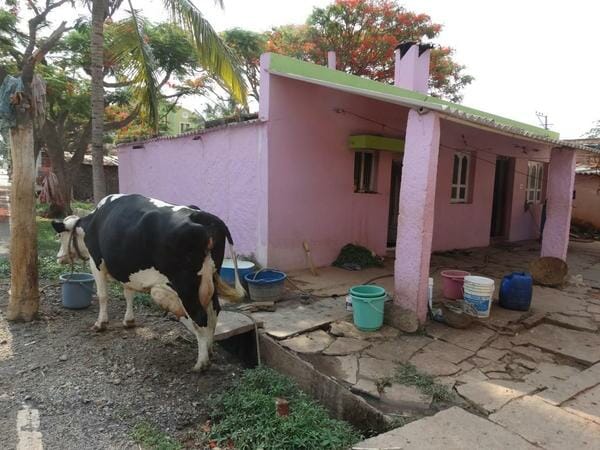 Cattle drink the water supplied by the Panchayat, which has been declared nonpotable. Pic: Shree D N

Water everywhere, not a drop to drink

The Panchayat has built many tanks in every street of the village, and there is 24X7 water. However, this has been declared non-potable by KSPCB and BBMP. The villagers cannot use it for drinking. They wash the clothes and utensils with this water.

BBMP has been supplying drinking water to the village by paying 750 rupees per tanker. However, the villagers claim that the quality of water is not good. Some villagers allege that the local politicians who have taken up the responsibility, instead of supplying clean water from a source 7 kms away, are supplying the local water through the tankers and billing BBMP.

However, this only clean source of water has been cut off since the villagers started protesting. The cattle and poultry in the village drink the polluted groundwater supplied from the Panchayat. Most villagers have cows their homes, and the village sends good amount of milk to Nandini Diary nearby. The villagers also grow vegetables and other food crops. Many of them complain about unexplained diseases among the cows and dogs, and withered crops.

The villagers are scared of revealing their names, as they suspect it will lead to problems in future. A villager on conditions of anonymity, said that when the villagers protested in 2012, they were pacified by some powerful persons who had joined them in the protest.

He alleges that after they stopped the protest, around 20 of the main protesters were taken on foreign trips. Another group was sent to the famous temple of Dharmasthala in South Canara district, in five buses. There was allegedly a biryani party arranged on the birthday of a local politician, where tokens were given to some chosen villagers to collect biryani! The politician named by the villager remained inaccessible to phone calls, hence Citizen Matters could not verify the allegations independently, or get his reactions.

This villager also says that this time people are united against politicians, and want to see the dumping stopped. He says earlier women were reluctant to come out, but this time women and youth too have joined the protest in large numbers. The BBMP Mayor and Commissioner who visited Mandur, he says, did not stop to see the fate of the villagers. He has left his two children in his in-law’s place in Mandya, after they suffered from skin ailments which took a lot of money to cure. 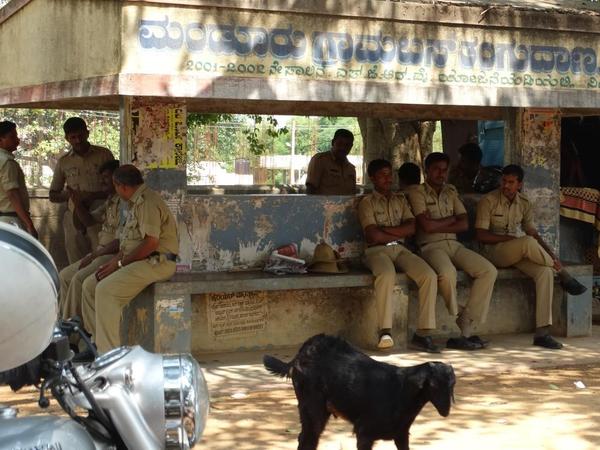 A visit to the small, three-room primary health centre at Mandur that had no beds and no laboratory did not give us much information. The woman in charge in the health centre said skin allergies and wheezing were the commonly reported problems in the hospital. The doctor was away in K R Puram for a meeting, and remained inaccessible to phone calls.

When Citizen Matters spoke to Ramalinga Reddy, In-charge Minister for Bangalore, he said that garbage crisis is the responsibility of BBMP. The state government can only give land for them to set up processing units. He also pointed that former BBMP Commissioner Siddaiah and former Chief Minister Jagadish Shettar had promised that they will stop sending garbage to Mandur from June. However, during the course of time, even when the government had many proposals in hand, they did not approve it.

“This time we have given approvals for four projects and also have given land. In eight to 12 months we can complete setting up projects (to process) 2000 Metric Tonnes. Once this starts, we will completely stop sending garbage to Mandur. More and more companies can come forward to process the waste and we assure them that there will be less hassle for paper work,” he added.

Use BBMP data to know why your ward has garbage problem

Bengaluru may not rank among the cleanest cities of India, but it has the most comprehensive grassroot-level plan for waste collection, which is awaiting implementation. The data for this is public now.

On the occasion of its 61st Bus Day, BMTC set out to improve safety measure for women on its buses. It also introduced additional Chakra services to improve connectivity in Yelahanka.