I thought I was smarter than the rest. Whilst people scrambled to bank ATMs minutes after our Prime Minister’s announcement about demonetization and the carefully framed narrative that followed, for me it was a bit of a waiting game. I had my credit cards and debit cards on me and some 100 rupee notes that had just been withdrawn a few days back before the much-touted surgical strike on black money happened.

I informed my maid and cook rather nonchalantly that their salary would be delayed and they manage the ‘small’ inconvenience for the larger national good. It was just a waiting game, after all, in which they continued to wait until I got in the ATM queue but that was their problem, of course.

Much like the waiting game that Geeta and Abdul talk about, but more about them a bit later. 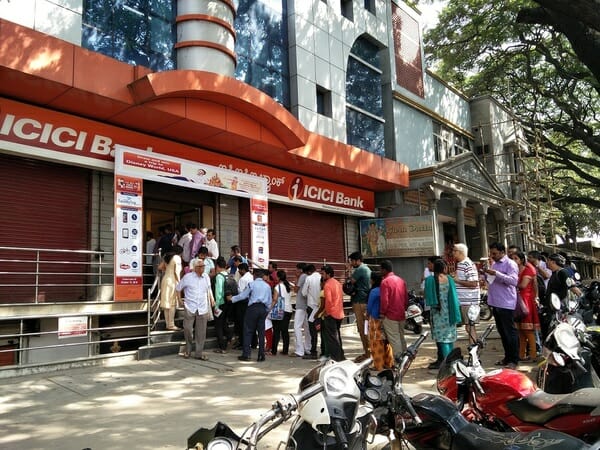 Long queues at the ATM are a reality even a week after the government announced its latest demonetisation move. Pic: Shree DN

Every time I drove down to work and back, I saw scores of poor unfortunate souls standing in the queues waiting for their hard earned money to come back via ATMs to them. One glance through the queues portrayed a myriad of backgrounds – housewives, executives, young software engineers, small time shopkeepers, students, senior citizens and a motley crowd – a snapshot of our typical street microcosm. The vehicle parking spaces near the banks were in chaos too, with crazy parking so characteristic of us Indians – haphazard two wheelers on footpaths and strewn all over in the bylanes next to the ATMs.

Try as hard as one could, neither by the look of those forming the queues nor in the modes of transport they came in could one spot any ‘typical’ black money hoarders who flaunt their stinking, mostly ill-gotten wealth at grandiose family weddings and birthday parties. All these people looked like ordinary hassled men and women in two wheelers or public transport attired in what looked like middle class, lower middle class clothes.

No politicians in starched white jabba kurta in the queues, no Guccis or Versaces, no billion-dollar conglomerate promoters lining up for Rs 2000 a day, no fancy cars or solitaires in view, and no bulging sacks of black money. Just plain, ordinary, harried, mostly tax-paying middle class or lower middle class citizens, soaked in sweat and dunked generously in a sense of manufactured faux altruism.

Given that these are the people one sees all around, trying to exchange or withdraw cash from ATMS after hours of queuing up, it is not surprising that the economic hit is being taken mostly by small businesses. Much of ‘below the radar’ small time businesses operate in cash, as it is the same government policies that do not allow them to access capital from the formal banking system. They are thus most affected by this decision that has led to small ticket cash transactions trickling like much of the water in our municipal pipes!

Imagine a poor subzi-wala or a kabadiwala going to the bank manager in any bank to ask for a loan and the sort of treatment that is meted out to him. No wonder that in this country of traditional micro entrepreneurs (who came up much before the venture-funded, cash-burning start-ups became fashionable), there is a parallel money market that operates with money lenders charging exorbitant rates and micro entrepreneurs eking out their living, sidestepping the formal system that refuses to acknowledge the value they bring to the economy and society at large.

My current work engaging with small time entrepreneurs gives me a rare, deliberate proximity with the class of people that most people would shun to associate with. Many of the people I work with now are waste workers, rag pickers and mostly Dalits who are shunned for their caste, class and socio-economic lineage.

Geeta (name changed) is one such entrepreneur in Bangalore who lends lights on rent to the street vendors, vegetable sellers etc. She makes a business transaction of approximately Rs. 1000 per day, all dealt with in cash on a daily basis. Ever since the demonetization move, her business transactions have taken a hit every day, because of the scarcity of smaller denominations for exchange. For the first two or three days, she barely earned Rs 700 a day; while business has partially recovered, she says it still has not risen to normal level.
However, she also adds that it is perhaps a good step as people holding huge amounts of cash in the form of black money will now come out. Does she have black money? Of course not – she has barely enough money to send her small kids to school and run her meagre household. So the propaganda seems to be working.
Another entrepreneur from Bengaluru, Abdul (name changed) has a different version on the move by the government. He narrates that even though his business has not been affected much by the move because he has a monthly payment cycle with his clients, his personal transactions for daily necessities are the worst-affected. He adds that even when they have money, they do not have food because of the unavailability of smaller denominations; people are merely managing by exchanging food and other things with neighbours.

Some households around him do have bank accounts and even debit cards, but they have hardly ever used plastic money, unlike the middle class and neo middle class who are resorting to cashless transactions to avoid pain through this transition. Talk to any auto rickshaw driver and he will say that his daily collection has come down as people do not want to part with change of Rs.100 and vice versa.

My poor neighbourhood sabziwala has agreed to issue informal  IOUs for all the veggies I buy from her, simply because I don’t have enough change and she would rather deal with IOUs than lose her business. She must be doing this with all her regular customers but then, her poor children need to have ragi and sabzi  for dinner and not IOUs.

Real inclusive growth would mean that all sections of society benefit from the overall economic prosperity. A primary metric for inclusion is financial inclusion, that is, uniform access to basic financial services and affordable financial products such as loans, basic accounts and deposits for all individuals and small businesses. When the really poor have access to such credit facilities, this translates to their financial security.

The smarter and resilient amongst them can then potentially grow their businesses, manage their own finances better and plan for the future. They become self–sufficient and not dependent on the state’s largesse or doles and contribute more to the GDP as well.

Don’t get me wrong. I am all for eliminating black money. This country desperately needs it. But the means are as important as the end. If the world of the Geetas and the Abduls are turned upside down to manage this disruption, while a certain bunch still makes merry at Mt.Titlis, maybe it is time do some deeper thinking. As for me, I am more humbler than smarter for now.
Disclaimer: Opinions expressed here are author’s own.

About Samit Aich 1 Article
The author has not yet added any personal or biographical info to her or his author profile.

Should Ramadoss ban spitting too?

He may have gotten famous for banning smoking, but perhaps Anbumani Ramadoss must take on the spitters too.