It’s a small audio studio on the fourth floor of Jain University Building on Palace Road, Bengaluru. A group of women sit on the floor in cosy room, circled around a recorder, speaking animatedly, giggling, and also participating in a radio play.

One of them narrates how an auto rickshaw person duped her, while others advise her how she should handle it next time. Another woman shares her experience of being cheated by the shop owner who distributes ration in the Public Distribution System in her area, while others explain her her rights and responsibilities, and how she could have avoided being duped.

The Stories they share will go into the making of the popular series Radio Mathematics, Season 2. The women incidentally produced a radio serial of 180 episodes in Season 1 weaving their life stories as a domestic help , with mathematics concept, thus paving the way to democratise knowledge .They are all domestic workers, who also double up as radio jockeys-turned-volunteer radio hosts, and volunteers at the station.

Being a voice for the voiceless

When Radio Active 90.4 MHz was launched, the aim was to provide a platform for the underrepresented and  misrepresented  communities of Bengaluru. Without much literature on the workings of an urban community radio stations, founder and director Pinky Chandran set out with the mission to provide a space for various communities to create their own media that was based acceptance of diversity, respect and inclusion.

Ever since its inauguration on June 25, 2007, Radio Active 90.4 MHz has spread its reach to listeners throughout Bengaluru with daily shows that focus on people and issues often overlooked in everyday life, in addition to being a space for alternative voices.

“Our vision was very clear from the time of the launch, that we wanted to widen community involvement in broadcasting,” Pinky said. “We wanted people to create their own media in their own language, their own dialect, in their own style.”

The twenty-four hour channel provides 10 to 11 hours of original content a day, with an average of 10 shows a day. Largely volunteer-based, Radio Active 90.4 MHz, each show is hosted by a member of the particular community or institution  in which the show is focused on, discussing relevant topics or issues and speaking to others in the community or experts.

Whether it is sexual minorities, informal waste workers, garment workers or many others, the station has been a platform for diverse voice and change for the last decade. Each community represented here has decision-making power over how to present their show. From what topics to discuss, what language to broadcast in and who to interview, everything is organised by the Radio Jockeys and their community committees. Community groups meet often to discuss ideas and assist the RJs representing their particular community in planning the next segment.

Pinky recalls the quote she read once: “Go to the people, live among them, learn from them, plan with them, work with them, start with what they know, build on what they have,… learn by doing, not a showcase but a pattern, not odds and ends but a system, not piecemeal but an integrated approach, not to conform but to transform, not relief but release,” – in Principles of Participatory Development and Credo of Rural Reconstruction, by Dr Y C James Yen.

“Hence we made a conscious decision to apply the same principle in reaching out to the different communities and so we did workshops across Bengaluru, shadowed them and  mentored them until they were ready to produce their own programmes,” Pinky adds.

The many shows aired on Radio Active 90.4 MHz  range from Civic and Governance including issues of health, education, water, food security, environment etc, Community Based programs like that of Kasa Shramika Parisara Rakshaka is about issues of identity and labour rights of waste-pickers, to that of rights like Child Rights, Labour Rights. There are at least six languages regularly broadcast but many others make appearances along with countless dialects spoken over the airwaves.

Since 2012, the husband wife duo  Siddique Pasha and Salma Khanum host Kasa Sharmika Parisara Rakshaka ( meaning waste pickers are the saviours of the environment)   a daily show addressing issues and topics involving the waste picking community in Bengaluru. Every month, the waste picker community holds a meeting to brainstorm program ideas that Pasha and Salma then pursue as stories for their show. The segment covers a range of subjects including education, access to ID cards, child rights, nutrition, housing, problems and solutions of running scrap shops, dry waste collection centers ,  the need for donating dry recyclable waste  etc. The programme is supported by the nongovernmental organisation Hasiru Dala.

Pasha and Salma  go out early in the morning to interview waste pickers while working and travels around Bengaluru for stories. Pasha said the segment on Radio Active 90.4 MHz has helped the waste picking community to become more confident and has helped build an identity. There are fewer stigmas surrounding the community. Pasha says people now, “speak with an open heart and are comfortable and are known.” He adds that the waste picking community employed in dry waste recycling would not be where it is today without the station as a platform to talk about these issues and  Hasirudala, the organisation.

Shilok Mukkati began her radio career as a volunteer for Radio Active 90.4 MHz in 2015, to fill in for RJ Priyanka, the country’s first transgender RJ.  She is now a full time RJ specifically focusing on gender and sexuality issues. Shining a light on anyone from a lawyer, engineer, student and all others, Shilok’s radio show Colorful Kamanabillu shares personal stories of sexual minorities in Bengaluru. Some program topics include mental health, activism, the queer movement, legal language and coming out. 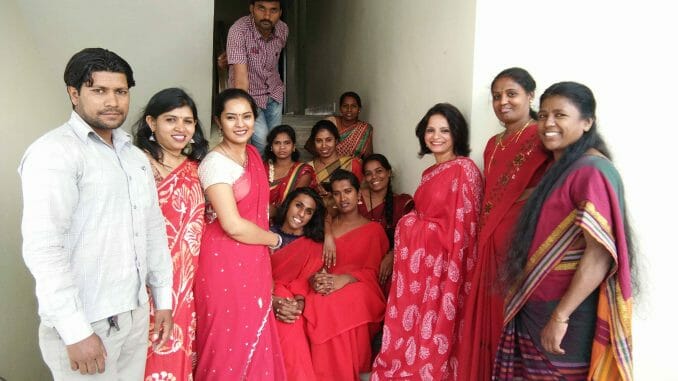 “There are some people who come and share their stories which they have never shared to anyone.. Listening to them talking about their life, the stories that have always been in the closet, is therapeutic for many people,” Shilok explains. “It has built a lot of confidence among themselves and I have seen people who are doing amazing today,” she adds, explaining how people who weren’t open about their sexuality attending the show and getting involved, to work for the community.

Every Thursday Shilok attends a Good As You meeting, an informal LGBTQIA+ (Lesbian, Gay, Bisexual, Transgender, Queer, Intersex, Asexual) support and discussion group. She sources story ideas from others at the meeting as well as attending events and networking within the LGBTQIA+ community for new topics and people for her program. She adds that her radio show also helps spread the word of LGBTQIA+ events and movements around Bengaluru.

Voices behind the movement

There are eight to ten full time RJs on staff who each host their own shows about issues concerning communities they identify with. Priyanka is the first transgender RJ in India. She was nominated by the sexual minority community  to represent and host the show “Yari Varu”, in May 2010. The issues covered range from identity, education, unemployment, lack of housing facilities, social security, stigma and discrimination, sexual harassment, issues of homophobia, and criminalization of the community.From representing the voices of the LQBTQI community, she has now come a long way and hosts show on other issues such as Trash Talk, Animal Welfare and does all the outdoor broadcast.

Padmapriya interned with the station while studying her Masters in mass communication and was eventually joined the station in 20088. Since then she has been hosting shows focused on mental health and women’s rights and social movements  including the Universalisation of pension and Public Distribution System. The stories  range from  women who have struggled with domestic violence, dowry issues, sexual abuses, harassment, and coping with working full time while raising a family and discussions on mental health with the goal to eliminate stigma.

Vijaya A, an RJ with 15 years of experience, started her career at Radio Active 90.4 MHz hosting segments on children’s rights, menstruation , child labor and right to education. She also hosts shows on native cooking featuring different recipes from around India, folk music, water and sanitation and the history of Bengaluru.

Hoping for acceptance of role of community radio

“We consciously reach out but we also get the existing community members to mentor new communities, share the experiences, talk about how the process has been, what they need to do and all that so it’s constantly evolving,” Pinky said. “So we keep saying that each community mentoring another new community adds to the whole support network and just becomes more community-centric.”

When asked where she would like to see community radio in the next ten years, Pinky said: “It would definitely be with policy changes in terms of accepting that the community radio plays a very very important role even in a city like Bengaluru because we have heterogeneous identities and we have multiple communities.”

About Kennedy Wirth 11 Articles
Kennedy Wirth is an intern for Citizen Matters from Seattle, WA. Follow her on @kennedywirth.

The one who has excess food can make sure the food isn’t wasted, by donating it. The needy receives the food with dignity. Public fridges are a novel way to help the needy – both donators and receivers.

Kala Madhyam mela back at CKP

This mela is a much awaited event in the Bangaloreans’ calendar. Get your fix of handmade handicrafts from across the country at Chitrakala Parishath.