I know all your birth dates by now and I surely do not want to wish you on your birthdays ever! I also know that you wish your voters on every possible occasion, even though it makes no real difference to their lives, and you haven’t made any sincere effort to make that happen! 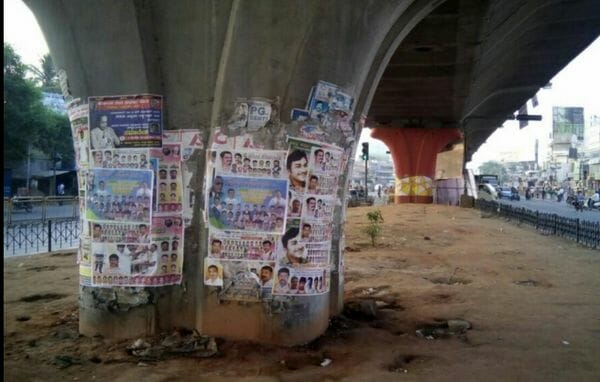 Bills and posters under a flyover. Pic: HaSiRuMitra team

Yes, you and your party workers have successfully made Bengaluru ugly with all those banners, hoardings and posters, which to my guess are mostly unpaid and unauthorised.

What is more amusing and shameful is this: You people are in all parties, but many of you netas are from BJP, a party which our Prime Minister Narendra Modi is a part of. The Prime Minister speaks about Swacch Bharat passionately and eloquently. He has been asking people to clean the roads, locality, city, state, country etc — and all you do is make the city of Bengaluru ugly, dirty and filthy every day and disrespecting the PM himself and the values he stands for!

Thanks to the BBMP, the city is infamously christened as ‘garbage city’ and you people are busy adding and other tag of ‘ugly city’. A rap on BBMP by courts and Lokayukta has made no difference; BBMP has shown no will or spine—they continue to follow the diktats set by politicians. The city is not only getting uglier by the hour, but also is losing revenue, as none of you pay for these horrendous banners, hoardings and posters. 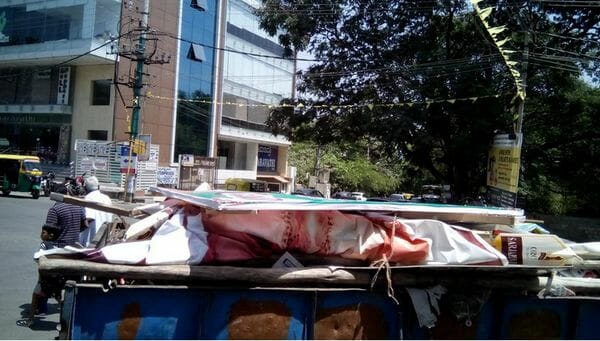 Even a small fee of Rs 1 per banner/hoarding/poster per day would mean cores of revenue for BBMP. Additionally BBMP ends up using tax payers money to remove/clean/dispose them. Those ridiculous flex banners you proudly display your photos on cannot be recycled; and it ends up in the landfills creating a few more Mandurs!

Spare a thought. The city is already suffering from air pollution, water pollution, garbage, noise pollution, traffic jams, pot holes. So don’t add ‘visual pollution’ to the list. Think about it—what feelings can I harbour on you, if I all that I get to see are faces of you and your party workers almost mocking at my fate, when I am stuck in a traffic jam?

Stop making a mockery of the system using your political forces. You have wiped-off the revenues for BBMP and are using the tax payer’s money to clean up your mess. Help the city that is struggling to survive; spare the city from your posters, banners, hoardings and the public nuisance you are indulging in. Also save yourself from future public humiliation!

City of Bengaluru needs a break from your ‘political litter’— and mind you, the #KillBills Team is here to get rid of your mess before naming and shaming you!

Over 100 college students are aiding Bengaluru’s pourakarmikas during COVID. Here’s how.

Bengaluru’s pourakarmikas are suffering from delayed wages and poor work conditions even through COVID. A group of college students are now distributing ration kits and sanitary pads to these workers by raising funds on social media.

Over two years, this RTI activist in Basavanagudi has tried to ensure BBMP follows due process while laying roads, even petitioning the Lokayukta. Check what BBMP is supposed to do.

BBMP is going back and forth on whether they will collect garbage from apartments, whom they term bulk generators? If they don’t, how do apartments handle the generated trash?