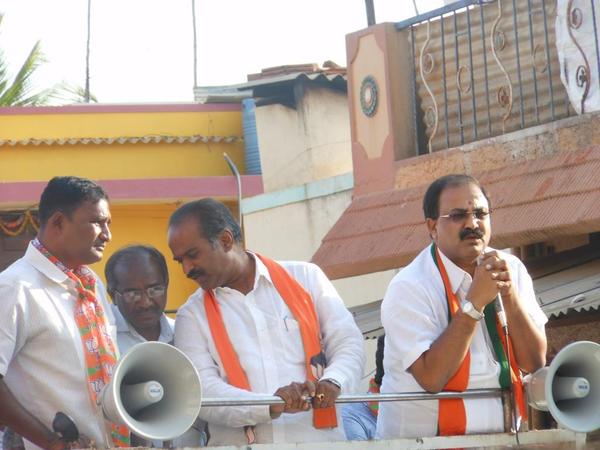 P C Mohan had made many promises in 2009, when he contested Lok Sabha elections from Bengaluru Central. Many voters wonder what he has done, even as a survey shows him scoring well on many fronts.

As a candidate to the 2009 Lok Sabha elections, this is what PC Mohan promised in an interview with Smart Vote.

* 3 priorities of your constituency?

* How do you plan to address these issues in parliament?

Certain issues can be sorted out in state, some need grants. Whatever is required I will do.

* Most important issues facing the nation that you will raise in parliament?

* Most important contribution to public life.

As 2-term MLA in Chickpet, I have developed basic infrastructure like roads, SWD

* How will you be accessible in your constituency? How will you make public your performance on various promise you have made here?

During parliament session, I won’t be available. Rest of the time, I will be accessible. Have launched a website for the convenience of constituents. I will be updating my activities.

* What do you plan to do regarding corruption and terrorism?

Our party is fighting for this. We will see it is eradicated

* How will you ensure money meant for development projects is not misused.

Whichever fund comes under my constitution or state, I will see it is used properly.

* Will your experience as a MLA help you as an MP?

Issues of state, I can take up.

* On unemployment and moral policing.

Our party is against moral policing. We have taken strict action against it. Unemployment, our government has a lot of schemes to generate employment.

As a Parliamentarian – his attendance is 70%, he has participated in five debates (compared to a national MP average of 36 debates) and asked 252 questions – he has been below average.

P C Mohan did not ask too many questions that were relevant to his constituency/state. However, he has asked some pertinent questions to various ministries. Among them were the issue of steep price rise in edible oil, steps taken by the government, inflation and malpractice by banks that levied a penalty on customers despite early repayment of loans.

PC Mohan also placed questions regarding loans to unemployed people, cases of atrocities against SCs/STs/weaker sections and minorities community. He also asked about the government’s pension schemes for the unorganized sectors.

Setting up of model schools under PPP mode, need for better waste management and plans by the government etc also featured in his questions.

At the candidate meeting organised by BPAC, Mohan has claimed credit for Metro, introducing KSRTC buses and upgrading the city Railway stations. Click to see PC Mohan in parliament raising the issue of Bangalore Railway station.

Many of this can be seen in his MPLAD funds expenditure. Read: Check what your MP has done: P C Mohan, Bangalore Central

In a constituency where according to the Daksh survey, the MP has consistently outperformed his fellow Bangalore MPs, the biggest concern for residents is that of drinking water. While availability of water has been an issue which has plagued the whole city, the residents of this constituency have explicitly voted this as the number one theme in terms of importance.

According to the Daksh survey, Mohan’s performance on Drinking Water is: 8.5/10. In the candidate meeting organised by BPAC, PC Mohan claimed he had brought in 500 MLD of water to the city.

Coming a close second for citizens, is the issue of reservation for jobs and education. Environmental issues comes in third, while encroachment of public spaces once again finds mention in this constituency as well. Rounding up the top five is the demand for better roads.

In all these parameters, citizens’ perception of his performance is good, as projected by Daksh survey.

Reservation for jobs and education – 8.6

P C Mohan has not been very visible in his constituency according to residents we spoke to. Narsimha Murthy, a human rights activist from Shivaji Nagar, says “Frankly I haven’t seen him. It is only recently after he filed his nomination that I heard about him in the media.“

Anjali Verma, a resident of an apartment complex at Challaghata, says “For us, the civic issues matter a lot as it directly affects us. Before the elections, P C Mohan was visible and he actually helped us to fix our bad road.  However, after the elections the roads are in bad shape again, but we didn’t hear from him at all. Neither did he visit us nor did we contact him.”

Some readers may find it baffling to see the performance scores of P C Mohan – given he has not been visible in public eye and not known to take up any serious issue in parliament.

He responded to this in the BPAC meeting, explaining, “I am in opposition – only two hours is provided for opposition in debates. Out of that, one hour is used by leaders. Only one hour is dedicated to 100 leaders. We don’t get a chance. Only one hour is allocated for questions – all questions don’t get chance. Ballot decides which question comes up for debate. You have to see all these when looking at records.”

A quick research of news related to his involvement in issues related to his constituency reveals just two prominent engagements – attending a local protest against a prominent city mall (and we don’t know what came of that protest). Ironically, he had participated in the inauguration of the same project a year ago.  He attended an official meeting aimed at solving Bangalore’s garbage crisis – probably because Mandur lies in the Bangalore Central constituency.

Narsimha Murthy says, “I read in the newspaper that he brought Metro and has done a lot for infrastructure, but where was he when 1500 houses of EWS quarters were demolished? Where is he when pourakarmikas get paid only Rs. 2000 to Rs 3000 per month? What has been his contribution? He has done nothing for the poor!”

On accessibility, Mohan has scored 7.3. PC Mohan defended himself at the BPAC event, “Nobody has ever complained that I haven’t been accessible. I’m always at my office. Weekly thrice, I have been meeting people. Ask the people who come to me. I have even done MLA and corporator work, as they were not accessible to people.”

What has Dinesh Gundu Rao been up to in five years?

Dinesh Gundu Rao handled Food and Civil Supplies Department as a Minister. What else has he been up to?

431 candidates in 27 constituencies: Which ones are yours?

Elections are a great time to analyse many issues that go unexplored otherwise. Take a look at the data compiled, to see the trends and patterns. Go through what we have compiled, to make an informed choice!

May 1, 2018 Gauri Mullerpatten and Shravya Sharath

He is young and enthusiastic, and taking on Ramalinga Reddy from BTM Layout. Dr Syed Abbas from Aam Aadmi Party talks about his work and ambitions.